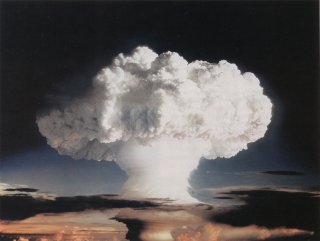 THE SOVIET Union’s detonation of its first nuclear device in August 1949—just four years after the end of World War II—is remembered as a startling event for the United States and its allies, who had expected the American monopoly on nuclear weapons to endure for several more years. Yet for all the shockwaves the test sent through Western governments, the world learned of the event not from a triumphant Soviet declaration but rather when President Harry S. Truman revealed its occurrence several weeks later. The United States’ conclusion that the USSR had tested a nuclear device followed the routine flight of a U.S. Air Force WB-29 weather reconnaissance aircraft from Japan to Alaska a few days after the detonation. Outfitted with filters to pick up radiological debris from an atmospheric nuclear test, this collection platform provided U.S. and allied scientists with the basis for Truman’s dramatic announcement: “We have evidence that within recent weeks an atomic explosion occurred in the USSR.”

The United States’ detection of the first Soviet nuclear test involved a set of scientific disciplines now commonly known as nuclear forensics. First developed for nuclear test monitoring and treaty verification purposes during the Cold War, modern nuclear forensic capabilities are now used to determine the provenance of nuclear materials found outside of regulatory control, such as those seized from nuclear smugglers. Additionally, if a terrorist nuclear device were interdicted before detonation, analysis of the nuclear material and device design may yield information about its origin and manufacturer. Should terrorists succeed in detonating a nuclear device, post-detonation debris analysis can help determine the source of the nuclear material used in the weapon, as well as provide insights about the device design that may help identify the perpetrator. Like criminal forensic analysis of blood samples, hairs, and fibers from crime scenes, the data gathered in the nuclear forensic process can help attribute the malicious use of nuclear material, including a hostile government’s provision of plutonium or uranium to terrorists.

Although the link between nuclear forensics and the prevention of nuclear terrorism is widely understood—and embedded in numerous policies and legislation—there exist many less familiar but equally vital functions of these tools. Nuclear forensic capabilities can today be used to attribute or resolve ambiguities about a wide range of what might be termed “unattributed nuclear events,” both malicious and unintentional. These include undisclosed accidents at civil or military nuclear facilities, nuclear weapon mishaps in denied geographic areas, or perhaps even an accidental nuclear detonation. Other ambiguous scenarios may involve a state’s limited use of nuclear weapons in a regional conflict and subsequent denial thereof or an attempt to blame a clandestine nuclear attack on non-state actors. In addition to the intrinsic effects of these scenarios—lives lost, economic disruption, environmental degradation—each may create conditions in which uncertainty about what happened and who was responsible could lead to cascading effects of far greater magnitude.

Among the lessons learned from a variety of nuclear incidents and accidents over the decades is that there will always be a strong need for dispassionate science during fearful events. To the extent nuclear forensic capabilities can be refined, and analytical findings shared internationally, these tools can assist decisionmakers in grappling with nuclear crises and may help avoid many such incidents in the first place. To realize this promise, however, investments in forensic capabilities must be commensurate with their potentially significant deterrent effects, and national policy requirements must drive advances in forensic science as a complement to other elements of the nation’s nuclear deterrent. Additionally, the broad role technical forensics can play in nuclear deterrence—not only in deterring state support for nuclear terrorism but also helping to reduce many other nuclear threats—must be made more central to the U.S. strategy of deterrence. Only when international perceptions of the efficacy of these tools are more widespread will forensic capabilities influence foreign decisionmaking in the way nuclear weapons themselves have since the beginning of the nuclear age.

A BRIEF review of the historical applications of nuclear forensics underscores the surprising diversity of these disciplines and perhaps foreshadows the breadth of scenarios to which they may be applied in the coming years. Although the Department of Energy’s National Nuclear Security Administration (DoE/NNSA) national laboratories are principally oriented toward the design and stewardship of U.S. nuclear weapons, the forensics mission attests to the extraordinary range of the laboratories’ scientific contributions to the nation’s defense. From the Cold War genesis of these capabilities to the present day, the history of nuclear forensics suggests that this mission may be coming full circle as the world reverts to an era of renewed great power competition.

Forensics in Nuclear Test Monitoring and Arms Control Treaty Verification. Throughout the Cold War, each of the nuclear powers developed technical capabilities to collect data from not only their own nuclear explosive tests but also others’ as part of an effort to learn as much as possible about foreign nuclear capabilities. These tools included purpose-built detection aircraft, seismic and acoustic sensors, satellite-based detection platforms, and other more unorthodox collection methods. In March 1954, for example, when the crew of a Japanese tuna fishing boat was contaminated by nuclear fallout from a U.S. thermonuclear weapon test in the South Pacific, Lewis Strauss, then head of the Atomic Energy Commission, speculated that the boat was serving as a Soviet collection platform. Having not yet mastered two-stage thermonuclear weapon technology, Soviet radiochemical analysis of the fallout could have provided useful insight into the design of the U.S. device.

Today, hundreds of sensors scan the Earth’s surface and subsurface for the unique signatures of an underground nuclear explosive test, many of which comprise the International Monitoring System (IMS) that was established to monitor nuclear testing under the Comprehensive Nuclear-Test-Ban Treaty. Between April 8-9, 2013, for example, an IMS radionuclide station in Takasaki, Japan, detected substantial quantities of the noble gas xenon—a fission product associated with nuclear detonations—which was also detected days later at a station in Ussuriysk, Russia. These detections lent credence to North Korea’s announced nuclear test on February 12, which had also been detected by ninety-four IMS seismic stations around the world. Complementing these sensors is a constellation of geospatial systems specifically designed to detect nuclear explosive tests. Once a nuclear test or event is suspected of having occurred, an array of scientific and intelligence capabilities is brought to bear to provide greater fidelity to test assessments.

While much of the data concerning a nuclear test or incident is collected from sensors and instrumentation built specifically for this purpose, some useful information can be derived serendipitously. One such example is Vela Event Alert 747, also known as the Vela Incident, in September 1979, when a U.S. Vela satellite detected a mysterious double flash of light in the Indian Ocean. Although the cause of the flash has never been conclusively proven or acknowledged, the event is widely believed to have been a clandestine nuclear test, and scientists have spent the last forty years attempting to prove this hypothesis. One recent—albeit controversial—study analyzed previously unavailable data gathered during radiation testing of the thyroid organs of Australian sheep in the months following the incident. Researchers concluded that levels of iodine-131 found in the animals’ thyroids was “consistent with them having grazed in the path of a potential radioactive fallout plume from a 22 September low-yield nuclear test in the Southern Indian Ocean.” On another occasion in 2007, U.S. technicians detected traces of highly enriched uranium (HEU) on aluminum tubes in North Korea that the United States suspected were imported to support a nuclear weapons-related uranium enrichment program. North Korean officials claimed the tubes were being used for conventional weapons and presented two such systems for inspection. The discovery of HEU traces on the tubes added to suspicions that North Korea was pursuing a uranium route to nuclear weapons in addition to its already known plutonium-based weapon program.

Although scientific forensic capabilities have been used to detect state-based nuclear activity for more than seventy years, a more recent incarnation of these tools has involved the non-state nuclear threat. The prospect that terrorists might build and detonate a crude nuclear device was first studied intensively in the 1960s and 1970s; by the time the Soviet Union collapsed in 1991, this possibility had emerged as a potent concern. While the immediate response to this danger was a scramble to secure fissile materials in the former Soviet Union, strategists have grasped ever since for additional means to reduce the likelihood that terrorists could acquire a nuclear device. Only more recently has the utility of deterrence been recognized to help achieve that end, as has the necessity of nuclear forensics to fortify deterrent threats.

Forensics in Deterring Nuclear Terrorism. The applicability of deterrence to nuclear terrorism is somewhat counterintuitive given the seemingly undeterrable character of many non-state groups. Because religious or ideological fanatics may not fear death or hold territory that can be attacked in reprisal, deterring would-be nuclear terrorists generally takes the form of “deterrence by denial.” That is, decades of U.S. and international efforts have made nuclear materials extremely difficult for non-state actors to acquire, and vast intelligence resources are dedicated to detecting and disrupting terrorist plots. Consequently, terrorists have made little effort to obtain nuclear capabilities despite a clear interest in these weapons. Yet, terrorists could receive external assistance in acquiring nuclear weapons or materials, including from unscrupulous governments. In this scenario, the more recognizable form of deterrence—threatening a hostile state with unacceptable retaliation—can play an important role in preventing a terrorist nuclear attack. By signaling that a state’s facilitation of nuclear terrorism will be considered virtually synonymous with a direct nuclear strike, the United States has made clear that the costs of providing such assistance to terrorists will always outweigh any conceivable benefits.