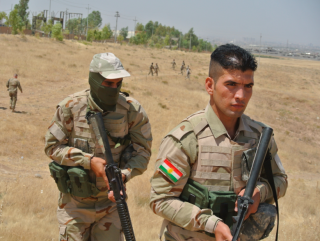 In December of 2015, the Iraqi Army retook Ramadi from Islamic State. Eighty percent of the city of five hundred thousand lay in ruins, and many of its buildings were laced with IEDs and booby traps. The first Iraqi teams sent in to demine the buildings suffered 80 percent casualties.

Standing in the 110-degree baking sun at Bnaslawa training base near Erbil in the Kurdistan region of Iraq, the experience of Ramadi was in the minds of the trainers who are helping the Kurds learn combat skills, ranging from infantry tactics to the use of mortars, before being sent into the field. In one area Kurdish peshmerga, the armed forces of the Kurdistan Regional Government, were training to clear a dry riverbed so that an infantry column could pass through. Walking three abreast the men swept the dirt and gravel for fake IEDs and marked the “safe” path. “Our experts say they have never seen things like what ISIS has done, even in Afghanistan. The motivation of ISIS is destruction,” said a coalition trainer.

Under the umbrella of the Kurdistan Training Coordination Center of the Combined Joint Task Force–Operation Inherent Resolve, seven partner nations are providing what they call “capacity building” for the Kurds. This includes Italy, the Netherlands, Finland, Germany, Hungary, Norway and the UK. Among the training is the work to detect and demine explosive devices left behind by ISIS.

The more well-known parts of the coalition mission fighting ISIS have been the air strikes and the advise-and-assist part of the mission that is based in Erbil, Makhmur and other places. On a recent visit with several peshmerga units fighting ISIS, there was ample evidence of this. We saw Black Hawk helicopters ferrying special forces around Telskuf in the northern KRG, and heard stories about special forces on the frontlines near Bashiqa. Near Makhmur’s Kara Soar base, the U.S. First Battalion of the 320th Field Artillery Regiment is providing support for the Iraqi army and Kurds in operations around Qayyarah.

A coalition spokesman who fought in Iraq against the insurgency in 2005, and during the surge, says that what the coalition is doing now, through its capacity-building program, is aiding, training and allowing the Kurds to make their own plans and timelines in the war on ISIS. Since early 2015, the coalition has established three training bases in the KRG: one at Manila near Sulaimaniyah and another at Atrush atop a mountain near Dohuk, as well as Bnaslawa. In mid-July there were five hundred Kurds, including thirty-five female peshmerga, training at Bnaslawa, cycling through courses that last up to ten weeks. One coalition trainer said that eight thousand Kurds have passed through this base so far. Many of the men have already been in peshmerga units and have previous local training. For the trainers, this can be a struggle, because they are not able to take a soldier as a blank slate and build him up from scratch. “It’s difficult if they learned one way, and to tell them not to do it that way, when they’ve been first taught the wrong way,” said one trainer.

At one section of the base, a dozen Kurds listened to a German man explain how to use a Panzerfaust 3, the German army’s antitank weapon that was first introduced in 1992. A large Kurdish soldier was shown how to hold and position the three-foot-long black weapon that weighs thirty pounds when loaded. In a classroom nearby, the peshmerga were learning how to calculate distance and trajectory for mortar fire, while actual mortars were out in a field to be examined later by the students. Some men seemed a bit perplexed by the math, but they were enthusiastic about receiving the information. Most peshmerga units do not have many mortars, and are undersupplied with heavy weapons such as antitank missiles. In almost every headquarters, the Kurdish officers will say they sometimes have one MILAN antitank system for a dozen kilometers of front line. Units will sometimes have just a few outdated RPGs. Providing this training and outfitting brigades with the proper heavy weapons will be a game changer for the peshmerga.

In fields around the classrooms, peshmerga practice platoon- and squad-level infantry training. A dozen men are deployed to capture a position by “bounding” towards it, with several men advancing while others cover them. The U.S. spokesman said, watching the training, that the Kurds were doing a good job absorbing the infantry training. The Kurds are trained with M-16s, with which they also practice live fire. This is a bit confusing at first, because most Kurds come to the course having used AK-47s in combat. The European trainers come to northern Iraq with experience on a G3 or other firearms. At the end of the training the Kurds are issued with the M-16s they have trained with.

Two complete brigades have been outfitted through this mission. This means Kurdish units return to the frontline with body armor, radios, helmets and other standard equipment that is often missing from peshmerga units. In a year and a half reporting from Kurdistan, I’ve rarely seen soldiers wearing helmets, and M-16s tend to be seen as a luxury item kept near headquarters units. According to the coalition spokesman around fifty MRAPs, eighty Humvees, fifteen mine rollers and ambulances have been provided to the Kurds, valued at $150 million. In addition, “the U.S. will spend $22 million dollars to provide sustainment training and spare parts to help ensure the peshmerga can maintain their equipment.” This, along with such essential skills as minesweeping and anti-IED training, will save lives and professionalize the Kurdish forces in their war on ISIS.

The training at Bnaslawa is part of the larger support for the Kurds in their war on ISIS. On July 12, Acting Assistant Secretary of Defense Elissa Slotkin signed a memorandum with the KRG that provides for direct funding of the peshmerga without sending the money through Baghdad. Over the last year and a half, the Kurds have complained that finances and support intended for them have been kept by the central government. Kurdish soldiers are often paid inconsistently due to a financial crisis, with some men on the line telling me that they received only two paychecks for seven months of service. There are thought to be around three hundred thousand peshmerga, costing Erbil more than $1.5 billion. The United States is increasingly recognizing the need to help fund Erbil’s expenses in the war on ISIS and include the KRG in discussions with the rest of the coalition.

The main goal of the coalition training and the U.S. support is a successful operation to defeat ISIS and liberate Mosul, Iraq’s second-largest city, from ISIS sometime this fall. In addition the support for the Kurds will provide stability and professionalization of their armed forces. Defeating ISIS is only one part of the puzzle. Not leaving a vacuum when ISIS is defeated, the way a vacuum was left after the surge in 2008, is an essential goal, and the Kurds play a major role in that.