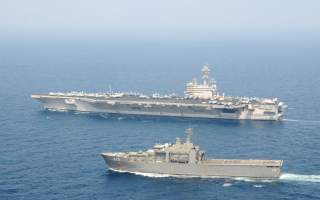 Ever since the Defense Minister of Singapore, Dr, Ng Eng Hen talked about the prospect of acquiring what is called a Joint Multi-Mission Ship (JMMS) in late June last year, speculations about the true nature of this vessel—allegedly an aircraft carrier in disguise—have been swirling.

Most recently, writing for DefenceAviation, Marvin Diaz noted, “it doesn’t take an expert to look beyond the pretentious façade of the vessel.” But perhaps Singapore is not trying to be pretentious at all.

The International Institute of Strategic Studies (IISS) defines an aircraft carrier as a ship “with a flight deck that extends beyond two-thirds of the vessel’s length.” Yet there is no accepted standard definition of what constitutes an aircraft carrier. Countries that acquire carriers may categorize them as whatever is politically expedient.

For example, the Soviets called their Kiev-class aircraft carriers “large aviation-carrying cruisers” to circumvent the Montreux Convention so as to be able to sail through the Bosporus Strait. The Japanese called their Hyuga and larger follow-up Izumo classes “helicopter destroyers” in order to avoid misperceptions.

So indeed, the JMMS fits the “aircraft carrier” criterion insofar as physical characteristics are concerned, going by the IISS definition.

But Singapore has not labeled it as a JMMS in order to obscure its true purpose as an aircraft carrier. Beyond physical characteristics, it is necessary to examine the inherent design of the vessel, as well as looking at it as a system of systems, in order to decipher its actual roles and functions. In other words, a ship may have the physical characteristics of an aircraft carrier but it may not be optimally designed as one. More importantly, it may make little strategic sense to be deployed as such.

Endurance-160 as the Reference Point

The construction of a JMMS should also not come as a surprise to anyone. Singapore’s indigenous shipbuilder, Singapore Technologies Marine (STM) has already demonstrated it can construct a through-deck warship, designated Endurance-160 Multi-Role Support Ship. It was first unveiled in 2010 and its replica was even displayed at Euronaval 2010.

Reportedly inspired by the Italian San Giorgio class, the Endurance-160 was originally intended for the export market but to date has found no foreign buyer. This can be attributed to the competitive market for through-deck multi-role support ships. STM has to compete with numerous competitors in the West and Asia. As it stands, Singapore has the potential to become the first customer of the Endurance-160.

(Recommended: The Most Dangerous Nuclear Threat No One Is Talking About)

Physical size does matter. In theory, the larger the hull, the bigger the physical capacity that translates into bigger payload, better range, endurance and sea-keeping qualities. But the inherent design of a ship may be the more decisive factor in determining the actual roles and missions it is intended for.

(Recommended: 4 Future U.S. Weapons of War That Should Be Canceled Now)

There is really no pretense about what JMMS is designed for. It is a multi-role vessel configurable for several different missions—amphibious assault, humanitarian assistance and disaster relief (HA/DR), replenishment, hospital ship, command and control center, and so on. A full flight deck along the ship’s length merely means it can support a greater aviation capacity and flight operations.

This ship also has a pair of rectangular-shaped aircraft elevators, which appear to be designed for helicopters. In all, the ship is supposed to carry five medium and two heavy helicopters on a flight deck sporting five helicopter-landing spots.

For sustained operations in open seas, with rougher inclement weather and higher sea states, parking the planes on the flight deck, even if properly secured, exposes them to the elements. There is no way the machines can be stored above-deck because the island superstructure is too small to accommodate a suitably sized hangar.

As such, the hangar necessarily has to be internal. It is found right below the flight Deck 6, which can also store light vehicles. It also has a hoistable vehicle ramp. From schematic drawings, it is not difficult to see that space is a premium in the internal hangar. It is the only place that offers full, all-weather protection for aircraft.

Judging from the dimensions of the onboard spaces, it becomes clear that the Endurance-160 is optimized more as a helicopter carrier. If the Endurance-160 is to serve as an aircraft carrier, vertical short take-off and landing (VSTOL) fixed-wing aircraft, such as the F-35 Lightning II Joint Strike Fighter which Singapore is reportedly close to purchasing, are the only feasible options.

Furthermore, significant modifications would be required, the easiest of which would be the application of special anti-flash coatings on the flight deck. Modifying the aircraft elevators, especially for fixed wing aircraft even with foldable wings, will prove to be more challenging.

Indeed, because of the larger maintenance space required for fixed-wing aircraft, this means that the Endurance-160 will carry either roughly eight JSF-equivalent aircraft or its current complement of medium-lift or heavy-lift helicopters. There will be no space left for troops, equipment, cargo, as well as the well-dock utilized for small landing craft.

An Alternative Floating Base for Launching “Second Strike” Aerial Missions?

Marvin Diaz had postulated that the JMMS serves as a potential alternative, offshore aerodrome in the event that the Republic of Singapore Air Force bases are destroyed in an enemy attack. In this scenario, surviving JSFs would be able to use the JMMS as one of the alternative basing options for subsequent retaliatory action.

However, it is difficult to imagine the JMMS playing such a role, given the modification issues earlier identified. It may be feasible for the JSFs, if acquired, to land on its flight deck for refueling and possibly rearming. They could even be embarked for a short duration.

Beyond that, the ship may not be able to offer much in the way of a retaliatory strike capacity. Moreover, in a hostile environment, the available JSFs would more likely be utilized for the air defense of the JMMS than to launch “second strike” missions against the enemy.

Even if such a “second strike” role is envisaged, the available complement would simply be too small to make a difference as an offensive strike package. The ship may possibly serve as an alternative offshore command and control center for the overall military operations, but would not be able to project offensive power on its own.

JMMS as a System of Systems… A Credible Offensive Weapon?

For the JMMS to serve as an aircraft carrier, it is not sufficient to only talk about the ship per se. Rather, it has to operate as the core of a task force, i.e. as a “system of systems.” Because the JMMS would carry minimal weaponry, and all of it short-ranged and optimized for point defense, area defense against distant threats has to be provided by escorts.

The available assets in service are the Singaporean Navy’s six Formidable-class stealth frigates. Each frigate is designed for anti-air, surface strike and anti-submarine operations. In the anti-air role, they have 32 vertical launch systems.

However, considering that the anti-air missiles are needed not just for area defense of the other ships, foremost the JMMS, but also its own self-defense, it is questionable whether 32 missiles per frigate would be sufficient in a scenario where the enemy can launch a determined, saturation attack using air, surface, sub-surface and shore-based forces.

Furthermore, modern long-range anti-ship cruise missiles can nowadays be acquired at relatively low cost, given the more diverse pool of potential suppliers. As such, they can be deployed in high quantities. To deal with such a scenario, Singapore may have to consider a new surface combat ship that is equipped with a larger payload to complement or even replace the frigates.

HA/DR as a More Conceivable Role

It is likely that the JMMS, while it possesses the potential to be modified for fixed-wing aircraft and therefore serve as an aircraft carrier, was conceived for peacetime humanitarian aid and disaster relief (HA/DR) missions.

The experience of HA/DR after Typhoon Haiyan wrought massive destruction in the Philippines in November 2013 highlights the capacity shortfalls of Southeast Asian navies in responding to major disasters. None of the regional navies had a HA/DR capability. The Japanese Ise-class “aircraft carrier” aptly demonstrated how a ship with a larger aviation capacity can be useful for conducting HA/DR.