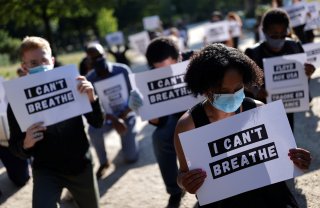 Last evening, as I strolled through my neighborhood in Friendship Heights, I stumbled onto several gangs that were intent on trashing businesses along Friendship Heights. I had enough sense to avoid continuing on to Wisconsin Avenue after I saw a number of figures skulking about near the J. Crew store but after I made a left to avoid them, I ran into some twenty youths, male and female, not a few decked out in ski masks and batons. Better to walk past them, I reckoned, than to try to flee. They ran after me laughing and shouting but it turned out that their real object was looting a store around the corner.

I don’t mean to make too much of this episode. But one interesting thing about that encounter that struck me immediately was that there were no police around. Zip. Nada. I was on my lonesome. I wasn’t Artur Sammler in Saul Bellow’s novel Mr. Sammler’s Planet courting trouble. Instead, I stumbled into it. Had the protesters, as the liberal argot insists on terming them, decided it was open season on me, I would have been a goner. You’re never as alone as in that kind of situation. Suddenly, the platitudes about the legitimate protestations of the protesters seem to take on a new, perhaps less benign, aspect.

This morning, after I walked to Wisconsin Avenue to inspect the damage, I heard that about one hundred police had later shown up but apparently did nothing to stop the looting. The wiser course, or so I’m incessantly told, is to let the looters loot. Criminals, in other words, gonna ride tonight. Really? It’s news to me that the looter gets to set the terms of the encounter with law enforcement. Nor is this all. I read in the Washington Post that the owner of Teaism near Dupont Circle, which got vandalized, is announcing that the trashing of her establishment was regrettable but no biggie. The rage of the protestors, we are told, supposedly legitimates violence. Sorry, but this strikes me as a kind of liberal Stockholm Syndrome.

These sentiments were fortified by a trip I made to downtown Washington today. The CVS next to my office building was trashed. 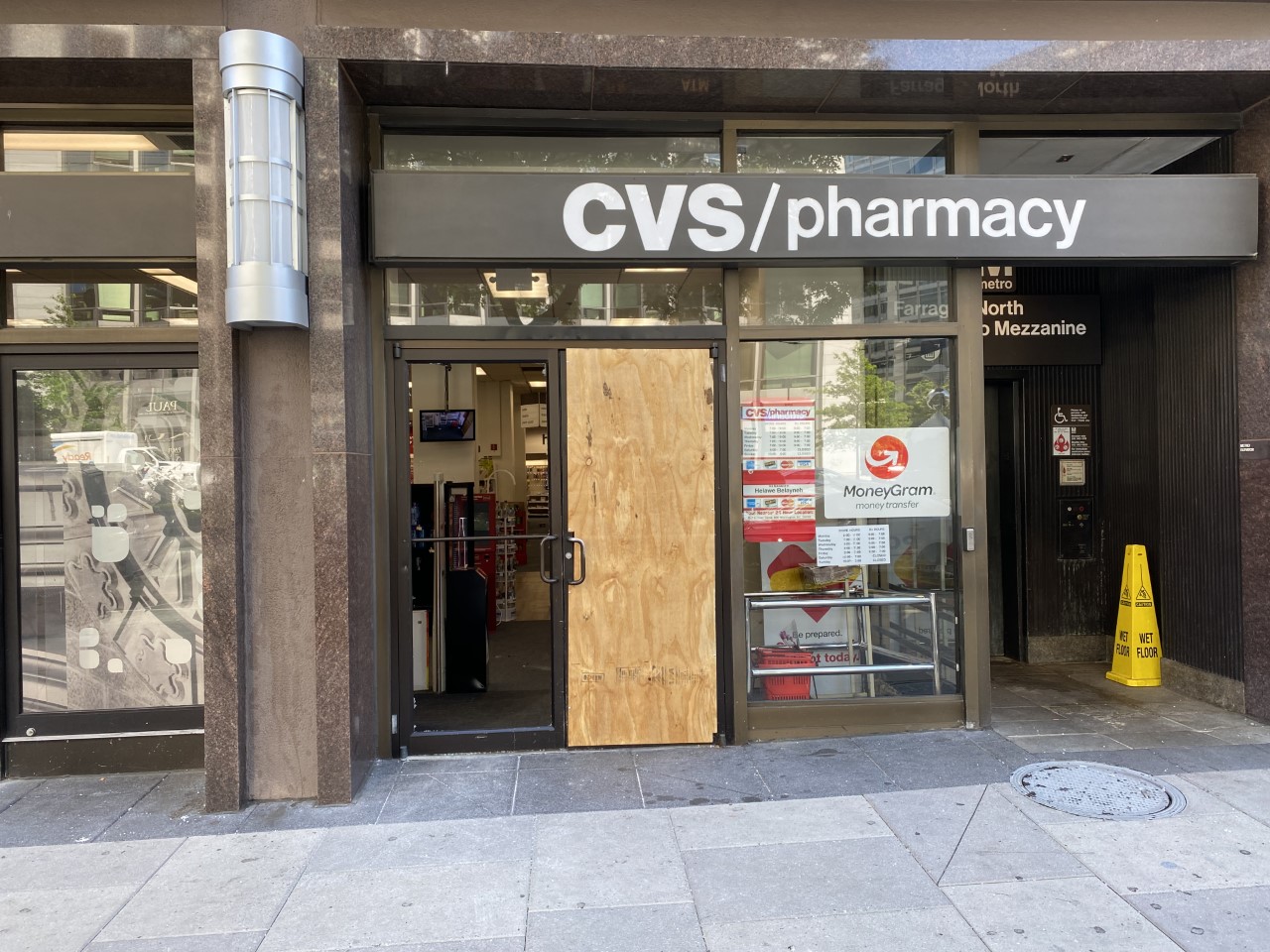 In the one that was attacked in Friendship Heights, the vandals made off with drugs and prescription forms. Did they do the same downtown? Then there was the mutilation of the statues of the various war heroes—oh, I’m sorry, old dead white men—in Farragut Square and Lafayette Park. They were festooned with all kinds of scatological language and denunciations of America, or AmeriKKKa, as one person spray-painted on a makeshift Secret Service compound in Lafayette Park. 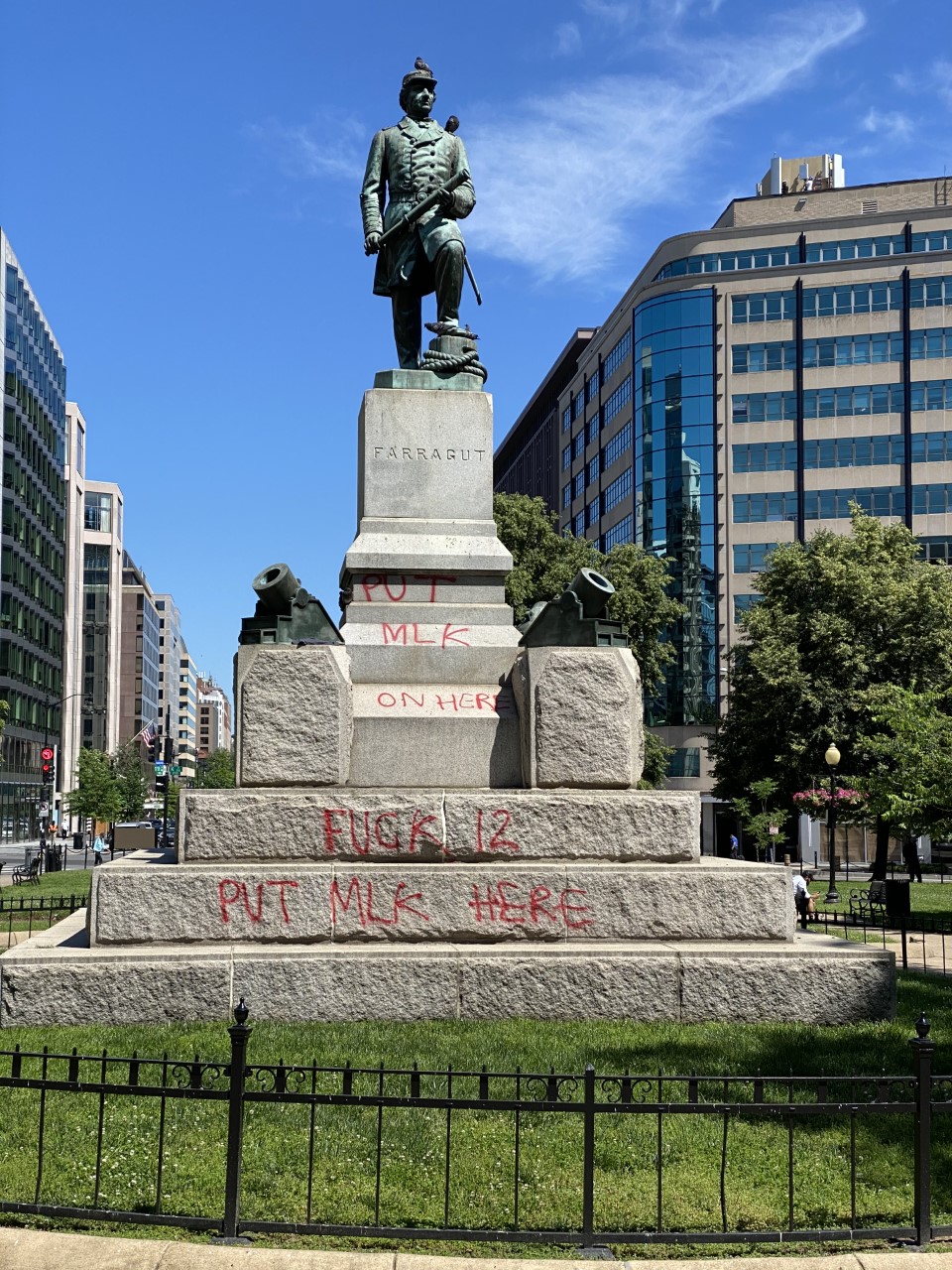 It was disconcerting, as well, to see the defacement of the statue of Tadeusz Kościuszko, the Polish freedom fighter who also joined George Washington’s Continental Army. As it happened, he directed in his will that the proceeds from his American estate be dedicated to purchasing the freedom of slaves, including his close friend Thomas Jefferson’s. Hard to see what contribution to liberty scribbling “Fuck 12” on his statue is supposed to make. 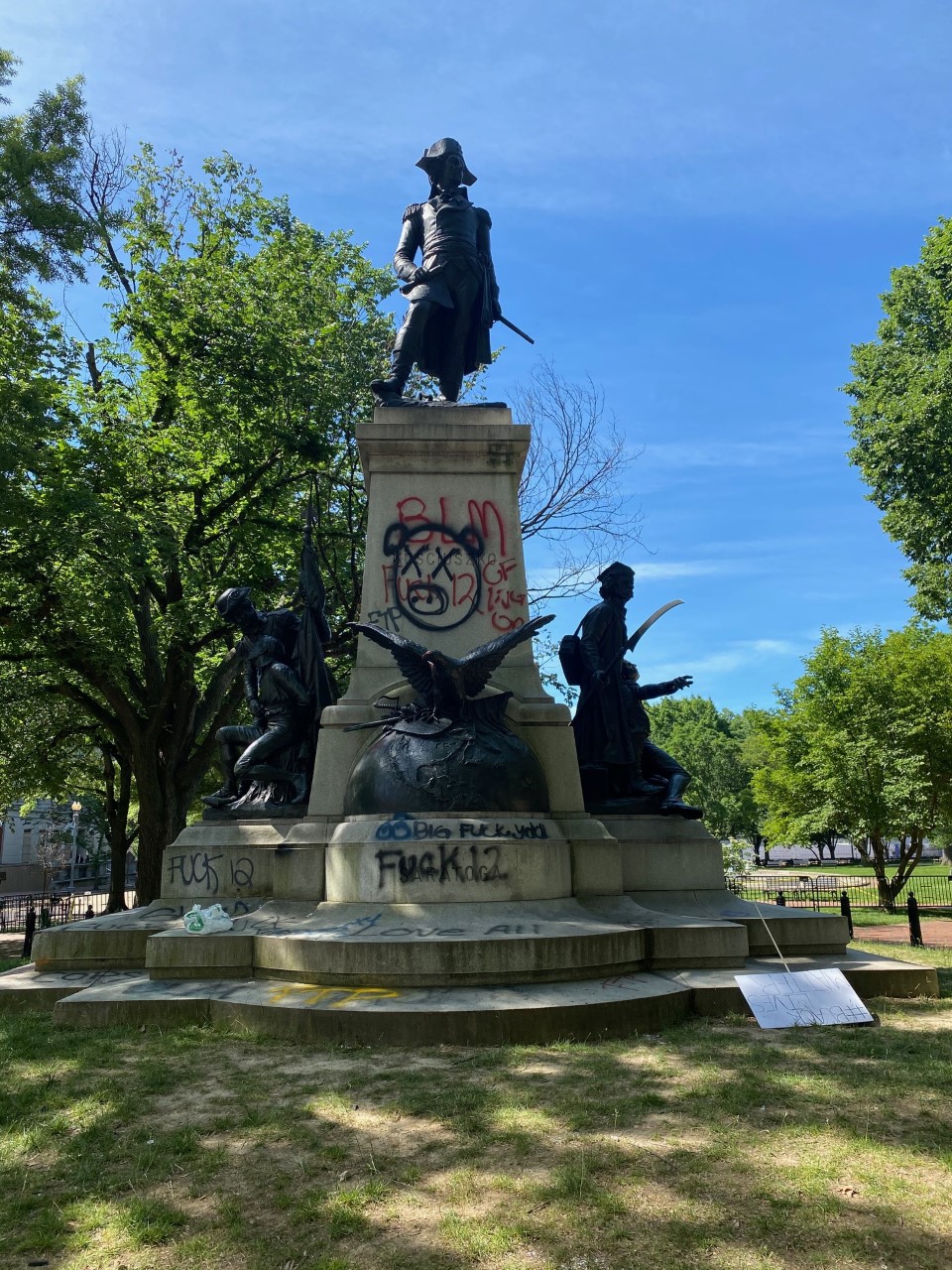 After being MIA, it seems that the Washington police and mayor Muriel Bowser are finally going to attempt to create some semblance of order tonight, starting with a 7 p.m. curfew. It’s about time. They won’t get much help from President Donald Trump, who has essentially washed his hands of both the coronavirus pandemic and the current strife afflicting America. The last thing Trump wants to do is have to take some responsibility for restoring order. Instead, he continues to vent at the governors and issue apocalyptic-sounding, but ultimately meaningless, tweets that simply stir up more animosity and acrimony. 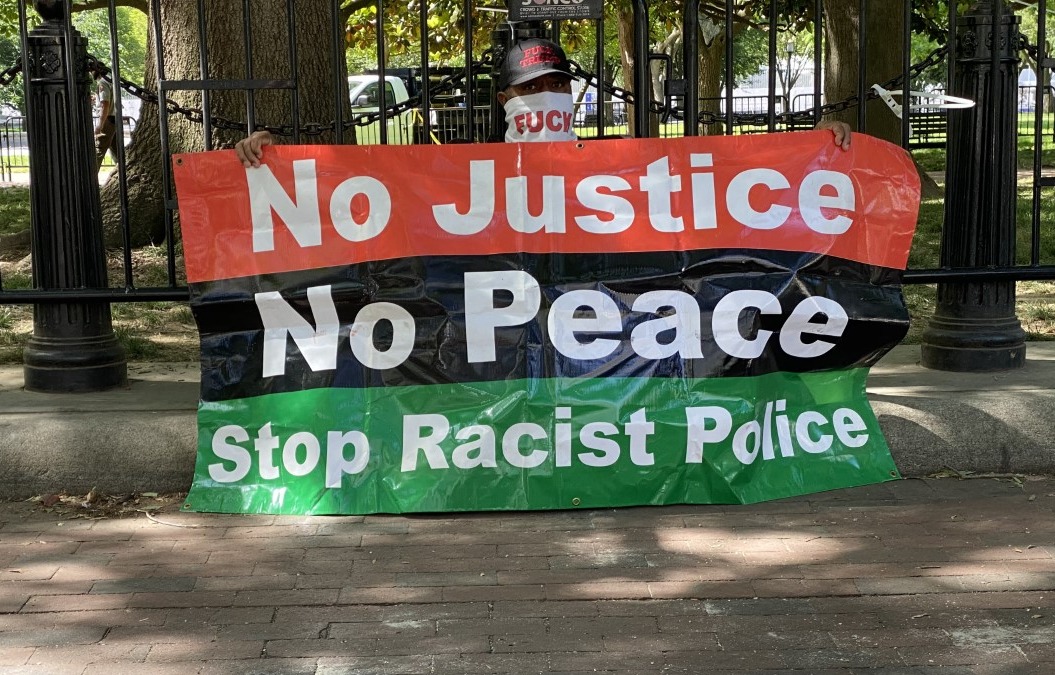 As I finished my walk around downtown, the acrid stench of the smoke from the fire at St. John’s Church lingering in the air, I passed the venerable Hay-Adams Hotel. Poor John Hay and Henry Adams. They experienced America when it was first emerging as a great world power at the turn of the nineteenth century. Their refined sensibilities would have been aghast at the profanities marring the portico of their Washington landmark, a small but vivid testament to the decay of a declining America.

Next to the Hay-Adams was a more recent but no less striking reminder of the respect that America once commanded, the “Ronald Reagan Presidential Foundation and Institute.” It was all boarded up. So much for the optimism that personified Reagan’s presidency. 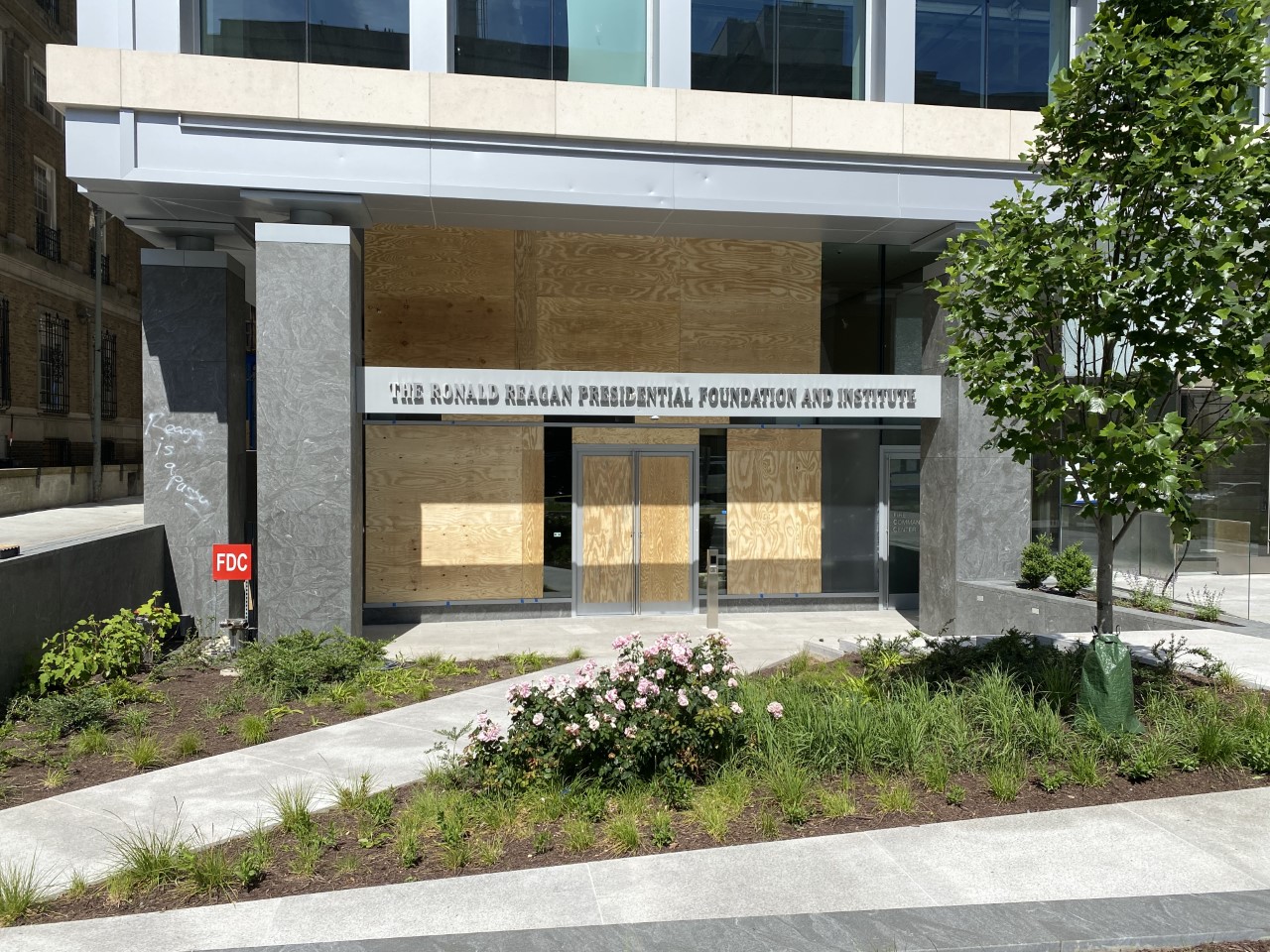 What the Gipper would have made of the decline and fall that America is experiencing is not hard to imagine. Goethe once remarked, “Amerika, du hast es besser--America, you have it better.” Whether that will remain the case has become an open question.