Are Americans Giving up Their Fourth Amendment Rights? 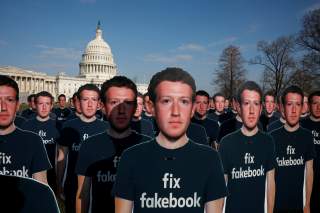 Zuckerberg should be asked by members of Congress and the media, whether Facebook, like several other corporations, provides the FBI, CIA, IRS and ICE with access to personal information about scores of millions of Americans—without a warrant. This is what Acxiom and ChoicePoint (now LexisNexis Risk Solutions) have been doing.

As of 2012, Acxiom maintained a database of over “500 million active consumers worldwide, with about 1,500 data points per person,” including “a majority of adults in the United States.” These personal dossiers are not limited to publicly available information, such as home addresses and phone numbers. Collection extends to such specific and private information as YouTube viewing habits, medical conditions, pet ownership, income, social media activity, financial vulnerabilities, and many other kinds of information.

The U.S. government in general, and law enforcement agencies in particular, have made substantial use of the services provided by these and other corporations since the 1990s. For instance, ChoicePoint, provided “services to 7,000 federal, state, and local law enforcement agencies” as of 2006. It had at least thirty-five contracts with government agencies, including the Department of Justice (through which it provides its databases to the FBI), as well as the DEA, the IRS, and the Bureau of Citizenship and Immigration Services.

The Fourth Amendment provides a major source of privacy for individuals against government surveillance. This amendment requires that no one will be “searched” unless the government has shown to a judge that it has “probable cause” for a search warrant to be issued.

If instead the government obtains personal information from a private corporation about many millions of Americans not charged with anything, not suspected of anything, the Fourth Amendment privacy protections are easily circumvented. The difference between the FBI keeping dossiers on scores of millions of innocent Americans, or using a database maintained by private corporations, is minimal—a click and a check.

The fact that the government is readily circumventing whatever limitations are in place on its surveillance of individuals by purchasing the information from privacy merchants raises the following questions: has the nation in effect given up on maintaining privacy protections? Or must the nation find new ways to limit the personal information corporations can amass, and above all, what they can share with the government?

Addressing this issue at a dialogue on privacy at Arena Stage, Jeffrey Rosen, president and CEO of the National Constitution Center, said that if the corporation “is to collect data for the specific purpose of giving it to the government, then it wouldn’t be a big stretch of the existing doctrine to say that they are effectively acting as if they are government agents and should be regulated accordingly.” Furthermore, he added, “the same judges who are willing to say that 24/7 surveillance is like a general warrant, might be willing to say that you can’t do through the back door what you are not allowed to do through the front door.” However, this is not what is happening here. The data are collected for business purposes but then shared with the government.

The public has a right to know if Facebook does the same, and if so, then what can be done about it?

Amitai Etzioni is a university professor at the George Washington University. His most recent book is Happiness Is the Wrong Metric: A Liberal Communitarian Response to Populism. ​For more see The Privacy Merchants: What is to be Done?, 14 U. Pa. J. Const. L. 929 (2012).