Fact: Terrorism Is a Part of the Pakistan Package 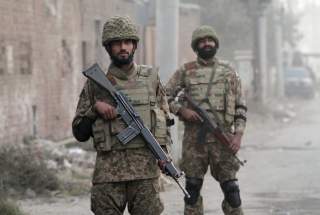 Ask a veteran foreign-policy hand in Washington to sum up the U.S.-Pakistan relationship in one word, and “frenemy” would likely be at the very top of the list. The term is a clever metaphor explaining the ups and downs of the two nations’ partnership. Depending on the circumstances or the issue at hand, Washington and Islamabad can either be partners working in concert or adversaries.

President Donald Trump has taken the “frenemy” term and ditched any reference of Pakistan being a friend to the American people. In his first tweet of the New Year, Trump stated that “[t]he United States has foolishly given Pakistan more than 33 billion dollars in aid over the last 15 years, and they have given us nothing but lies & deceit, thinking of our leaders as fools. They give safe haven to the terrorists we hunt in Afghanistan, with little help. No more!” A week later, Trump made good on his words by freezing as much as $1.2 billion in security assistance to Islamabad.

This isn’t the first time Trump has called out Pakistan for its behavior in a public forum, nor is it the first time a U.S. president has chosen to use purse-string threats to force a change in behavior.

Interactions between the two capitals have been strained for decades. In the 1990s, the relationship was spoiled by Pakistan’s testing of nuclear weapons, which prompted the Clinton administration and Congress to enact economic sanctions on the country. In the post–9/11 world, terrorism, militancy in South Asia, and Afghanistan have replaced nuclear proliferation as the wall separating both sides. Washington has long cited the Pakistan military’s unwillingness to indiscriminately combat terrorist organizations and militant groups using Pakistani soil as a base to attack U.S. and Afghan troops in neighboring Afghanistan. The Pakistanis, in turn, respond to those complaints with complains of their own, incessantly criticizing Washington’s failures in Afghanistan and expressing regret that the United States disrespects the sacrifices Pakistan has made in the war on terrorism. The anti-U.S. sentiment is not just a phenomenon within elite Pakistani circles either; it extends to the Pakistani population as well. According to the Pew Research Center, the U.S. favorability rating among the Pakistani people hasn’t cracked the 30 percent mark in thirteen years of public polling on the subject.

Both nations, in effect, view one another warily at best and hostile, ungrateful, or duplicitous at worst. A relationship such as this, even one that is transactional, cannot stand for long. The White House’s decision to suspend most security assistance to Islamabad pending a change in Pakistan’s counterterrorism policy is a reflection of just how much poison has seeped into the wound that is U.S.-Pakistan relations.

The problem causing the intergenerational headaches, however, is not so much about personalities, which person runs which ministries or departments, or how, where, or when Pakistani military conducts their operations. The trials and tribulations of the U.S.-Pakistani relationship are more elemental than that: the two hold completely different views of which terrorist groups should take priority and how Afghanistan should be governed.

In Afghanistan, U.S. policy has been consistent: support the Afghan government; train, advise, and assist the Afghan national-security forces so Kabul can eventually stand on its own against the Taliban; grind down Taliban insurgents in the field in order to convince the movement’s leadership that reconciliation with the Afghan government is the only option; and ensure that Afghanistan never again becomes a haven for transnational terrorism.

For the Pakistanis, Afghanistan isn’t necessarily about terrorism, but an indelible extension of its intense historical and geopolitical silvery with India. The Central Asian state is one more theater in the contest for power with an India the Pakistani military remains fixated on as the top threat to Pakistan’s national sovereignty and security. An Indian role in Afghanistan, however benign or insignificant, is frowned upon in Islamabad as yet another attempt by New Delhi to encircle it, contain Pakistan’s freedom of movement, and gain additional leverage in the region at its expense.

Within the Pakistani military establishment, it’s simply impossible and inconceivable for India to foment deep roots in a country that it views—rightly or wrongly—as within its sphere of influence. That’s something one could easily see immediately following the unveiling of President Trump’s Afghanistan strategy, in which he advocated for more Indian economic involvement. Politicians and analysts in Pakistan were none too pleased with the prospect of greater Indian influence along its western border, and they responded with trepidation at the very thought of a U.S. administration icing out Pakistan through a trilateral U.S.-India-Afghanistan alliance. During a September appearance at the Council on Foreign Relations in Washington, Pakistani prime minister Shahid Khaqan Abbasi stated point blank that his government deemed such an idea unacceptable. “We don’t accept or see any role politically or militarily for India in Afghanistan,” he said.

Armed groups that the United States designates as terrorist organizations or impediments to an Afghan peace process are utilized as assets in Pakistan to keep India’s regional influence at bay. The Haqqani Network, the Afghan Taliban, Lashkar e-Taiba, and the any number of extremist organizations that operate, fundraise and recruit on Pakistani soil are not so much agents of destruction for Pakistan as they are valuable cards in the deck. The groups are not to be shunned or combated, but exploited as tools in Pakistan’s national-security strategy against New Delhi—whether the contest is about Kashmir or Afghanistan. To give them up under U.S. pressure would be like a chess player giving up his queen. Indeed, the fact this hasn’t happened despite increasing anti-Pakistan feelings on Capitol Hill and the periodic suspension of hundreds of millions of dollars in U.S. counterterrorism assistance is a demonstration of just how valuable the Islamic extremist organizations are in Pakistan’s South Asia policy. The generals in Pakistan’s armed forces and Inter-Services Intelligence Directorate are more willing to sacrifice American defense articles, U.S. taxpayer money, and all of the goodies that come from a positive relationship with Uncle Sam, than cut off decades-long ties with extremists that serve as relatively effective proxies.

None of this, of course, is new. U.S. military officials have recognized the dynamic for years. During public testimony to the U.S. Senate in 2011, the then-Chairman of the Joint Chiefs Gen Mike Mullen concluded, “the Haqqani network acts as a veritable arm of Pakistan’s Inter-Services Intelligence agency.” Just two months ago, the commander of U.S. forces in Afghanistan talked about how little the Pakistani army has done against the Afghan Taliban on its soil. President Trump is simply continuing the deluge, albeit in more explosive language.

The fundamental question is not whether Pakistan is in bed with internationally designated terrorist organizations. After all, there is irrefutable proof from the Pentagon, the U.S. intelligence community, and the State Department that this is indeed the case.

The more pertinent question is when U.S. foreign-policy officials will wake up to a basic fact of life: can we really expect happier days ahead in the U.S.-Pakistan relationship when their national interests of both are so incongruent?

The Beltway foreign-policy establishment needs to snap itself out of the delusion that the Pakistanis will change their stripes. It will take a lot more than an aid cut or a public scolding to capture the Pakistani army’s attention. And even then, the generals running the show may see a higher value in groups like the Afghan Taliban and the Haqqani Network than in an annual billion-dollar check from Washington.