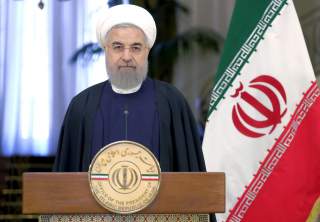 Leading into tomorrow’s midterm election, Trump spent weeks ginning up fear and hysteria over the fictional threat of a caravan of asylum-seekers. Trump excited—some might say incited—his political base by characterizing the caravan as an invasion and the refugees it carries as disease-infested gang members and terrorists of “unknown Middle Eastern” origin. But stories of hordes of barbarian invaders aren’t the only tall tales driving White House policy right now: the administration has also kicked up a storm about the terrible, and largely imaginary, threat posed by Iran.

As of today, the Trump administration has imposed a new set of harsh economic sanctions on Iran. This is in clear violation of the 2015 agreement that rolled back Iran’s nuclear program and put a lid on it for the foreseeable future. Trump unilaterally withdrew from the deal in May, but Iran has remained in full compliance for three years.

No matter, we’ve been told. An antagonistic approach toward Iran is necessary because Iran, as Secretary of State Mike Pompeo put it on Sunday, is a “terror regime” that threatens our allies, destabilizes the Middle East and abuses the rights of its own people. Sanctions, Pompeo promises, will change all that.

Actually, they won’t. Here are a few reasons why sanctions will fail.

Sanctions have a generally poor track record of actually changing the behavior of the target state in the direction desired by the sanctioning country. The White House hopes sanctions will impoverish Iran so much that the regime will be deprived of resources with which to carry out its policies.

But a recent study by the International Crisis Group looks specifically at the history of sanctions on Iran and finds that the “historical data shows little, if any, correlation between the resources at Iran’s command and its regional behavior.”

In fact, aggressively sanctioning Iran, surrounding them militarily as we have and threatening them with war only creates fear that Iran then acts upon. As the Crisis Group report explains, “the extent to which the Islamic Republic feels threatened or senses opportunity in its neighborhood largely defines its conduct. Measured against that standard, the Trump administration’s aggressive policy is likelier to spur Iran’s regional activism than to curb it.”

More to the point, sanctions are supposed to be about incentives. It’s hardly possible to successfully impose incentives against Iran when we’re not giving them a viable off-ramp. Short of total surrender, the White House hasn’t clarified how Iran can get these sanctions lifted.

Sanctions Will Largely Hurt the People, Not the Regime.

To put it bluntly, sanctions are about undermining the economy, and that means hurting innocent people. Everyday Iranians will lose their jobs, they’ll have less expendable income, inflation will make it harder to pay for basic needs.

U.S. sanctions target hundreds of Iranian banks and companies, making it very difficult to import food and medicine and other humanitarian supplies. Life-saving treatment for hemophilia and certain kinds of cancer are particularly difficult to get under sanctions. The lives of thousands of patients are at risk.

Yet, Secretary Pompeo seems to think this will endear the Iranian people to America’s good will. Describing the policy back in July, he talked of “support[ing] the long-ignored voice of the Iranian people” as a primary motive for imposing sanctions. If anything, the pain America imposes on ordinary Iranians will turn them against us, not against the regime.

To the extent that the regime is impacted by sanctions, it will be to undercut the moderate reformers in Iran who want to develop friendlier relations with the outside world, while simultaneously bolstering the hardliners—even directly: Iran’s Revolutionary Guard Corps controls most of the black-market smuggling, which gets more profitable under a comprehensive sanctions regime.

There Is No Strategy

One wonders in vain what it is that the Trump administration hopes to accomplish in its maximum-pressure campaign against Iran.

Clearly, the aim is not to discourage an Iranian nuclear weapons program. If that were the aim, then the administration would not have withdrawn from one of the strongest nonproliferation agreements in history.

And while Trump officials cite Iran’s regional behavior—its support for proxies, its meddling in Syria, etc.—as justification for a confrontational policy, hardly anyone believes Iran will reverse these policies in response.

The White House has repeatedly denied its policy is designed to change the regime in Tehran. That’s good, because regime change of that sort is not a legitimate function of U.S. foreign policy. In any case, history tells us that a policy of regime change would fail miserably and produce profoundly negative consequences.

And yet, Secretary of State Mike Pompeo apparently can’t stop himself from framing this policy in precisely those terms. As he put it last week with palpable hubris: “We want to restore democracy there. We think the Iranian people want that same thing.”

Despite this rhetoric, it is doubtful that the Trump administration actually wants the Iranian regime to collapse tomorrow. The unstated objective is to pressure the Iranians to invite the United States back to the negotiating table, which is where Iran can unilaterally submit to a “more for less” deal, one that obligates Tehran to commit to even greater encroachments on its sovereignty in exchange for less economic benefit and fewer concessions from Washington.

But Iran has already gone through a negotiating process with the United States, and it got burned. Tehran played by the rules and the United States broke its promises. They are not about to willingly pie themselves in the face again in response to new economic sanctions.

The truth is that the president has no real strategy here. The maximum-pressure policy is the product of Trump’s spite for his predecessor’s success, threat inflation on Iran generally and subordination to U.S. allies in the region.

John Glaser is director of foreign-policy studies at the Cato Institute.