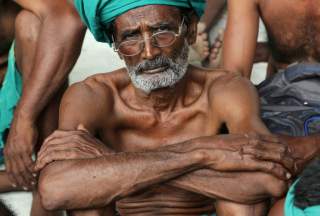 Record-high temperatures have hit India this month, but the banking sector has had an even bigger reason to sweat amid its growing bad-loan problem. Despite a bumper harvest, farmers have pressured lenders to wipe out debts, and state governments have started capitulating, putting pressure on an already stretched financial system.

Stressed loans account for 17 percent of all outstanding debts in India, the worst level among the world’s major economies.

The northern state of Uttar Pradesh was the first to surrender to pressure from farmers, agreeing to write off nearly 364 billion rupees ($5.6 billion) of loans to around twenty-two million small and marginal farmers. This was followed by the western state of Maharashtra, which announced waivers worth 300 billion rupees for its 3.5 million farmers.

Farmers in other major agricultural centers such as Gujarat, Haryana, Madhya Pradesh, Karnataka and Punjab have also piled on the pressure. In one such protest, five farmers in Madhya Pradesh were shot dead by police, with officials promising to write off defaulters in response to the demonstration.

Although India sets official floor prices for crops grown by its farmers, the recent oversupply has weighed on market prices. Nearly 85 percent of all land holdings in India are less than five acres in size, a fraction of the U.S. average of 440 acres, making it difficult for farmers to justify spending on productivity-enhancing equipment or benefit from economies of scale.

And with 118 million farmers and an estimated 144 million laborers, the farm lobby is a powerful political force in the world’s biggest democracy.

Yet surrendering to the demands of farmers could cost 3.1 trillion rupees, or nearly 3 percent of the gross domestic product of Asia’s third-biggest economy, according to IndiaSpend.

Analysts at Japanese investment bank Nomura suggest that two-thirds of the 9.5 trillion rupees of agricultural debt could be written off, with the bulk of such loans held with state-owned banks subject to political pressure.

While such write-offs would aid nearly 33 million indebted farmers, the central bank has voiced concerns over another Band-Aid solution.

“Waivers undermine an honest credit culture,” said Urjit Patel, governor of the Reserve Bank of India. “It leads to crowding out of private borrowers as high government borrowing tends to [raise the] cost of borrowing for others.”

Patel warned that further waivers ran the risk of “going down the slippery path and dissipating the important gains we have made in fiscal rectitude over the past two or three years.”

According to credit-rating agency Moody’s, the budget deficits of India’s state governments have risen from 2 percent of GDP in 2012 to 3 percent currently, with the recent loan waivers further stretching state finances.

Overall, general government debt has risen to around 70 percent of GDP, one of the highest such levels in Asia, according to the International Monetary Fund.

Stressed loans at Indian state-owned and private banks totaled 13.6 trillion rupees, or 17 percent of total loans outstanding at the end of March, which is equivalent to 242 percent and 160 percent of bank capital. Additionally, recognized impaired loans amounted to 11.3 trillion rupees and nonperforming assets at 7.7 trillion rupees, Credit Suisse Group estimates.

“If they persist, this could result in lesser supply down the line, more debt, waiver or policy responses in the form of higher support prices,” it said.

Meanwhile, expectations of further loan waivers have prompted some farmers to stop repayments, with the delinquency rate rising by up to 50 percent in recent months.

“Farmers are emptying their bank accounts so that we cannot deduct the payment due from them,” the head of a major bank told the Times of India newspaper.

“Loan waivers or relief from governments help clear our books as far as defaults are concerned but it impacts the overall payment culture badly in the long run,” another bank boss was quoted saying.

The waivers carry the risk of “significantly impairing asset quality” in the future, according to India Ratings and Research. And should banks turn off the credit switch, farmers could be forced into the arms of unregulated money lenders.

However, as noted by the Nikkei Asian Review, it is still an improvement on the 10.8 percent GDP deficit racked up by the Congress government in fiscal year 2009, when it announced that 600 billion rupees in farm loans would be written off and gave government workers a large pay raise.

Sluggish rates of investment and job growth have been worsened by the failure of the banks to pass on official interest rate cuts, with the slowdown attributed to “excessive debt” of a number of industrial sectors, the Reserve Bank of India has warned.

The central bank has reportedly identified twelve major defaulters who account for a quarter of bad loans on the books of local banks, which will be tackled through the Modi administration’s new insolvency laws. However, with low business confidence, the banks could be forced to take bigger haircuts on these debts, analysts warn.

The government has attempted to curb the influence of state-owned banks, which account for more than 70 percent of total lending. These efforts have included governance reforms and mergers, while still maintaining majority ownership.

Yet with bank-credit growth hitting its lowest level in nearly two decades, some economists have warned of the risk of “Japan-style” stagnation if the problem isn’t properly addressed.

Already, GDP growth has slipped to 7.1 percent in fiscal 2017, significantly lower than the 8 percent achieved the previous fiscal year. Private investment remained weak “on account of stressed corporate balance sheets and banks’ risk aversion to lending,” according to ANZ Research.

With his demonetization and other reforms such as the new consumption tax, Indian prime minister Narendra Modi has shown his willingness to take on vested interests. Tackling India’s bad-loan crisis and its millions of angry farmers could prove his toughest challenge yet.

Image: A farmer looks on as he attends a protest demanding a drought-relief package from the federal government, in Chennai, India, June 9, 2017. REUTERS/P. Ravikumar​