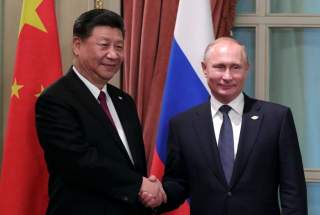 Even as Democrats bash the Republicans for being too soft on the Kremlin, the Republicans are inclined to point out that the Obama administration was far too accommodating of China. After all, President Barack Obama prioritized the climate change issue that necessitated a high degree of cooperation with Beijing. Yet in today’s toxic partisan warfare, a winning electoral strategy will be to declare the political opponent as insufficiently xenophobic and thus lacking “true” patriotism.

These days, many people in the Washington foreign policy establishment seem to agree that most of the world’s problems can be put down to either Beijing’s purported insistence on building a new, nefarious world order comprising “all under heaven,” or Moscow’s wily attempts to spread its tentacles everywhere from Madagascar to Libya and possibly even America. Thus, Russian “stooges” and Chinese “useful idiots” are lingering around every corner, so it seems. Even those arguing against a conflict with Iran may find the great-power competition concept useful to the extent that yet another war in the Middle East could dangerously distract the United States from the “main event” in either East Asia or in Eastern Europe.

The RAND Corporation tried to settle the acrimonious debate over whether Moscow or Beijing represents the greater threat by inventing the clever formulation that “Russia is a rogue, not a peer. China is a peer, not a rogue.” This concise statement has some value, no doubt, but critics will argue that Russia’s new ICBM Sarmat looks a lot like the BMD-evading bludgeon of a full-up “peer” and China’s activities in both Xinjiang and also the South China Sea tend toward rather rogue behavior. Indeed, many defense analysts are inclined to remain agnostic and focus efforts against the unifying (if anodyne) theme of “the axis of authoritarianism.” The most stressing challenge, it is said, to U.S. national security is if Russia and China actively combine efforts to thwart and even vanquish American global leadership.

True, prospects for a genuine, formal China-Russia alliance still seem quite remote, but occasionally it is useful to take stock of the concrete manifestations of this most crucial dyadic relationship in the strategic realm, especially now that the partnership has continued to blossom uninterrupted for more than three decades now. Such a comprehensive appraisal is made from a naval perspective in a mid-2019 edition of the Chinese scholarly journal Russia, Eastern Europe and Central Asia Studies [俄罗斯, 东欧, 中亚研究]. The authors, researchers at China’s Naval Research Center [海军研究院], published a comprehensive review under the title “A Historical Review and Assessment of 70 Years of China-Russia Naval Cooperation [中俄海军七十年合作的历史回顾与思考].”

The first alteration in the global balance of power enabled by Russia-China cooperation took place during the 1950s, of course. In that period, the PRC went from being a military “basket case,” with no defense industry to speak of, to possessing a reasonably modern force within a span of just a decade. That super-energized process was inspired by the hard school of war against a vastly better-armed opponent in the bloody Korean conflict, as is well known. But the massive progress in Chinese military capabilities also could not have taken place without enormous Soviet assistance. With respect to naval-related arms transfers, Moscow had already given ten torpedo boats and eighty-three aircraft by the beginning of 1953, according to the scholarly journal. The process accelerated during 1953–55 with a total of eight-one additional vessels transferred (amounting to 27,234 tons) and 148 aircraft. Among these ships were four destroyers, four frigates, and thirteen submarines.

Additionally, the Russians provided the Chinese with more than five hundred torpedoes and over fifteen hundred sea mines, as well as coastal artillery pieces, radar and communications equipment. A third batch of naval transfers was comprised of sixty-three vessels and seventy-eight aircraft. Added to these very substantial allocations, five Chinese shipyards apparently produced another 116 naval vessels, relying heavily on advisors, designs and technology purchased from the USSR, during the period up until 1957. Finally, several transfers agreed to in early 1959 “caused China’s Navy to enter into the missile age.” Notably, these transfers included the R-11, a primitive submarine-launched ballistic missile (SLBM), and also the P-15, one of the earliest anti-ship cruise missiles (ASCM). Yes, these are the earliest progenitors of today’s JL-3 and YJ-12 missiles that now present quite credible threats.

In keeping with the presently jovial mood surrounding current Russia-China relations, very little is said in this Chinese article regarding the Sino-Soviet conflict that brought the two Eurasian giants to the brink of war in the late 1960s. The authors imply that the break was really between the two respective Communist parties, rather than between the two navies, but it is noted that the Kremlin’s stated objective to form a “joint fleet” was viewed in China as an encroachment on Chinese sovereignty. Nevertheless, this substantial military cooperation between Moscow and Beijing during the 1950s is evaluated in this Chinese appraisal to have had “major historical impact [重要历史作用].” These authors contend that it “effectively decreased the threat of American imperialism [有效抵制美帝国主义的军事威胁]. They additionally conclude regarding this period: “The achievements of building up the Chinese Navy cannot be separated from the assistance of Soviet experts [中国海军建设的成绩是与苏联专家的帮助分不开的].”

For a long time, “Soviet revisionists” were not given such favorable treatment by Chinese scholars, but now evidently the “east wind” is blowing once more. If the USSR very substantially helped boost PRC military prospects during the 1950s, this paper by two Chinese naval analysts argues cogently that a similarly ambitious and fateful program of Russia-China military cooperation has had an analogous effect, starting in 1991. When seen in aggregate, the numbers are indeed quite impressive. Russia has sold China, according to this Chinese accounting, more than five hundred military aircraft, including Su-27, Su-30, Su-35, and Il-76 variants. Almost as significant, Russia provided China with more than two hundred Mi-171 helicopters. Just as these pivotal purchases launched China’s air and land forces into a new era, so the Chinese acquisition of four Sovremeny destroyers, along with twelve Kilo-class submarines helped to provide the PLA Navy with the technological wherewithal to enter the twenty-first century on a robust footing. That shortlist here, moreover, does not even catalog other vital systems transferred, such as advanced air defense systems, which have formed a bedrock of Chinese purchases from Russia.

Citing a Russian source, these Chinese authors claim that China spent $13 billion on Russian weapons between 2000–05. That amounts to a decently hefty sum of cash, especially by rather penurious post-Soviet standards. In fact, this raft of deals was not only intended to rescue the PLA from obsolescence but simultaneously aimed to “resolve . . . the survival and development problems [解决 . . . 生存和发展问题]”of the post-Soviet Russian military-industrial complex too. Just as important as these technical transfers, however, have been the human capital investments in cooperation. Here, this study points out that two thousand intermediate and high-level Chinese officers have already graduated from Russian military academies. The upper ranks of the PLA Navy, in particular, are said to be full of these graduates, as reported in this study. Perhaps most critically for the future of the Chinese armed forces, cooperation with Russia has entailed “in particular, promoting the development of domestic weapons development levels and concepts. [尤其带动了国内武器研制水平和理念的提升].” Take, for example, the YJ-18 ASCM, which seems to be superior to any U.S. variants, is a derivative of the Russian SSN-27 missile and is now becoming pervasive throughout the Chinese fleet, with both surface and sub-launched variants.

For all the major results on the regional balance of power wrought by these two major periods of Russian-Chinese security collaboration, however, there are very real reasons to doubt that such a partnership will truly alter global politics. After all, the Chinese analysis points out that arms sales from Russia to China have declined substantially from the peak in 2005. Joint military exercises, moreover, are now quite regular, but they actually do not seem to exhibit a bellicose trend toward larger and larger demonstrations of military might. These tendencies may reflect new confidence in Beijing regarding its own abilities to produce advanced weapons, of course, but also might reflect a certain degree of restraint—a realization that too close a Russia-China military alignment could provide ample fuel for a new Cold War that might be in the offing.

Still, American defense analysts must evaluate the possible results of a significantly closer Russia-China security relationship, whether it is formalized into an actual “alliance” or not. China and Russia currently have numerous joint development projects underway, including both a large commercial airliner, as well as a heavy-lift helicopter. In the future, will cooperative endeavors encompass frigates and VSTOL fighters, or nuclear submarines and stealth bombers, or even aircraft carriers? Will Moscow and Beijing begin to launch joint exercises of a large scale that have major strategic implications in highly sensitive areas? Are third countries, such as Iran, set for “junior associate” status in the so-called “quasi-alliance? And will China and Russia strive to coordinate strategic initiatives to bring about common favorable strategic circumstances in the coming decades?