Fear of Trump Has United the Beltway 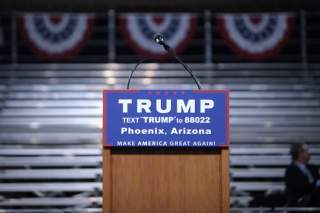 Donald Trump’s terrible June, the thinness of his campaign organization and his nearly nonexistent fundraising are important, and there is a fair chance the presumptive GOP nominee won’t recover sufficiently to run even a competitive race in the fall. There is also a fair chance that a bad month will be followed by a good one, a fact that underscores the potential strengths of Trump’s coalition against an unloved figure of the Democratic establishment. If Trump recovers and does better than polls now indicate, it won’t be so much due to Trump as to the latent political strength of the forces he represents.

One illustration of this is the strange bedfellow alignment of Trump’s Beltway enemies. Last week the Washington Post published two notably shrill attacks on Trump, by Robert Kagan and Fareed Zakaria, both of whom rank among the nation’s top intellectual representatives of, respectively, neoconservatism and a more cosmopolitan neoliberalism.

Zakaria’s main line of attack was trying to shame Republicans away from supporting Trump because of the billionaire’s illiberal rhetoric about Muslims. Trump, noted Zakaria, had “warned” American Muslims to cooperate with authorities. He “stoke[s] fears about immigrants”—while not mentioning that Omar Mateen “wasn’t actually an immigrant but a Queens-born American.” (Others would conclude from Orlando and other terror strikes carried out by second-generation Muslims that America’s long success at assimilating immigrants was broken in today’s globalist world, especially among Muslims, and that Trump’s calls to reassess immigration policy are hardly unreasonable given this new reality).

Zakaria concludes with his list of shame: major Republican politicians and office holders who have not formally rejected Trump. He crowns it with Senator John McCain, who “has lived a life of service, with acts of courage that are beyond my comprehension.” McCain can “preserve his honor” by joining the #NeverTrump movement.

Could there be something odd about Zakaria’s pedestal for McCain? Whatever his Vietnam record, McCain in this century is known for unmitigated hawkishness, for “Bomb, Bomb Iran,” for reckless declarations of solidarity with former Soviet Georgia, for “rogue state rollback”—positions that are probably a recipe immersing America in perpetual war. Zakaria, too, was an advocate of the Iraq War, but has since regretted the position he once took. What, then, is one to make of his effort to elevate McCain for contrast with Trump, whose stated positions on the use of American military force are far more restrained? It seems to be a kind of re-endorsement of militarized neoconservative positions.

The same day the Post published Zakaria, it ran an anti-Trump screed by Robert Kagan, a leading theoretical proponent of American global hegemony and the husband of Victoria Nuland, who oversaw the lavishly funded American and NGO effort to destabilize Ukraine, provoking a crisis with Russia which may yet end in full-scale war. Kagan warned that a President Trump would run roughshod over both Republicans and Democrats, and that his election would threaten the constitution. Trump, claimed Kagan, would be a “fascist president.”

In a reasonable world, it would seem curious to label someone a fascist who seems uninterested in putting together even a competent national campaign organization, much less a disciplined mass party. Probably Kagan is using “fascist” in the manner Orwell described, as a word having “no meaning except in so far as it signifies ‘something not desirable.’”

Insofar as Kagan’s own policy preferences are concerned, Trump is surely not desirable: a President Trump would risk not global war over Ukraine, nor attempt to establish American “benevolent global hegemony.” What is telling is to see Fareed Zakaria join with him—the two symbols of a kind of united globalist intellectual establishment that can tolerate no legitimate dissent—in the Trump demonization project.

Trump’s surprise victory in Republican primaries indicates he has tapped into a deep, long-suppressed political current, acknowledging that America’s relatively open immigration policies don’t really benefit the American people, that Washington’s unrelenting pursuit of global “free-trade” deals have contributed to the decimation of America’s industry, that the Iraq War was a disaster which shouldn’t be repeated. Trump deserves much credit for bringing these issues to fore. At the same time he should be regretted for being unable, for reasons of experience or temperament, to mount a national campaign to effectively communicate them to the country. He has some time ahead to correct this, and if he does, the race will be interesting.

Right now, his inept national campaign has produced a Beltway consensus unlike anything Washington has seen since the old GOP establishment rejected Barry Goldwater’s nomination and sat on their hands for LBJ’s landslide. That led to a joke that went something like: “I was told if I voted for Goldwater, we’d be involved in an endless war in Asia and have violent domestic strife.” What will the next version of the joke will be?

It’s also worth recalling that Goldwater partially transformed the Republican Party. That precedent is at the root of the establishment’s fear of Donald Trump.