Feelings About Immigration Are Not Facts 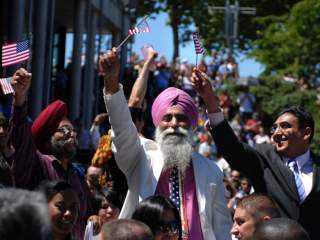 Donald Trump seems to fear all immigrants. President Obama has no fear. The former sees all as suspicious one way or another, especially the Muslim kind. The latter seems to prefer them to the native born. The respective motivations are clear and clearly political, cynically so in some instances. Meanwhile, the public seems to run almost exclusively on its emotions. If partisan politics is unsurprising among politicians and emotionalism is unsurprising among the public, especially with a matter that cuts close to a sense of national culture and security, neither approach presents a good basis for policy making. That requires an awareness of feasibility, an assessment of fact and reason. Fortunately, the Census Bureau offers clear data to help with the effort, as do its equivalents abroad. Their figures at once bring good news and caution. They also point to Australian and Canadian policies as model ways to secure welcome trends while guarding against less helpful developments.

The most encouraging aspect of these data is the clear rise in skill levels they chart. Before 1970, less than one-quarter of immigrants to the United States had a bachelor's degree and barely 12 percent had higher degrees. In the last decade or so, these proportions have risen respectively to almost 33 percent and just over 16 percent. They now rival proportions among the native population, where some 32 percent have bachelor’s degrees and 12.6 percent have higher degrees. World Bank, UNESCO and Eurostat statistics indicate that the same thing is happening elsewhere. Canada, Australia, the United Kingdom and France, for instance, have all seen a jump of between 10 to 20 percentage points in the proportion of college-educated migrants during this time. To be sure, university degrees are far from the only measure of skill. But they are indicative, and welcome, since much scholarly research shows that better educated populations are generally more peaceful, productive, innovative, and prosperous.

If these trends were to push the proportions of college-educated immigrants significantly above those of the native populations in each host country, the flows would offer an unequivocal economic lift in place of the unsupportable burdens so many fear. And because economic success naturally facilitates a social, if not a cultural integration, such trends also promise to reduce tensions among groups in society. But, as is so often the case with statistics, the detail behind these encouraging overall figures interjects a less optimistic element into the equation.

It warns, rather forcefully in fact, that, if unaddressed, the trend toward higher levels of education may not last. It seems that this welcome development may simply reflect an increase in the proportion of Asian immigrants during this time. It is not that Asians are better educated than others. Rather its is that flows from Asia are newer, and, as historical trends make clear, early immigrants from a particular region typically have more confidence, more money, superior language skills and better educations than the general population from which they emerge. Once these pioneers establish something of an ethnic or national community in the host country, history also shows, less well educated migrants follow. The implicit forecast then is clear. Trends toward higher education levels will reverse as these Asian pioneers establish a successful ethnic community in each host country—something they are doing.

Certainly U.S. data on the education levels among different immigrant groups support this contention. According to the Census Bureau, this newest immigrant group, from Asia, has the highest average levels of educational attainment. Over half these migrants in 2012, the most recent year for which complete data exists, could boast bachelor’s degrees and fully 24.5 percent carried higher degrees. That is well above proportions in the native U.S. population and certainly higher than proportions in Asia as a whole. The lowest education levels exist among the group with the best-established immigration traditions, Latin Americans, where only 12.9 percent have bachelor’s degrees and only 4.2 percent have post-graduate degrees. Those from Mexico, which has the largest and best-established community even among Latin Americans, have still fewer educated in the mix, only 6 percent with bachelor’s degrees and only 1.6 percent with post-graduate degrees.

Despite the warning implicit in these comparisons, the United States could sustain the higher skill mix if it were to shift its immigration policies toward those of Australia and Canada. These nations, unlike the United States and many other nations, put considerations of skill first when granting resident status. This country seems to focus mostly on the immigrant’s connections to people already here and so naturally favors those coming from areas that have provided the most immigrants to date. Though Canada and Australia allow for compassionate family reunions, they emphasize skill through what might be called a point system. Applicants get points for functionality in English in Australia, and English or French in Canada. They get additional points for higher levels of education and other occupational skills that the country needs. They also get points for, among other things, the ability to transfer assets. Once the applicant reaches a set threshold of points, he or she gains admittance and a work permit.

Available figures certainly indicate that this approach has met with success. Some 38 to 67 percent of immigrants to Canada and Australia have at least some college, depending on the particular data source used. In contrast, the United States, the United Kingdom and France, all of which use connections instead of a point system, show immigrant flows with much lower proportions of college education, averaging between 20 and 35 percent for these three countries as a group.

To be sure, such economically helpful policies would still leave many immigration questions unanswered. Cultural coherence, after all, also depends on common customs, ways of thinking and manners of behaving. Large flows of even the best-educated, job-ready, law-abiding newcomers can undermine these. Some societies can cope better than others. In this regard, the United States is fortunate in having the immigrant traditions it has. Each nation's immigration policy needs to take account of its traditions and all these admittedly unquantifiable elements as well as the economics and statistics. Still, an insight into the economics of the matter can help ease the decision-making burden, leaving those responsible with the room to focus on the less tractable aspects of the matter.

Milton Ezrati, a contributing editor to the National Interest, senior economist for Lord, Abbett & Co., and an affiliate of the Center for the Study of Human Capital at the University at Buffalo (SUNY). His most recent book, Thirty Tomorrows, describing the challenge of aging demographics and how the world can cope, was recently released by Thomas Dunne Books of Saint Martin’s Press.