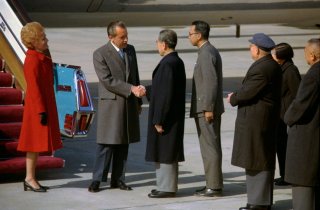 Fifty years ago this week, U.S. president Richard Nixon paid an official visit to China, thus ending an official diplomatic boycott that had lasted since the Communists took power in 1949.

The visit, which took place from February 21-28, 1972, was a diplomatic spectacle as few others have been. Few events in modern diplomatic history have astounded the world as much as Nixon’s visit to China. Only Egyptian president Anwar Sadat’s official visit to Israel in November 1977, which ended the diplomatic boycott of Israel that existed since its foundation in 1948, can be compared to it. Nixon’s visit was the culmination of a major diplomatic breakthrough and the beginning of an emerging relationship between the two former foes.

Since the Chinese Communists came to power in 1949, the United States had no official diplomatic contacts with the government in Beijing as it recognized the nationalist government in Taipei, Taiwan, as the legitimate Chinese government.

The enmity between the United States and Communist China reached a peak during the Korean War (1950-1953), when the two countries fought each other.

But increasing hostility between the two Communist powers, the Soviet Union and China, which then led to armed clashes between the two in the winter of 1969, offered an opportunity for the United States to attempt a rapprochement with its long-time rival.

To be sure, before he was even elected president, Nixon had written a Foreign Affairs article in 1967 arguing that Communist China was too important to be relegated on the sidelines of the international system.

After becoming president, Nixon and Kissinger set out to explore the possibility of a diplomatic thaw with Communist China. Following some unsuccessful attempts, the Pakistani government, which maintained close links with both countries, facilitated negotiations, finally leading to Kissinger’s secret mission to China and subsequently to Nixon’s official visit.

An official presidential visit of such a long duration would be difficult to countenance nowadays, particularly with a country with which the United States has no diplomatic relations. Nixon would describe his visit as “the week that changed the world,” which reflected the contemporary view that the visit was a singular turning point in the history of international relations. The same can be said fifty years later.

This statement, in principle, was something both Communist China and Taiwan could agree on. After all, both believed that there was but one China; they just differed on which regime should rule over it.

Nixon’s visit changed the nature of the Cold War. Pursuing a policy of détente towards the Soviet Union, the United States was able to manoeuver between the two Communist powers. Détente created a situation, as Kissinger put it, in which the Soviet Union and Communist China were more distanced from each other than either was from the United States.

Arguably, the bipolar international system that existed until then turned into a tripolar one.

To be sure, Communist China under Chairman Mao Zedong was a totalitarian state. Mao and his regime were responsible for the deaths of millions of Chinese citizens and the persecution, humiliation, and torture of a large section of the population. The cult of personality in China reached Stalinist levels. The diplomatic opening to Communist China and the long-term effects were certainly not prompted by any ideological affinity.

Indeed, Nixon and Kissinger had already made clear that the principal motivating factor in their foreign policy was serving the U.S. national interest. There was a strong pragmatic streak behind their policy. Ideological reasoning was not completely absent from their decisionmaking process, but it was secondary. As Kissinger himself would argue many years subsequently, Nixon’s rhetoric was more idealistic than his actions; his objectives were defined in Wilsonian terms, while the tactics he employed were more pragmatic.

With the benefit of hindsight, many regarded Nixon’s opening to China as his most astounding foreign policy success. It was not merely an ephemeral, tactical achievement, but rather a deeply influential, long-lasting crowning of a presidency marred by the Watergate scandal, which brought about Nixon’s downfall in August 1974. Although Watergate tarnished his reputation, Nixon managed to make a remarkable comeback into public acclaim as he became an elder statesman, whose opinions on foreign affairs leaders and policymakers frequently sought.