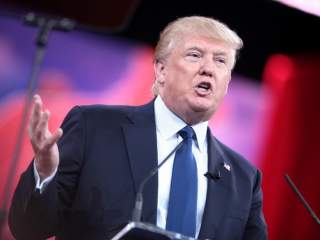 The GOP debate on Thursday night in South Carolina revealed with brutal clarity that the GOP primary is essentially down to a mano-a-mano contest between Donald Trump and Ted Cruz. The extent to which Trump has reshaped the race is extraordinary. He remains the fulcrum around which the entire GOP primary revolves. Trump has dispensed with the miasma of political correctness that hangs over the party on everything from free trade to intervention abroad. He doesn’t simply differ with the GOP’s traditional stands. He assails them with almost lascivious pleasure. There’s little running room on the issues with Trump around. Absent Trump the debate would have been a much more genteel affair.

Small wonder that most of the other candidates looked pedestrian by comparison. Jeb Bush came across as professorial and almost whiny. Chris Christie was avuncular and landed some heavy blows against Marco Rubio, but he doesn’t convey the polish of Cruz. Nor does he wield the stiletto as effectively as him. Marco Rubio is poised but had essentially nothing to offer apart from vituperation of Christie as some kind of liberal. Ben Carson sounded reasonable and thoughtful, but had nothing of substance to deliver.

Which is why Cruz remains the most potent foe of Trump. The former Princeton University undergraduate and Harvard law school graduate is doing a brilliant job of pretending to be a populist. He even managed to portray his loan from Goldman Sachs as the product of not having the kinds of millions at the disposal of Hillary Clinton. He is brazen, astute and agile. It’s also clear that Cruz has the ability to improvise, which helped him last night.

Indeed, ever since he began drafting behind Trump by refusing to criticize him, it’s been clear that Cruz is the best-positioned candidate to wrest the presidential nomination from him. Cruz largely shares Trump’s positions on foreign policy and immigration. He can also depict himself as someone who’s already been to Washington—and remained uncorrupted.

Whether Trump falters or not is of course an open question. He was vigorous and direct. One of Trump’s most effective tools was to simply enunciate, “No,” in response to several questions from the moderators. You know where the man stands. But it also became clear that Trump enunciates slogans but is either unwilling or unable to offer any details to back them up. Whether this matters is also unclear, at least in the context of the Republican primary where Trump continues to poll very strongly. But in a general election, just referring to big, serious problems won’t cut it. Last night, Cruz had the better of Trump during their direct confrontations. He zeroed in, for example, on Trump’s rather squishy cultural values: “Everyone understands that the values in New York City are socially liberal, are pro-abortion, are pro-gay-marriage, focused around money and the media." The implication was clear: just how conservative is Trump really?

If it was the end of the bromance between the two, it came to a sharp end. Cruz was clearly well-prepared for the issue of whether his birth renders him eligible to run for president. Trump was not. Instead, Trump looked weak when he confessed that he was targeting Cruz because of his rising poll numbers. Trump would have been better off saying that he had studied the issue more closely and concluded that it was indeed a serious one.

For the Republican establishment, the prospect of either Trump or Cruz as president poses a kind of Götterdämmerung scenario.  They’re searching for a Siegfried to slay the Trump dragon, but the last person they want is Cruz. For Cruz shares Trump’s predilection for targeting the GOP’s verities. He leans toward the realist side on foreign policy, though he has tried to burnish his hawkish bona fides by promising to carpet bomb the Islamic State. He’s taken a very hard line indeed on immigration. And his anti-government credentials are unimpeachable.

Right now, there is a lot of hand-wringing in Washington GOP circles. Writing in the New York Times, for example, Peter Wehner announced, “I will not vote for Donald Trump if he wins the Republican nomination.” But what if Bernie Sanders is the nominee of the Democratic Party, a prospect that no longer looks quite as outlandish as it once did now that Hillary Clinton’s poll numbers are faltering? Then a number of Republicans who are threatening to sit on the sidelines would doubtless reconcile themselves to Trump or Cruz. Indeed, if the nominee is Clinton, many Republicans will also surely come to detect new virtues in Trump. And don’t assume that Trump can’t win. The big question marks are the state of the American economy and whether another significant terrorist attack takes place in America.

For now, however, it seems clear that Cruz is playing his cards well. Media elites continue to target him: the New York Daily News has a cover stating, “Drop Dead, Ted.” But his campaign has never looked more alive. The fight between him and Trump may well go all the way to the convention in Cleveland. But one thing seems clear: the GOP candidate will be a populist, anti-establishment one.