In a Fight Over Taiwan, China Is No ‘Near Peer’ Adversary 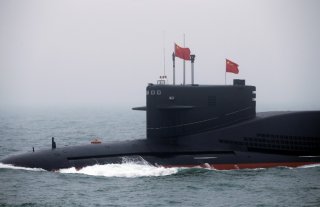 In what appeared to be a gaff, President Joe Biden, in late October, confirmed what leaders of the Chinese Communist Party (CCP) have known for decades: despite its official position of strategic ambiguity, America will very likely come to Taiwan’s aid in response to unprovoked Chinese aggression. While the White House quickly walked back the president’s comments, subsequent remarks from Secretary of State Antony Blinken and his deputy for East Asian and Pacific Affairs affirmed the Biden administration’s intent to take unspecified actions in response to Chinese attempts to alter the cross-strait status quo. The Pentagon should assume all these statements were sincere. It must now find a credible means to address the high likelihood that, as the military services are currently manned, trained, and equipped, the joint force would fail to repel a cross-strait invasion, occupation, and seizure of the island by the People’s Liberation Army (PLA). Rather than spending the next five to ten years hedging with the hope that the relative quality of its servicemembers and weapon systems will give its forces an edge over those of its PLA adversary in the latter’s backyard, America’s military leadership should admit failure now. Only after acknowledging that the PLA has won the present round will the Department of Defense’s (DoD) leadership realize the steps it must take to win the match.

America Is the Near-Peer, Not China

In a 2020 RAND study titled Military Trends and the Future of Warfare, Forrest Morgan and Raphael Cohen sum up their findings with a table of global trends, accompanied by possible American opponents, the means of U.S. warfare, the likely locations of conflict, and the reasons for the United States to engage in hostilities. One trend they identify—“increasing modernization and professionalization of near-peer forces”—would involve the United States, alongside “select allies or partners,” fighting Russia or China. They assessed this future conflict would likely play out in the East China Sea, in and around Taiwan, the South China Sea, or the Baltics. The reason: “China or Russia calculates that it can deny the United States sufficient access to defeat effort to change territorial status quo.” Substitute the Baltics for Ukraine, and any of these contingencies appear far more likely than plausible.

While the DoD has no formal definition of “near-peer adversary,” the term is common organizational jargon for references to the People’s Republic of China (PRC) and Russia. Thus, the Pentagon characterizes China as a near-peer based entirely on a set of metrics that it established to measure its own capabilities. This side-by-side comparison represents the worst qualities of institutional mirror-imaging that the U.S. intelligence community teaches all its analysts to avoid rigorously.

This unofficial term of “near-peer” is startling because, without qualification, it implies that in any engagement in which America finds itself with either or both powers, its military forces benefit from inherent structural advantages. How these advantages are manifest in any scenario is unclear. While the U.S. military may have the upper hand in certain geographic theaters and contingencies, is America Russia’s peer on the Ukrainian border or near the Baltic states? Is America China’s peer in the South China Sea? The answer is a categorical “no” regarding an ability to influence these regions via military power projection. Of all the potential flashpoints in U.S.-China relations, the starkest power asymmetry lies in the Taiwan Strait. Why then do the DoD and the broader national security community refer to China and Russia as near-peers when in the most likely future conflict, America will be at some form of inherent disadvantage?

Beyond the apparent mischaracterization of the relative local balance of power between China and the United States in and around Taiwan, the term is emblematic of the institutional hubris that characterizes how the DoD approaches adversaries and problems. In this manner, the U.S. defense establishment has fallen victim to a more expansive national curse of American “strategic narcissism,” as coined by Hans Morgenthau and referenced repeatedly by former National Security Advisor General H.R. McMaster. This sense of institutional superiority was repudiated bluntly by retired Marine Corps general and Secretary of Defense James Mattis in a “Message to the Force” in 2018 when he wrote, “We have no God-given right to victory.” The DoD just learned this lesson the hard way in Afghanistan. Given Beijing’s stated intentions and the PLA’s burgeoning operational capacity, it has no excuse for avoiding a repeat in the Taiwan Strait.

Aircraft Carriers and F-35s are not Magic Weapons

Despite being a little dated, the 2015 RAND U.S.-China Military Scorecard provides a sobering assessment of the PLA’s growing advantages across the operational spectrum. While the scorecard’s projections end in 2017, it paints a vivid picture of the speed with which the PLA has qualitatively increased its ability to defeat the American military in a Taiwan conflict. The trends have swiftly shifted in the PLA’s favor among the military capabilities identified, with the gap widening by the day.

While the PLA has been rapidly reforming and modernizing its force, the DoD continues to rely on the same traditional exquisite platforms for power projection. I argued previously for the National Interest that F-35 fighters were not the weapon Taiwan’s military forces would need to defend their island. The same applies to the DoD’s ability to defeat the PLA off the Chinese coast. The aircraft carriers and amphibious assault ships that, respectively, will carry the U.S. Navy and Marine Corps’ variants of the fifth-generation fighter will come under threat from the PLA Rocket Force (PLARF) at such extreme ranges that they will not be able to launch their aircraft within the combat radius of Taiwan or mainland China. If the vessels steam close enough to the battle area to give their pilots a chance of returning home, they will come well within the range of PLA Air Force (PLAAF) land-based aircraft and PLA Navy (PLAN) carrier-based fighters and surface combatants. America’s submarines can keep the PLAN’s surface vessels and submarines at bay in support; However, they cannot destroy the entire PLAN, which the DoD confirmed earlier this year is now the largest naval force in the world. These U.S. Navy submarines and the surface combatants that are not destroyed in the opening salvo would empty their magazines so quickly they would have to depart the battle area to rearm at ports that would be under constant threat of attack from PLAN and PLARF land-attack cruise missiles.

In early 2021, outgoing Indo-Pacific Commander Admiral Phil Davidson gave Taiwan six years in his last Congressional testimony. Within this six-year window, the most meaningful military action could occur in less than a week. Rumors abound that the PLA’s goal is to seize Taiwan in five days. In those five days, unless it makes monumental changes, the DoD should expect multiple of its beloved aircraft carriers and their associated surface combatant escorts to suffer catastrophic kills by the PLARF. Its impressive array of anti-ship ballistic and cruise missiles will kill hundreds, if not thousands of American sailors and Marines and send countless more into the waters of the western Pacific surrounded by burning metal, oil, and jet fuel. If they can even get into a position to affect the fight, Air Force, Navy, and Marine pilots will get shot down in numbers that dwarf those of the Vietnam War. In the face of this destruction, the Army will be waiting diligently on the periphery but likely play an insignificant role in the short conflict. America’s special operations forces have perfected, among other missions, the art of special reconnaissance and direct action through continuous deployments to the Middle East and North Africa over the last two decades. And because they have disproportionately deployed on America’s behalf in support of the Global War on Terror, they are not trained to be employed effectively off China’s coast in defense of Taiwan.

New Operational Concepts are Not Enough

If the global order is witnessing the age of “peak China,” the DoD does not have much time to synchronize the efforts of its services. Under Commandant General David Berger, the Marine Corps has pivoted the most effectively toward strategic competition with China. His recently released “A Concept for Stand-in Forces” perfectly sums up the strategic situation confronting the U.S. military:

Potential rivals and their proxies across the world spent decades studying the force’s ways and means of projecting power and then developed concepts and associated capabilities to counter them. These counter-intervention strategies seek to disrupt the joint force’s plans and operating methods … These rivals specifically apply counter-intervention strategies against the fleet’s freedom of action in the contested area. They develop sea denial capabilities intended to push our operating areas beyond useful ranges.

All the services have individual plans to compete in strategic competition against the threat described above. The Army has advanced “multi-domain operations” and is standing up task forces of the same name. The Navy and Marine Corps Team has merged “distributed maritime operations” with “expeditionary advanced basing operations.” To forge a more nimble and lower signature deployment stratagem, the Air Force has developed “agile combat employment.” While these updated plans are a step in the right direction, they are not enough to defeat the PLA juggernaut in the Taiwan Strait. Replacing outdated service-specific operational models with new ones is simply a continuation of the culture and decisionmaking that has led to the DoD’s current quandary.