Fighting Terror in the Pressure-Cooker Era 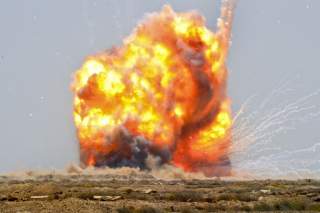 It was a traumatic two days for America—the first full weekend after the fifteenth anniversary of the 9/11 terror attacks. First came reports of a bombing near a Marine Corps charity run in Seaside Park, New Jersey. Next, a stabbing attack that claimed multiple victims in a mall in St. Cloud, Minnesota. Then, a big explosion in New York City. And finally, the discovery of multiple pipe bombs at a commuter rail station in Elizabeth, New Jersey.

In the shadow of the 9/11 remembrances, how should Americans deal with such threats?

First, we should recognize and accept two hard truths. One: ours is a free and open country, which makes it inherently vulnerable to this sort of attack. Two: our leaders need to drop the PC shtick of not calling radical Islamist terrorism by its name.

Few Americans want to combat terrorism at the cost of fundamentally changing our lifestyles or diminishing our civil liberties. Yet we must understand that holding fast to our freedoms necessarily leaves seams in our defenses—seams that even unskilled terrorists (both the mall stabber and the New Jersey/New York bomber were pretty clumsy) can exploit to hurt people.

Our law-enforcement and intelligence communities are now pretty good at stopping bad guys trying to infiltrate our shores. They can spot and intercept the big, complicated and very dangerous plots. So that’s a big improvement over the situation fifteen years ago.

But an individual or a very small group can still stay under the radar. The FBI cannot monitor the entire social-media spectrum. Even if they were granted the authority to do so, it would simply be too big a job.

And even would-be terrorists who “win” the spotlight of an FBI preliminary investigation—as happened with alleged bomber Ahmad Khan Rahami—cannot be investigated and monitored forever. There just are an insufficient number of FBI agents.

Our leaders can help the public deal with this harsh reality by being direct and honest when talking about them.

Setting off a bomb is terrorism. There is no need to wait to call it that, although it would be wise to avoid adding any adjectives until they have a good idea of who or what is behind the attack.

Similarly, when a person or group starts killing people while yelling “Allahu Akbar,” there is no need to pretend that the incident is as likely to be a mugging as it is to be terrorism. Yes, we need to patiently determine many things: how the terrorist got radicalized, if he/she had confederates, if the killer was specifically tasked by ISIS or had been radicalized remotely by ISIS or Al Qaeda’s online propaganda, etc. But early on, when people want to know what’s going on, our leaders can certainly be more forthcoming than saying, simply, “It was intentional.”

It is not racist to say an adherent of ISIS is a radical, Islamist terrorist. It does not indict every believer in Islam any more than saying a radical, anti-abortionist bomber is a Christian tars every believer in Christ. For goodness’ sake, the king of Jordan, a descendant of the Prophet Muhammad, calls them radical Islamists.

And it is absurd to argue that if American officials call Islamist terrorists “Islamist,” it gives ISIS credibility as being a force of Islam. It is arrogance in the highest degree to think that the Muslim world is waiting for the American president to “validate” anyone’s Islamic credibility.

So what should we do? How can we move from shock to preparedness?

First, America must allow its law enforcement officers to do their job. They are very good at it, especially when given the assets and support they need.

Second, the Department of Homeland Security must clean up its act. Granting citizenship to eight-hundred-plus dangerous individuals slated for deportation is an unpardonable “mistake” in today’s climate.

Lastly, all citizens must be enlisted as part of the solution. The American people cannot “outsource” our security to the government. Protecting our families and our communities is every citizen’s responsibility. Be it through exercising our Second Amendment rights, or by watching for and reporting suspicious activity, all of us can take a role in tightening our nation’s security.

Recognizing both our vulnerabilities and the threats should not weaken us. Rather, it should guide our efforts to protect our sacred liberties, our lives and our property. Americans have been doing that for more than two hundred years; we cannot stop now.