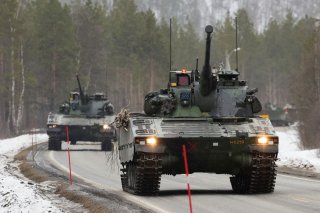 As a direct consequence of Russia’s invasion of Ukraine, Finland and Sweden, two traditionally militarily non-aligned Nordic countries, now appear to be racing towards NATO membership with cool-headed but determined steps. Already strong NATO partners with close ties to the United States, joint Finnish and Swedish NATO membership would nevertheless be a big deal for the alliance at a pivotal moment for European security.

While the debate in Finland has come farther with signs that Helsinki may seek to apply as early as May, prospects that Sweden could follow suit were raised during recent talks in Stockholm between Swedish prime minister Magdalena Andersson and her Finnish counterpart, Sanna Marin. Next month, Finnish president Sauli Niinistö is slated to make a state visit to Sweden to discuss the “changing security policy situation.” His trip could overlap with the release of the Swedish government’s forthcoming analysis of NATO membership which will follow the publication of a Finnish white paper that examines the same issue. Opinion polls in both countries show surging support for membership—with a recent Swedish survey showing a record-high 57 percent of Swedes in favor.

While some experts have cautioned against hurrying to accept the two Nordic states into the alliance for fear of unnecessarily provoking Moscow or extending NATO’s land border with Russia at a time of heightened military tensions, the benefits of swiftly granting them membership, should they choose to apply, far outweigh the costs.

For starters, Finnish and Swedish NATO membership would serve as a powerful rejoinder to Vladimir Putin’s unprovoked war in Ukraine. It would underscore what a colossal strategic mistake the invasion is for Russia by tipping Finland and Sweden over the edge, thus bringing NATO closer to Russia’s own border. While Russia has repeatedly warned of “military and political consequences” should the two countries join NATO—including recent threats by Dmitry Medvedev to deploy nuclear weapons to the area—their membership would demonstrate that Russia cannot rule by intimidation or deny European nations the right to make sovereign decisions about their own security. This is ultimately what the war in Ukraine is all about. By granting them membership, NATO would also signal that its open door policy remains vibrant. For aspiring countries like Ukraine and Georgia—both of whom view Finland and Sweden as key partners—this should be welcome news.

Second, NATO deterrence and collective security efforts in the Baltic Sea region would get a boost, reducing the likelihood that the war in Ukraine would ever spill over into NATO territory. While Finland and Sweden already cooperate closely with NATO on regional security matters, becoming full members of the alliance would help NATO defend the Baltic states in the event of an Article V contingency. As NATO is planning additional steps to enhance the security of its eastern flank at its upcoming summit in Madrid in June, Finland and Sweden are well-positioned to make vital contributions. Stronger Nordic defense cooperation with members Denmark and Norway would also benefit the wider region, as would closer EU-NATO collaboration.

Third, Finland and Sweden would bring a unique set of assets and capabilities to the alliance. Both countries have advanced militaries that are already highly interoperable with NATO forces and have contributed to all major NATO operations in recent years. For its part, Finland, which can mobilize a 280,000-strong force and has committed to a 70 percent increase in defense spending, was the first European country to receive the American-made Joint Air-to-Surface Standoff Missile (JASSM) and recently decided to purchase sixty-four F-35 fighter jets. Meanwhile, Sweden has a highly professional military and recently boosted defense spending with the goal of reaching the 2 percent defense spending target “as soon as possible.” Sweden has also beefed up its military readiness since Russia’s annexation of Crimea in 2014, including by being the first non-NATO country to purchase the Patriot air defense system.

Besides military capabilities, both countries have a long tradition of implementing a “total defense” doctrine that emphasizes civil defense and resilience and would bring important first-hand knowledge of countering hybrid warfare and disinformation threats to the alliance. Both countries are also sophisticated technological leaders home to companies such as Nokia and Ericsson. Finland and Sweden could help the alliance deepen its technological edge in artificial intelligence and 5G/6G. Moreover, with geographical proximity and a long history of dealing with Russia, Helsinki and Stockholm have a unique knowledge and understanding of Russia and the “High North” that would benefit the alliance in supporting Europe’s territorial defense.

Finally, at a time when Western democracy is under pressure from populists and nationalists at home, the fact that Finland and Sweden are both solid democracies—ranked among the top five democracies in the world according to the Economist Intelligence Unit’s Democracy Index—is not insignificant. Their membership would help reinforce NATO’s role as a political alliance of democracies with shared values, an increasingly urgent priority as the West confronts growing authoritarian challenges from Russia and China.

While the decision over whether and when to apply is ultimately Helsinki’s and Stockholm’s to make, NATO leaders would be hard-pressed not to recognize the many upsides of their membership potential. NATO leaders should therefore reiterate that Finland and Sweden are welcome to apply, quickly process their applications, and not hesitate to provide security guarantees before their applications are finished being reviewed.

Against the backdrop of Russia’s brutal war in Ukraine, NATO’s summit in June must be a major turning point for the alliance. While allied leaders are expected to agree on bolstering NATO’s eastern military presence and adopt a new Strategic Concept, embracing Finnish and Swedish membership in the alliance would also serve as a powerful rebuttal of Putin’s war in Ukraine, demonstrate NATO’s enduring vitality, and enhance the alliance’s security at a critical juncture.

Erik Brattberg is a Senior Vice President at the Albright Stonebridge Group and a Nonresident Senior Fellow at the Atlantic Council’s Europe Center in Washington, DC.