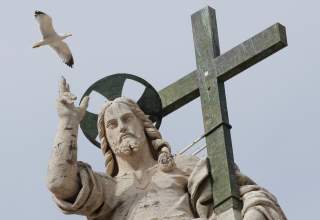 ANYONE FAMILIAR with the nearly 2,000 year history of the papacy—and the long list of villains, ciphers and oddities occupying the papal throne between the reigns of many true saints, sages and statesmen—must sometimes wonder if there is a papal equivalent to the Peter Principle. As almost everyone knows, the Peter Principle posits, and experience certainly confirms, that people in large entities such as corporations and bureaucracies tend to be promoted to the level of their incompetence. In the case of the papacy, what one might call the St. Peter Principle often yields the same result. Never was there a more perfect example of the St. Peter Principle than the longest-reigning (1846–78) Pope of them all, Pius IX, the subject of a new political biography by David I. Kertzer.

Pius IX, or Pio Nono as he was known to the Italian faithful and not-so-faithful, was one of those kindly, virtuous and well-intentioned fellows who, in normal times, might have been able to handle the responsibilities that were thrust upon them—the examples of King Louis XVI of France and Czar Nicholas II of Russia come immediately to mind—but who simply weren’t up to their jobs in perilous times. There is a certain poetic justice to the fact that, in recent years, Pius IX and Nicholas II have both been proposed for sainthood in the Roman Catholic and Russian Orthodox churches respectively. Both men were worthy but inept martyrs to their beliefs although Nicholas, murdered by the Bolsheviks in 1918 along with his family, paid a far higher price for his martyrdom than Pius, who spent the last years of his life in luxurious, self-imposed confinement in the Vatican, expiring at the age of eighty-five.

In the case of Pius, religion had everything—and nothing—to do with his martyrdom. As Pope, he was spiritual head of the oldest and largest branch of Christianity. Indeed, in his own view, he was the sole legitimate head of all Christendom. Hundreds of millions of faithful Catholics around the world gladly accepted him as their pastoral leader without taking any interest in diplomacy or power politics on the Italian Peninsula which, in June of 1846 when he was elected pontiff, was still what Metternich dismissed as a “geographical expression” rather than a unified state.

FAR FROM being a nation, Italy in the middle of the nineteenth century was a crazy quilt of lesser kingdoms and principalities (as well as tiny San Marino, an ancient republic that nobody thought worth overrunning). Large tracts of it were governed directly, or through family branches, by the powerful Habsburg Empire, including the rich province of Lombardy-Venetia that included what had once been one of the world’s great maritime trading powers, the Venetian Republic. The two biggest homegrown Italian powers occupying opposite ends of the boot were the Kingdom of Sardinia, ruled from Turin by the House of Savoy in the north, and the Kingdom of the Two Sicilies, ruled by a Bourbon dynasty out of Naples in the south.

Smack in the middle of this geopolitical mélange was a backward, feudally-governed chunk of real estate—swampy, impoverished and riddled with corruption—that, with periodic expansions and contractions over the centuries, had been the earthly domain of the heirs of St. Peter, ruled from their religious and political capital, Rome. At least one Pope, Julius II (reigned 1503–1513) spent more of his time in the field commanding Papal troops or playing at power diplomacy than in spiritual affairs, although he did find time to patronize Michelangelo, the young Raphael and other artistic geniuses whose masterpieces are still on display in the Vatican. Other than its contributions to art and architecture, however, the Popes’ temporal realm—as opposed to their sacred role—could claim hardly any historical accomplishments. One of the few was a pioneer example of feminism run rampant. During the eleven-year reign of Pope Innocent X, an elderly, isolated misanthrope specializing in nepotism, the real reins of power were held by various greedy members of his family. Foremost among them was his termagant sister-in-law, Olympia Maidalchini, who systematically looted the Vatican treasury and controlled Papal patronage. As a leading churchman of the time, Cardinal Allesandro Bichi, remarked when Innocent X was settled on as a compromise choice to succeed Pope Urban VIII, “We have just elected a female Pope.” Which, in most temporal rather than spiritual respects, Olympia certainly was. Other than this rather forward-looking event, the Papal States were historically stagnant.

Even the name reflects the patchwork nature of the Popes’ dominions; rather than being known as the Papal State, they were usually called the Papal “States.” Papal tenure had always been a dicey business, with various early, medieval and renaissance Popes being murdered, mutilated or driven into exile, either by rival claimants to the Throne of St. Peter or by the Roman mob. Pope Formosus was even posthumously put on trial during the Cadaver Synod. But all such disturbances had ended with re-establishment of the Papal order. Even the French Revolution and Napoleon Bonaparte’s subsequent First Empire only resulted in a short-lived Roman Republic which morphed, simultaneously with Bonaparte’s own transformation from revolutionary hero to arriviste emperor, into the Kingdom of Rome (with Napoleon’s infant son proclaimed titular “King of Rome” much as heirs to the British throne are invested with the title “Prince of Wales”).

WITH NAPOLEON'S final defeat at Waterloo in 1815, the Congress of Vienna seemed to have engineered the restoration of the old European order, including the full restoration of Papal temporal territory and powers. Actually, it was a rather streamlined, updated version of the old order with many small principalities annexed or eliminated and a handful of major monarchical powers—notably France, Great Britain, Prussia, Austria and Russia—dominating their smaller neighbors. With the exception of Britain—which, since the 1688 deposition of James II, had been a constitutional monarchy—this meant that, except for Switzerland, almost all of Europe was once again governed by monarchs claiming, at least nominally, to rule by divine right. Since all of the rulers of Italian kingdoms and principalities, and many of the rulers of German principalities were Catholic, and, since Austria, France, Spain and Portugal were all Catholic countries ruled by Catholic sovereigns, supporting the Papal claim to a divine right to govern the Papal States was not only a matter of faith for many crowned heads but also a symbolic way of legitimizing their own claims to divinely-ordained rule.

The cracks in Metternich’s new “old order” of divine right monarchies didn’t begin to show until 1830, when a popular uprising in Paris drove Charles X, the last legitimist King of France, from the throne. He was succeeded by a transitional figure, his cousin Louis Philippe. A member of the junior, Orleans branch of the dynasty, Louis-Philippe presented himself as a “Citizen King,” chosen by popular will rather than divine right, replacing the ancient white-and-gold fleur-de-lis banner of the Bourbons with the tricolor of revolutionary and Napoleonic France, and fashioning himself King “of the French” rather than King “of France” in a semantic bow to popular rule. He maintained, however, most of the traditional institutions of the monarchy, including close ties to the Catholic Church and the Papacy. Louis-Philippe would govern until 1848, when a stronger revolutionary wave would sweep over not only France, but most of Europe, including the Papal States.

Pius IX, whom Kertzer somewhat dubiously describes as the “most important” Pope in modern history, was born Giovanni Maria Mastai-Ferretti, the fourth son of a minor Italian aristocrat and, like his father, entitled to the courtesy honorific of “count,” on May 13, 1792. Thus, he was just old enough to have vivid memories of the pre-1815 revolutionary and Napoleonic convulsions experienced by the Papacy as well as the rest of Europe. A sickly and probably epileptic child, he served briefly in the Papal Guardia Nobile (Noble Guard), a mainly ornamental unit of aristocrats with more pedigree than martial ardor. According to one nineteenth-century memoirist, the young guardsman fell in love with a “Miss Foster,” an Irish girl of good family, and became engaged to her. Unfortunately, young Giovanni’s family didn’t approve of the bride-to-be. In the first of many examples of his yielding to the pressures of stronger personalities around him, the hapless Giovanni failed to show up at the Church of San Luigi dei Francesi for the nuptials. What subsequently became of “Miss Foster” is not known but, presumably, she did not enter a nunnery. As for her erstwhile suitor, instinctively rather than intellectually religious, and never a deep theological thinker, he ended up taking holy orders in 1818 after the manner of countless other younger sons of the Italian aristocracy, urged on, it is said, by a pious mother. By 1827, aged thirty-five, he was named archbishop of Spoleto, “a town midway between his hometown and Rome,” remarking to a friend at the time that, “God really is having some fun on earth, for he has wished to promote a miserable insect to such an honor,” a half-serious, self-deprecating tone he would often use when referring to himself.