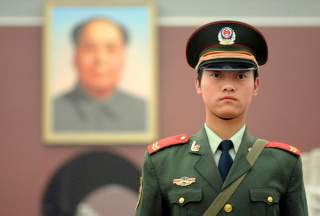 In the last twenty years, China has quickly ascended from a regional to global military power. A generation ago, the People’s Liberation Army was armed with antiquated weapons and oriented towards a manpower-intensive “People’s War”. In the intervening period China has gone from a green to blue water navy, the air force is actively developing so-called fifth-generation fighters, and the army has been extensively modernized.

A vast array of new Chinese weapons are under development, some alarming in their potential.

China’s neighbors and the United States are observing China’s buildup with interest and concern. China is showing itself to be particularly interested in projecting military power in support of territorial claims in the East and South China Seas. Weapons that empower China to take decisive military action in support of such claims could escalate a regional crisis into a larger one involving Washington.

China recognizes the potential for conflict with the United States, however small, and is planning accordingly. China is pouring resources into weapons specifically designed to target American forces and limit their ability to operate near the Chinese mainland. These “anti-access, area-denial” (A2/AD) weapons have the potential to exclude American forces from China’s innermost defense zone: the so-called “First Island Chain” consisting of the Kuril Islands, Japan, Taiwan, the Philippines and Borneo.

The chances of a shooting war between China and the United States are remote, and neither is set on war with the other. However, the extent to which the interests contradict or compete with each another means war cannot be entirely ruled out. With that in mind, here are the five Chinese weapons the United States fears most.

The most dangerous weapon to U.S. forces in the Asia-Pacific region is the Dong Feng-21D anti-ship ballistic missile (ASBM). Somewhat prematurely dubbed “the Carrier Killer”, the DF-21D is a medium-range ballistic missile specifically designed to attack American aircraft carriers, skirting the defenses of a U.S. naval task force to attack ships from above at hypersonic speeds.

DF-21D is a land-based system, with an estimated range of up to 1,500+km. Once launched, the missile would release a reentry vehicle traveling at speeds of up to Mach 10-12. The resulting velocity and kinetic energy—to say nothing of the reentry vehicle’s payload—would cause serious damage to even the largest naval vessels. Nobody knows for sure, but it is believed direct hits from a DF-21D could be enough to put an aircraft carrier out of action, or even sink it.

Mounted on a wheeled transporter and launcher, the DF-21D would be road-mobile and thus extremely hard to locate before launch. The reentry vehicle’s hypersonic speed would make it difficult—but not impossible—to shoot down.

The DF-21D has an Achilles’ heel, the so-called “kill chain” of sensors, relay stations, and command and control centers required to detect, identify, track, and hit a ship with a ballistic missile. There are many links in the chain leading to a successful DF-21D launch, and breaking just one would interrupt the entire process.

China would have to devote considerable reconnaissance assets to killing a carrier and maritime surveillance is not China’s strong suit. Land-based, over-the-horizon radars are imprecise, and maritime patrol aircraft, UAVs and submarines will be vulnerable to the carrier’s air wing. Only China’s satellites have the ability to provide tracking data, and those can be jammed or otherwise disabled.

The DF-21D was allegedly tested in early 2013, when two craters were observed in an outline of an aircraft carrier in the Gobi Desert.

The DF-21D weapon may be operational, but the kill chain is likely not, and it may be years before the entire system is fully operational. Still, the prospect of a weapon that can kill 5,600 Americans, destroy seventy aircraft, and destroy a pillar of American power projection worldwide is a sobering one to contemplate.

China’s first fifth-generation fighter, the J-20 is a large, twin-engine aircraft currently in the demonstrator phase. The J-20’s mission set is unknown, but the aircraft’s robust design seems to support it going in a number of different directions. The aircraft promises to be long-range, fast- and low-observable—if not outright stealthy. China has built three prototypes, the latest flew in early March 2014. The aircraft is projected to enter service some time around 2020.

A striking, delta-winged design complemented by large forward canards and a twin tail, the J-20 is China’s most ambitious aircraft project ever. The aircraft is speculated to mount a modern AESA phased array radar, an electro-optical targeting system. The two large internal weapons bays could conceivably carry a payload of air-to-air, land attack or anti-ship missiles.

The most obvious role for the J-20 is as an air superiority fighter. The J-20’s long range means the fighter can operate farther off China’s coast, intercepting attack and bomber aircraft including F/A-18 fighter bombers and B-1 and B-2 bombers. As a long-range fighter, the J-20 could also patrol disputed territories, particularly in support of China’s recently declared Air Defense Identification Zone.

China could also use the the J-20 to target American support aircraft. Airborne early warning aircraft such as the E-3 Sentry and E-2C Hawkeye and aerial refueling aircraft such as the KC-135 and KC-130 are key assets that allow American forces to operate at long ranges. J-20 fighters equipped with long-range air-to-air missiles could attempt to shoot these aircraft down, crippling American and allied air forces.

Another possible role for the J-20 would be to attack American ships and bases in the Asia-Pacific. Groups of radar-evading J-20 fighters carrying land-attack missiles could precede a Chinese conventional ballistic missile strike, taking out American surface-to-air missile batteries, air bases, radar stations, and command and control targets across the Pacific. The strike would suppress American defenses and pave the way for conventional ballistic missiles strikes.

Time will tell what direction—or directions—the J-20 will take. Not knowing what the J-20 is designed to do, however, is an unwelcome unknown in a world with a twenty-year lead time on fighter jets.

For decades, American space-based military assets have given U.S. forces a considerable advantage on the battlefield. Satellites are essential to the American way of war. This is especially true in the Asia-Pacific, where distances from the continental United States are measured in thousands of miles.

China has at least an operational weapon, the SC-19. A derivative of the DF-21, the SC-19 ballistic missile is equipped with the KT-2 (a kinetic kill vehicle). Launched into space, the KT-2 is guided to target by infrared sensors. The KT-2 does not have an explosive warhead but destroys enemy satellites by colliding with them.

In 2007, an KT-2 struck and destroyed an aging Chinese satellite. In May 2013 China launched what it described as a “sounding rocket” carrying high-altitude experiments. U.S. intelligence believes that this was actually an SC-19/KT-2 test. The SC-19 is believed to be capable of reaching medium earth orbit, which would put American GPS navigation satellites at risk.

Evidence suggests that China intends to put the SC-19 missile on wheeled transporters and launchers. With more than 1.86 million miles of paved roads in China, locating and destroying mobile Chinese ASAT weapons would extremely difficult.

The use of anti-satellite weaponry by China in any future conflict would be roundly denounced. Still, as dependent as U.S. forces are on satellites the temptation to take the first shot in space would be difficult to resist.

Power projection is becoming increasingly important to China, particularly to enforce territorial claims in the East and South China Seas. China’s ability to land amphibious troops on some island chains such as the Senkaku, Paracel and Spratly islands could embolden the leadership to do exactly that.

The three Type 071 ships were built by the Hudong-Zhonghua shipyards of Shanghai. Each ship displaces 20,000 tons and is nearly 700 feet long. The 071 class can transport up to a battalion of marines—roughly 400 to 800 troops—and up to eighteen armored vehicles.

The ships have a flight deck capable of simultaneously operating two W-9 troop-carrying helicopters, and can store another four in a large hangar. The ships also have a very long well deck that can store and launch amphibious vehicles, rigid-hulled inflatable boats, and four Chinese troop-carrying hovercraft similar to the American LCAC.

China’s 071 amphibious transports are based with China’s South Seas Fleet, where they can be used to intimidate—or invade—Taiwan. However, like Western navies, China has been quick to embrace their use in other roles. In addition to assaulting coastlines and islands, Gators can also serve in the command and control, disaster relief and humanitarian assistance roles. One transport, Jinggangshan, is currently in the Indian Ocean as part of the Malaysia Airlines Flight 370 recovery effort.