To Fix the South China Sea, Look to Taiwan 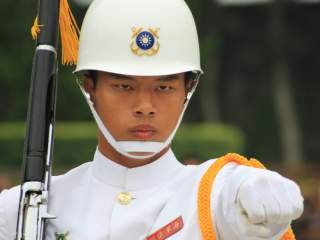 Outgoing Taiwanese president Ma Ying-jeou’s controversial trip to Itu Aba—the only island Taiwan controls in the South China Sea—has drawn a sharp rebuke from Washington. The spokeswoman for the American Institute in Taiwan, the unofficial U.S. embassy, expressed disappointment following the announcement of the visit, condemning it as “extremely unhelpful.”

While the State Department may be right to suggest that the visit “does not contribute to the peaceful resolution of disputes in the South China Sea,” the Obama administration should take care to consider how we arrived at such a point.

Ma Ying-jeou, of course, knew the White House would read his day trip as an act of defiance. Taipei reportedly alerted Washington only a few days prior to the visit and the public announcement came just twenty-four hours in advance, ensuring that Washington would not have time to mount sufficient pressure to dissuade Taiwan’s president from his intended course.

Dissuasion may have been difficult in any case, for Taiwan has been backed into a corner. Setting aside the merits of Taiwan’s South China Sea claims, its status as a claimant is no more or less legitimate than that of the other disputants. But following the Southeast Asian claimants’ lead, Washington has essentially ignored Taiwan’s role in the sea. Taiwan has been treated not as a coequal claimant, but as a complication, despite the fact that Ma is perhaps the only leader to have put forth a thoughtful—if difficult to enact—peace plan for the region’s troubled waters.

When asked about Ma’s South China Sea Peace Initiative after he proposed it last May, a State Department spokesman issued a supportive but anodyne statement expressing lukewarm appreciation. In reality, it seems that the United States does not truly welcome any action from Taiwan on the South China Sea. Washington wants Taipei both to abide by international maritime law (as the United States understands it) and to refrain from differentiating its claims from those of the mainland, which could lead to cross-Strait tension and reveal America’s one-China policy as divorced from reality. That’s a difficult and frustrating tightrope for Taiwan to walk. Taiwan, effectively, can do no right when it comes to the disputes.

Recent events, moreover, have heightened Taiwan’s isolation and deepened its distrust of an international order from which it is largely excluded and in which Taipei finds it difficult to defend its interests. Particularly frustrating for Taiwan has been the Philippines’ arbitration, vocally supported by the United States, filed with the Permanent Court of Arbitration (PCA) regarding the legality of Beijing’s South China Sea claims.

As part of the court case, the Philippines has asserted that Itu Aba is a rock rather than an island—a dubious claim and one designed to maximize the Philippines’ potential exclusive economic zone. That assertion has certainly angered Taiwan, but not nearly so much as the PCA’s refusal to accept submission of any Taiwanese documentation arguing the contrary or even to allow Taiwan to observe the proceedings.

In other words, Taiwan has increasingly felt as if it is shouting into the wind. The international community has pointed its collective TV remote at the island and pressed the mute button, and done so at a time when China presents an ever greater threat to Taiwan’s survival, and when the United States is enhancing security ties with all of its Asian partners except Taipei, from which Washington has distanced itself. Taiwan can be excused for feeling somewhat insecure.

No country, of course, can sit idly by while its sovereignty and territorial integrity are challenged. And so Taiwan determined that if it would not be heard, it would surely be seen.

Is Ma’s visit “disappointing”? Sure. Is it “extremely unhelpful”? That’s overstating things. The hullabaloo over the visit seems likely to subside fairly quickly, and the other claimants will almost certainly revert to essentially ignoring Taiwan. The fact is that when it comes to the South China Sea disputes, Taiwan—or rather, the nature of Taiwan’s future relationship with China—is a complicating factor. It is the elephant in the room, and nobody wants to poke it.

Going forward, then, will Taiwan seek even more provocative means of asserting its claims as its options for engaging with other disputants remain narrow? Possibly, but such an outcome is avoidable if Washington not only recommits to, but doubles down on, its security relationship with Taipei.

The Obama administration and its successor must sell Taiwan the arms it most needs to defend itself; expand joint training and include Taiwan in multilateral military exercises; encourage and facilitate Taiwan’s security ties with other Asian democracies, especially Japan and the Philippines; welcome Taiwan’s participation in the Trans-Pacific Partnership free trade agreement; make Taiwan’s participation in international organizations a priority for the State Department; and convey to Taiwan a belief that the island can play a meaningful role in resolving regional disputes. All of these efforts will make for a significantly more secure Taiwan, and a more secure Taiwan will see less need to take controversial measures in defense of its interests.

In 1967, presidential hopeful Richard Nixon argued that, sooner or later, the United States would have to welcome China into the “family of nations.” A few short years later, he did so. Isn’t it time the United States did the same with Taiwan?