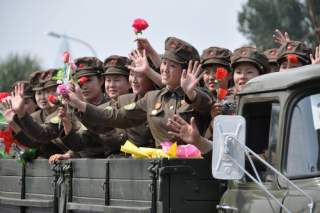 The chief challenge for U.S. and South Korean policymakers in dealing with North Korea’s nuclear ambitions is a “goals dilemma.” The policy is committed to denuclearization but it is a goal that is near impossible to reach and one that cannot be altered. Moreover, the one route likely to achieve the goal, North Korea’s demise, requires paying a price few are willing to pay.

Once again, it was a tense spring in Korea. A confluence of events including the January nuclear-weapons test, February satellite launch, the subsequent ratcheting-up of sanctions, ROK-U.S. spring exercises, and North Korean threats to nuke the United States should it invade the North put everyone on edge. Adding to this, North Korea held the Seventh Party Congress in May, the first since 1980. As expected, there were few surprises or indications of policy shifts.  Kim Jong Un received a new title of Party Chair and announced an economic plan that lacked details. The event was largely an effort to consolidate his political power and it affirmed North Korea’s determination to retain its nuclear weapons.

In the wake of all these events, there has been renewed criticism of U.S.-ROK policy and its inability to rein in North Korea’s behavior and nuclear ambitions.  The chief problem is a dilemma over policy goals. Washington and Seoul have remained firm in the goal of denuclearization. After North Korea’s fourth nuclear test, Secretary of State John Kerry declared, “we do not and will not accept North Korea as a nuclear armed state, and actions such as this latest test only strengthen our resolve.” Yet it has been clear that North Korea has no intention of voluntarily relinquishing its nuclear program. Thus, there is little chance of reaching the desired outcome.

When faced with a goal that is unreachable, logic would suggest altering the goal. Yet for good reason, the United States and South Korea cannot and should not do so. To abandon denuclearization would undercut regional stability and alliance relations, not only for Washington and Seoul but also Tokyo. More importantly, it would undercut U.S. and global non-proliferation efforts while damaging the Nuclear Non-Proliferation Treaty (NPT). Acceding to North Korea’s nuclear-weapons status could encourage other would-be proliferators to leave the NPT and pursue nuclear weapons. Thus, few are willing to set aside denuclearization and accept North Korea as a legitimate nuclear state.

There is one possible path to denuclearization: the collapse or elimination of the North Korean regime followed by reunification of the Korean Peninsula under Seoul’s leadership. While some have called for this action, there would likely be a steep price to pay. When thinking about what a “collapse” might look like, the possible scenarios to pursue that route to denuclearization are bleak. Putting this all together, the United States and South Korea have a goal they cannot reach but also cannot change without an associated cost that is too high to pay.

What is to be done with this “goals dilemma”? Washington and Seoul must retain denuclearization as the final goal; to abandon denuclearization would seriously damage nonproliferation efforts. But it needs to be reconfigured as a long-term goal that might take years to reach because the problem occurs when denuclearization is a short-term objective and a precondition for dialogue making the possibility for talks near impossible. Instead, retain denuclearization as an emphatic long-term goal while continuing efforts to seek dialogue with North Korea. Some level of regular contact with Pyongyang can be useful if for no other reason than to lower tension levels that generate the conditions for miscalculation, mistakes and violence, as well as possibly to pursue shorter-term goals such as a moratorium on weapons testing or reopening communications channels. All of this needs to be done with a firm hand that maintains close cooperation between Washington and Seoul along with a strong deterrence posture through the alliance.

To be sure, I am not optimistic that dialogue will reduce tensions substantially or soon and, it’s not clear how much Kim Jong Un even wishes to pursue this route, despite his recent offer for military-to-military talks with the South. Maintaining tensions with the United States and South Korea provide justification for North Korea’s national-security state and support for Kim’s regime. Indeed, North Korean behavior has not created much of an opening or “political space” for U.S. and ROK leaders to pursue dialogue. Moreover, dialogue does not mean caving in to Pyongyang’s demands or rewarding bad behavior. Yet given the “goals dilemma” and the need to avoid crises, it is important to continue making the effort.

Terence Roehrig is a professor of national-security affairs and director of the Asia-Pacific Studies Group at the US Naval War College. These views are the author’s alone and do not represent the official position of the Department of the Navy, the Department of Defense, or the U.S. government.