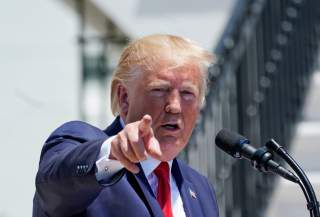 “Jamie is an extraordinary choice to lead RFE/RL at this critical juncture,” said RFE/RL and United States Agency for Global Media (USAGM) Board Chairman Ken Weinstein. “Jamie’s understanding of geopolitics, passion for human rights and broad contacts in Washington and around the globe make him ideally suited to lead the network in delivering top-rate content… in Eastern Europe, Eurasia, Central Asia, Afghanistan, Pakistan, and Iran.” Weinstein is also president and CEO of the Trump-friendly Hudson Institute.

RFE/RL is an outgrowth of the original Radio Free Europe, which beamed behind the Iron Curtain during the Cold War. To its supporters, it’s a critical bulwark against a revanchist Russia. To its detractors, it’s counterproductive and yesterday’s news. “RFE/RL staff are on the front lines bringing independent news and information to those who need it most,” Fly said. As a senior fellow at the German Marshall Fund, he worked, among other things, on a project called, “Countering Authoritarian Interference in Democracies: A Bipartisan Approach.”

But Fly, a longstanding neoconservative—he was formerly executive director of the Foreign Policy Initiative—and ex-Marco Rubio staffer, would seem an unusual fit for any Trump administration post, considering he once joined the ranks of GOP national security officials who opposed Trump in unsparing terms.

“His vision of American influence and power in the world is wildly inconsistent and unmoored in principle,” Fly and others wrote three years ago as then-candidate Trump was securing the Republican nomination. “He is fundamentally dishonest. … Mr. Trump’s own statements lead us to conclude that as president, he would use the authority of his office to act in ways that make America less safe, and which would diminish our standing in the world.”

Fly was joined in this effort by those who have gone onto become leading critics of the Trump presidency, including Max Boot, another Rubio alum, Tom Nichols and neocon eminence grise Robert Kagan.

Fly is dramatically “out of step with Trump’s foreign policy,” Justin Logan of the Center for the Study of Statesmanship told me. Fly’s hiring comes at a time when the president himself has conceded personnel has been the most glaring flaw of his administration.

A President Fly is another victory for the hawks. “Fly has advocated very disproportionate bombing campaigns in Iran for years,” reports Logan. “If Trump makes Fly his guy at RF/ERL, it’s an alarming sign.” Logan also noted: “If he were an experienced leader of a media organization, it would at least be understandable,” but he does not.

But Fly has his champions. U.S. Agency for Global Media CEO John F. Lansing is “confident” Fly is the man for the job. And traditional conservative defenders of the president, such as the Heritage Foundation, note that, policy-wise, this is the most anti-Russia administration since Reagan.

Plus, Fly is hardly alone. Once a red line, previous “NeverTrump” status, or an analog, no longer represents an iron barrier to an administration appointment. Ask Elliot Abrams, Rex Tillerson’s original choice for deputy secretary of state, who was blocked by Steve Bannon in early 2017.

Fly was appointed by RFE’s board of directors, and not by Secretary of State Mike Pompeo or Trump. But still, it is striking that the board apparently did not fear any reprisal from the White House. Fly will thus  join the growing ranks of the formerly Trump-hostile who snagged government jobs, including senior State advisor Mary Kissel, Syria envoy Jim Jeffrey and Abrams, later named Venezuela envoy.