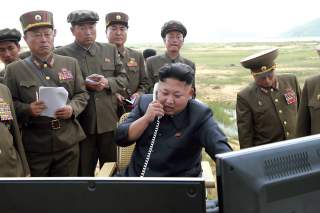 The able skeptic and realist Ted Galen Carpenter has recently counseled that “if Russia wants the Syria mess, let them have it.” One would think that after three failed wars in the Middle East (Afghanistan, Iraq and Libya) that strategists in Washington would be wiser than to go looking for a fourth (or fifth) quagmire. Perhaps it’s time to let other global powers take a turn at trying to stabilize some of the many simmering crises roiling the global order? Maybe “America First” should partly mean that other significant actors play a larger, constructive role as “responsible stakeholders” in global security, easing the burden on the United States? After all, American infrastructure would not be in need of such an obvious overhaul if vast resources had not been squandered in the blood-soaked sands of the Middle East for so many years with no end in sight.

Of course, China is unlikely to have the capability, interest, or will to stabilize the Middle East anytime soon, but what about Beijing sorting out its own neighborhood at the very least? More than a few Asia hands have opined over the last two decades that the Korean Peninsula must form the critical test for Chinese regional leadership in the Asia-Pacific region. Indeed, the heart of the Obama administration’s “strategic patience” strategy seemed to rely on the assumption that only China could really “solve” the North Korean nuclear issue and that Beijing would have to act eventually to reign in the dangerous behavior of its erstwhile and increasingly truculent client. The Trump administration’s policy has seemed even more naïve in its trust that China could handle the issue alone—not only in overestimating Beijing’s influence in Pyongyang, but also in believing that the United States itself could simply double down on its usual set of policies (e.g. more economic sanctions, more human-rights pressure and more bomber flights) without rethinking its own approach in the least. How’s that working out?

Washington now may confront the last possible window of opportunity to arrest the further escalation of the Korean Crisis. To do so will involve accepting Beijing’s proposal to halt the large, annual U.S.-South Korea joint military exercises in return for a freeze on North Korean nuclear and missile testing. Let us return to that and other common sense steps to deescalate current tensions at the conclusion of this essay. In the meantime, this Dragon Eye column seeks yet again to demystify Beijing’s approach to North Korea by discussing some relevant Chinese-language materials. The April 2017 issue of Chinese National Geographic (中国国家地理), a stellar magazine, carried an in-depth description of a heretofore unknown Chinese town called Hunchun (珲春).

This medium-sized town (population 250,000) forms the furthest eastern protrusion of Jilin Province. With its “blue water dream” (蓝海梦), Hunchun actually may hold the key to that Chinese province’s future, according to the article. The author marvels that this town has such a large hospital and discovers that thousands of Russians are visiting each year to receive medical care in Hunchun, which is located just 180 kilometers from the Russian city of Vladivostok. It is noted that more than a few Russians have settled down in Hunchun and many have started businesses there too. A binational (Chinese-Russian) couple from Hunchun is featured in the article, and the Chinese husband complains only that his Russian wife makes him drink coffee. The article explains that Russia’s abundant timber resources have already made wood products a major industry in Hunchun and it also profiles a new Chinese seafood mogul, who brings sixteen trucks worth of seafood from Russia (and North Korea) into Hunchun each day that find their way onto trucks, trains and even aircraft on their way to dinner plates in distant cities. But what has really revolutionized this obscure corner of China in recent years is undoubtedly the new bullet train connecting Hunchun with Jilin’s metropolis, Changchun, and hence China’s wider and very impressive high-speed rail network. The transit time for that five hundred kilometers route is reduced to just three hours and that new connectivity with China’s main urban centers may primarily explain why the place is quite suddenly a “hive of activity” (充满活力). Perhaps the author exaggerates slightly in describing the town as a “little version of Hong Kong” (小版香港), but something interesting is going on, so it seems.

Indeed, Beijing’s plans for Hunchun go beyond simply a useful link to Vladivostok, but rather it is viewed as “joining the five countries of China, Russia, Japan, South Korea and North Korea within in a maritime transport hub.” North Korea’s role in this plan is not small, since the crucial port of Rajin (罗先) is just down the road from Hunchun. That port has the possibility to unlock international trade possibilities for much of China’s northeast, including the large and rather isolated cities of Harbin, Qiqihar and also Changchun. This article from Chinese National Geographic does not focus too much on North Korea, but the author observes that one can easily find North Korean laborers “silently working” (默默工作) in Hunchun’s many busy factories. The author does not visit Rajin port, but is advised that visiting is “very convenient” (很便利的) for Chinese people. A couple of days’ notice is required, documents must be prepared and no pictures can be taken, but doing business or investing is quite simple, it is reported. There is significant discussion of North Korea’s high-quality seafood and Hunchun’s intention to export seafood products to dozens of countries.

In the final sentence of the article, Hunchun is described as a part of a larger initiative to “open and develop” Jilin Province (吉林省开放发展). Such terms have special meaning in China where they are associated with the Deng Xiaoping’s economic reforms that catapulted the southern province of Guangdong to riches. Indeed, the Rajin port will serve to connect Northeast China with the wealthier markets of southern China, but its impact on international trade is expected to be even larger. Could Hunchun “become a strategic pivot point for peace and trade for contemporary China with each of the countries of Northeast Asia?” (成为当今中国与东北亚各国经贸交往的战略枢纽和平台呢) the author of this piece asks. The article discusses a new, direct shipping route inaugurated in May 2015 from Hunchun to the giant South Korean port of Busan, which has seen ample traffic in the past year. With a variety of connections east and west, this author claims that Jilin can claim a serious role in China’s developing “Belt and Road Initiative” (一带一路). While not stated directly in this article, moreover, there could well be a role for Hunchun and Rajin in China’s ambitious arctic plans as well. However, altogether more concrete than the ambitious plans broached above was the completion of the high-speed rail link into Hunchun back in September 2015. The fact that this critical northeast artery linking Changchun with Hunchun was completed at approximately the same time as another vital northeast China route, from Shenyang to Dandong, cannot be a coincidence, but rather reflects a thoughtful and deliberate strategy. At the cost of many billions of dollars, Beijing has—with these two new high-speed rail routes—put in place the foundation stones for a geoeconomic strategy toward Northeast Asia in general and North Korea in particular. Having built these two transformative lines up to the North Korean border, does anyone think that Beijing is on the verge of imposing a draconian economic blockade on Pyongyang? It seems that Chinese planners have quite the opposite intention.

Having probed once again for a deeper understanding of China’s approach, we can now return to the policy dilemmas confronting Washington with respect to the still evolving North Korea nuclear crisis. As the most recent cover story in The Atlantic magazine makes clear (in agreement with just about every other serious treatment of the subject), there is no viable military solution to the present crisis, such that the only realistic option for the United States is unfortunately acquiescence to North Korea’s nuclear and missile developments. But have American policymakers, well acquainted with the various “sticks,” really considered the possible “carrots” that could be used to induce de-escalation and even disarmament? The imprudent and exclusive focus on “sticks” has seemed only to quicken the pace of Pyongyang’s missile and nuclear programs.

As stated at the outset of this paper, Washington policymakers should seriously entertain China’s proposal that halts North Korean nuclear and missile testing in exchange for halting the large, annual U.S.-South Korean military exercises. The proposal has just now gained momentum from an endorsement by the new South Korean president Moon Jae-in. The basic reasons why this makes sense, include the following: U.S. and ROK conventional superiority (including the training dimension) is so extensive that a halt to the bilateral annual exercise will not change the overall strategic situation; other joint training opportunities could be developed (in Alaska for example) that would reduce the impact; this step toward de-escalation could be quite easily reversed to allow for return to the status quo if Pyongyang was seen to be violating its commitments; and perhaps most importantly it allows both Pyongyang (and also Beijing) a certain degree of “face’’ (面子) as they take steps toward de-escalation. In an obvious position of strength, the United States and its allies can afford to take some risks for peace. If Washington and Seoul could take such compromising steps, there is a good chance that Beijing would drop or at least mute its objections to THAAD—an issue that has complicated peacemaking on the peninsula over the last year. The idea that the United States can never make any concessions results from a misplaced and insecure notion that American power is brittle and weak—it is not. Most obviously, there is a need to halt the trend toward escalation now to avoid inadvertent war by miscalculation, a spiraling arms race that threatens to engulf the entire region, as well as the all too likely possibility of a “nuclear proliferation cascade” that stretches well beyond Northeast Asia.