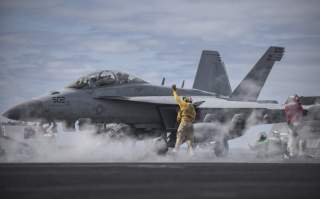 Since 2011, when the Budget Control Act put a cap on defense spending and spawned the threat of sequestration, the United States Navy has been under tremendous fiscal pressure.  While global instability and the need for a strong U.S. military have grown, funding for our Navy has been reduced significantly by an administration whose appreciation for the importance and value of our Navy is clearly insufficient.  This is a dangerous trend that must be reversed.

Each year, cuts of billion dollars have forced the Department of the Navy to come forward with one ill-advised method of cutting costs after another.  In 2013, for example, fiscal pressure drove the Navy to propose decommissioning seven cruisers and two amphibious ships with over a decade of service left in each of them.  Appreciating the combat power of these ships, Congress overrode the Pentagon’s proposal, secured additional funding, and kept the ships in service.

Frustrated on the cruiser front, the administration took a different tack in 2014.  Suffering from even deeper cuts due to sequestration, the Pentagon proposed forgoing the nuclear refueling of the aircraft carrier USS George Washington.   Forgoing this overhaul would have led to the de facto deactivation of this badly needed, multi-billion dollar asset only halfway through its life and exacerbated gaps in carrier presence that we see today. Fortunately, as with the cruisers and amphibs, Congress rejected the administration’s proposal and secured funding for the GW’s refueling, which will begin next year at Newport News.

Thanks to these Congressional interventions, the Navy still has a fleet of 10 carriers, but in 2016 a new threat to our carrier fleet has arisen.  To make possible a $7 billion cut to next year’s Navy budget, the administration is now proposing to deactivate one of the 10 carrier air wings that deploy aboard our carriers.   Doing so would violate a 2011 law that Congress passed precisely to prevent such cuts by requiring the Navy to maintain 10 carrier air wings with fully staffed headquarters.  The Navy, therefore, is asking Congress for a waiver to the law, so that it can deactivate Carrier Air Wing 14, which has been under strength in personnel and aircraft since 2013, and distribute its assets to the rest of the fleet.

As even the plan’s proponents will admit, carrier air wings are critical elements of Navy force structure.  Flying off our carriers, the strike fighters, helicopters, and support aircraft that make up each wing make it possible for our nation to project power into any corner of the globe.   When ISIL blitzed across the Middle East in 2014, it was Carrier Air Wing 8 and the USS George H.W. Bush that carried out the first strikes and help stop ISIL’s advance.  Unfortunately, in part because of the wear and tear from waging this campaign against ISIL, the Navy is now suffering from a “strike fighter shortfall,” with too few aircraft and personnel to fully equip its squadrons.

If the Navy’s budget were going to be constrained indefinitely to the dangerously low levels favored by this administration, it might make sense to cannibalize an air wing and distribute its assets to the remaining air wings.  Fortunately for the Navy, however, it is to Congress, not the White House’s Office of Management and Budget, that the Constitution grants the power “to provide and maintain a navy,” and this Congress has demonstrated repeatedly that it is both willing and able to pay for elements of Navy force structure that this administration would rather do away with.

In addition to preventing the cuts mentioned above, Congress has consistently provided the Navy with funding to procure additional strike fighters, flesh out its squadrons and bring that 10th carrier air wing up to strength.  Over the past two years, Congress has granted the Navy $2.5 billion in extra funding to procure 24 additional carrier aircraft that were on its “unfunded requirements list.”  Last year, the Office of the Secretary of Defense had the gall to tell Congress, in a fine display of written Pentagonese, that the funding it provided to meet the Navy’s “unfunded requirement is not required.”  But once again, Congress overruled the budget cutters and provided funding for another squadron’s worth of fighters.

While Congress has demonstrated that it is committed to rebuilding our Navy, the White House and Pentagon want to efficiently manage its decline.  With another budget-driven cut to Navy force structure being proposed in the President’s budget for next year, Congress must once again reject the administration’s plans.  Already, the House Armed Services Committee is moving to increase funding for military readiness, force structure, and procurement.  Working together in a bipartisan, bicameral fashion, Congress can use a fraction of that funding to keep the 10th carrier air wing in existence and halt the steady decline of carrier aviation.

Our carriers and their air wings are America’s premier means of projecting power overseas.  Right now we have a 10-air wing Navy in a 15-air wing world.  Deactivating a tenth of our force is not the answer.