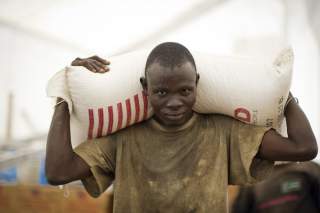 President Donald Trump’s budget outline calls for $603 billion in defense spending that represents a 10 percent ($54 billion) increase over current spending caps. The plan to offset the increased military spending by cutting nondefense discretionary spending, particularly the State Department and foreign aid, has revived the “guns versus butter” debate that warrants further examination beyond his declaration that the U.S. government will simply “do more with less.” While the president has not yet disclosed the full details for cutting specific programs and agencies, foreign aid is a critical component of U.S. foreign policy and the national-security apparatus. Both the Trump administration and Congress would be wise to carefully examine the strategic consequences of this proposal during the upcoming budgeting process.

To be clear, I fully support the president’s plan to boost military spending. After fifteen years of continuous combat operations, many members of the Armed Forces are fatigued from multiple deployments, while their equipment is run down and in dire need of maintenance and modernization. At a recent House Armed Services Committee hearing, Vice Chief of Naval Operations Adm. William Moran testified that the intense operations tempo has created a “downward readiness spiral,” where the Navy is able to satisfy only 40 percent of the demand from regional combatant commanders. Army Vice Chief of Staff Gen. Daniel Allen said that only three of the Army’s fifty-eight Brigade Combat Teams are assessed as ready to “fight tonight.” Air Force Vice Chief Gen. Stephen W. Wilson claims that fewer than 50 percent of the Air Force’s combat units are “sufficiently ready for a highly contested fight against peer adversaries.” Such testimony from senior military leaders is alarming, especially when one considers that the Pentagon has reportedly sent the White House a “preliminary framework” for options to defeat ISIS that would likely ramp up U.S. military operations in Iraq and Syria. That said, increased defense spending can and should be accomplished without resorting to foreign aid as a bill payer.

Trump expressed an aversion to nation building on the presidential campaign trail, and pledged to “stop sending foreign aid to countries that hate us.” While his plan to cut foreign aid may be a politically expedient method to boost military spending, it is strategically short-sighted and does not fully consider the implications for U.S. national security. For example, during his recent address to Congress the president said that “America is willing to find new friends, and to forge new partnerships, where shared interests align. We want harmony and stability, not war and conflict.” Foreign aid is a strategic asset that allows the State Department to more effectively use the “soft power” instruments of diplomacy and development to realize these ambitions.

Of course, the notion of cutting foreign aid is not unique to the Trump administration. In his February 2015 testimony before the House Committee on Foreign Affairs, Secretary of State John Kerry said, “After serving in public life for over three decades, I am aware that there are few more reliable—or damaging—applause lines than promising to slash the budgets of the State Department and USAID. President Reagan once lamented that, ‘Foreign aid suffers from a lack of domestic constituency.’ And it’s true that, in Washington, long-term goals can often lose out to more visible short-term projects. But that’s exactly why we need your help—to take the long view and to recognize how the relatively modest investments we make now can improve the world and enhance our own security for generations to come.”

Kerry makes the fiscal case that foreign aid is cheaper than using military force and, therefore, worth the investment. Without doubt, the United States has made some unwise and regrettable foreign aid decisions in the past. However, as Max Boot correctly argues, “that’s an argument for more focused spending, not for radically cutting the foreign aid budget.”

Part of the problem is the perception that foreign aid is a form of welfare or charity, as opposed to a reasonably inexpensive way to advance U.S. national interests. Colin Powell challenged this mindset in a 2009 Foreign Policy article where he wrote that “development is not a ‘soft’ policy issue, but a core national security issue.” To further complicate the issue, the American public is woefully uninformed on the topic of foreign aid. The “average” American thinks that the United States spends much more than the $36.5 billion currently allocated to implement a variety of foreign assistance and development programs. A 2015 Kaiser Family Foundation poll found that “on average, Americans say that spending on foreign aid makes up roughly a quarter of the federal budget” (the actual amount is less than 1 percent). Additionally, a recent Politico/Morning Consult poll revealed that 73 percent of the respondents said that foreign aid “contributes a great deal or fair amount to the national debt.” To be fair, $36.5 billion is a lot of money that could be directed elsewhere. That said, U.S. taxpayers realize a great return on their investment.

When used in coordination with the other instruments of national power, foreign aid can help the United States secure access to strategically important regions, build capable partners with shared interests that can assume more of the security burden, extend American influence, and persuade fragile and emerging countries to make the “right” strategic choices. The Marshall Plan in Europe and Japan’s reconstruction stand as successful examples of U.S. foreign aid in the post–World War II era. These investments have resulted in deep and long-lasting military and economic partnerships, while the same can be said for rebuilding efforts in war-torn South Korea, which has emerged as a stalwart military ally with a highly industrialized economy. The Carter administration’s decision to provide foreign aid to both Israel and Egypt played a major role in establishing the 1978 Camp David Accords that continue to the present day, despite the volatility in the Middle East. Additionally, Jordan is a critical partner in the fight against terrorism, and receives U.S. foreign assistance to strengthen its capacity to address internal and external threats and vulnerabilities. Finally, the World Bank offers a list of success stories in Africa, and foreign aid has played an important role in strengthening governance and promoting economic growth and reform to help ensure regional stability and respond to crises.

The importance of these “soft power” foreign policy accomplishments are not lost on the military. Soon after the Trump administration announced its budget outline, a group of 121 retired three- and four-star generals and admirals from all branches of the armed services released a letter calling on Congress to maintain diplomacy and foreign aid that are “critical to keeping America safe.” Additionally, the letter argues that “many crises do not have military solutions alone” and while the military will lead the fight against terrorism on the battlefield, “it needs strong civilian partners against the drivers of extremism—lack of opportunity, insecurity, injustice, and hopelessness.” The State Department’s budget of $50 billion is less than one-tenth that of the Defense Department, and further reductions risk the militarization of U.S. foreign policy. In 2009, then chairman of the Joint Chiefs of Staff Adm. Michael Mullen admitted that the nation had “reached for the military hammer in the toolbox quite often,” evoking Abraham Maslow’s adage, “I suppose it is tempting, if the only tool you have is a hammer, to treat everything as if it were a nail.”

The lack of investment in the other instruments of national power limits a whole-of-government approach, by over-relying on the military to solve complex problems. Secretary of Defense James Mattis fully understands the requirement to have a robust foreign aid program. In his June 2013 testimony before the Senate Arms Services Committee while serving as commander of CENTCOM, then General Mattis warned that “if you don’t fund the State Department fully then I need to buy more ammunition ultimately.”

The Trump administration’s budget outline should be viewed as a statement of intent, since Congress controls government spending and is likely to change as specific programs and proposals are considered and debated during the budgeting process. This underscores the need for an informed discussion, especially over issues where national security is concerned. To assist, Lt. Gen. H. R. McMaster and the National Security Council should develop a National Security Strategy that describes how the instruments of national power (Diplomacy, Information, Military and Economic) will be employed to achieve strategic objectives and safeguard U.S. national interests. While “America First” may succinctly capture the Trump administration’s vision, foreign aid is a good (and cheaper) way to confront the numerous challenges in the contemporary security environment by building and working with capable allies and partners that share U.S. values and interests. Now is not the time to reduce this strategically valuable foreign policy tool.

James Cook is an Associate Professor of National Security Affairs at the U.S. Naval War College. The views expressed here are his own.