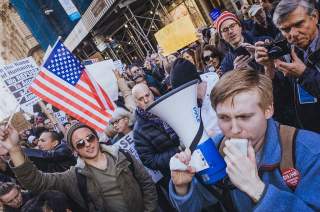 DONALD TRUMP is so singular a figure in background and temperament, so large a personality, and so seemingly immune to the usual pressures and incentives, that it is tempting to imagine that foreign policy under him will be simply the projection of his will. Think again. Like presidents before him, Trump will learn that going solo is not a recipe for an effective and enduring foreign policy. Always fraught and frustrating, the domestic politics of foreign policy have in recent years become even harder for presidents to manage. Trump will be no exception.

Even a president with greater discipline and thicker skin than Donald Trump, however, would find foreign-policy leadership daunting. Two central tasks—setting the agenda, and building and maintaining a supportive coalition—have become much more difficult as audiences have become increasingly fragmented and diverse and as politicians have refrained from horse trading for fear of WikiLeaks-style exposure. Even if Trump were suddenly to embrace the politics of unity, he would discover that a durable coalition is an unattainable dream.

Presidents have every incentive today to retreat from sweeping narratives, provide very targeted “side payments,” and craft narrow coalitions to support their policy initiatives. Barack Obama’s modest ambitions in foreign affairs, his instrumental rhetoric and his pragmatic inclinations reflected his domestic circumstances as much as they did either the world or his personality. And these same circumstances will confront President Trump.

PRESIDENTS HAVE a much freer hand in foreign than domestic policy. The president is commander in chief of the military and can call upon the State Department, the intelligence community and the larger federal bureaucracy. Not only are Congress’s formal powers in foreign affairs limited—considering treaties for ratification, issuing declarations of war, controlling the purse and holding hearings—but it has eagerly shed what few responsibilities it has. With good reason, presidents look to the international arena to make their mark, especially when their domestic programs are stymied and when they are lame ducks.

But presidents cannot long go it alone in foreign policy. They require funds, and so any major initiative eventually needs congressional authorization. They require at least the acquiescence of the public, as numerous, vocal domestic critics will scare off international partners. Sometimes, they require the public’s more active endorsement, to bolster their leverage with and clarify their intentions to foreign interlocutors. Few presidents concentrated foreign policy in the White House as much as Richard Nixon. But even Nixon knew that détente could not survive without a reservoir of public support. He and Henry Kissinger thus (over)sold détente as heralding a fundamentally changed international order. However, they never really thought of détente as an end to the Cold War, but rather as its continuation in a less confrontational guise. When it became clear that Cold War rivalry had not been extinguished but had merely gone underground, public support withered and détente collapsed.

Presidents used to have an easier time exercising leadership in foreign affairs. This was partly due to the president’s institutional advantages: as holder of the only nationally elected office, somewhat above sordid partisan politics; as commander in chief of the armed forces, in possession of classified information; and as head of the executive branch, with the power to implement and not just pronounce. These, in principle, bequeathed to presidents unparalleled legitimacy and endowed them with special authority, especially on national security. As Woodrow Wilson long ago observed, “There is but one national voice in the country, and that is the voice of the President.”

But the presidency also came to occupy a unique and preeminent place in American political culture. Americans do not look to the president to tell them what to think about specific policy proposals. But they still look to the president to make sense of developments at home and abroad, to render meaningful a world that sometimes seems disconcertingly chaotic and meaningless. As Obama observed at the end of his first term, in a moment of reflective self-criticism, the presidency is not just about “getting the policy right,” but equally about “tell[ing] a story to the American people that gives them a sense of unity and purpose and optimism, especially during tough times.” The nation’s narrator in chief resides in the Oval Office.

Leadership has never been easy: the bully pulpit has not allowed presidents to bend mass opinion smoothly to their will even on security matters, and persistent opposition frustrated the agendas of even committed, oratorically talented presidents like Franklin D. Roosevelt and Ronald Reagan. But if they played their cards right, presidents were once able to perform two essential leadership tasks.

The first involves setting the background narratives that underpin security debates and define the menu of legitimate policy options. Dominant narratives—such as the Cold War consensus or the War on Terror—impart meaning and order to global affairs by weaving present challenges, past failures and triumphs, and potential futures into a coherent tale. They limit what political actors can publicly justify and therefore what policies they may pursue. They are the terrain on which politicians, pundits and activists argue over policy. Winning the narrative is at least half the battle, and it is here that presidents have been able to shine—especially when the public has been most in need of reassurance, and when presidents have embraced the rhetoric of storytelling.

Franklin Roosevelt so well defined what was at stake in World War II, the scope of the battlefield and the nature of the adversary, that he bound his own hands when, later, he envisioned a postwar settlement at odds with that story line. George W. Bush was a far less skilled orator, but he nevertheless effectively laid out a lucid narrative after the 9/11 attacks that marginalized real alternatives, set the boundaries of national-security debate for the next decade and tilted the tables on the Iraq War. Presidents’ efforts to fix the security narrative have been more successful to the extent that the president’s voice is more authoritative and that other politicians refrain from advancing competing story lines.

The second entails forging and maintaining a stable coalition, which, in turn, allows the government to mobilize national resources and public opinion. Because mass publics are generally inattentive to politics, especially foreign affairs, they tend to follow the prompts of trusted elites. As the political scientist Elizabeth N. Saunders has suggested, this makes the president’s skill at managing elites, notably potential opponents, crucial. To marshal elite support and limit open opposition, presidents coerce (threaten punishment to compel adherence), bargain (offer side payments or limited policy concessions to procure compliance) and manipulate (manage information flows to coopt and declaw elites). Forming and sustaining a durable coalition, certainly a bipartisan one, has been much easier when politics is less polarized, when elites come from less diverse backgrounds and when horse trading takes place far from the public eye.

THIS SORT of leadership is becoming all but impossible. Three large-scale changes—the erosion of authority and community, the rise of the transnational as a sphere of political mobilization and action, and the information and communications technology revolution—are to blame. They have combined to strip presidents of their narrative authority, curb coalition building and generally handcuff presidential leadership.

The historian Daniel Rodgers has called ours an “age of fracture”—in which traditional claims to authority hold less sway, the producers of culture are multiplying and diversifying, and the bonds of national community are wearing away. As a result, social networks are becoming more homogeneous with respect to both class and political ideology. An ever-expanding array of entertainment and news—made possible first in cable television, but accelerated and expanded by the Internet—has fueled this trend, the political scientist Markus Prior has shown: the disinterested revel in their ignorance, and news junkies feed their passion more richly than ever, sometimes in partisan and ideological echo chambers. The explosion of “fake news” during the most recent U.S. election cycle, combined with unprecedented attacks on the credibility of the mainstream media, is just the next, albeit deeply disturbing, step in this seemingly inexorable process.

As a result, presidents can rarely lay claim to the authority they once did, even on matters of national security. The public sphere has increasingly become a chaotic marketplace of ideas, in which countless speakers vie for public attention and approval. Presidents can no longer count on having the national rostrum to themselves. During moments of crisis, other politicians do seem more inclined to defer to the president. But, even then, the gaps separating elites are so wide that presidents struggle to bridge those divides and lay a common foundation for debate. For years, Obama tried desperately to bring some perspective to public debate on terrorism. His insistence that terrorism is merely one challenge among many the United States faces, not an existential threat, seemed to many to confirm that the president was either naïve or duplicitous. For them, Trump’s tough talk on “radical Islam” was a welcome change. It resonated so powerfully that Trump battered Hillary Clinton with it on the campaign trail, daring her to utter the words and “tell the truth” about America’s enemies.