Forget the Middle East and Focus on the Asia-Pacific 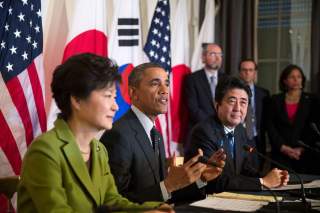 One of the Obama administration’s primary foreign-policy ambitions has been to rebalance America’s strategic equities away from the Middle East and toward the Asia-Pacific. In addition to serving as the principal engine of global economic growth, the latter region is home to five of the top fifteen defense spenders (China, Japan, India, South Korea and Australia), one of which (China) could come to approximate a peer competitor of the United States.

A growing number of observers contend, however, that in view of this year’s developments—particularly, the ascent of the Islamic State of Iraq and the Levant (ISIL) and the slow-drip incursion of Russian forces into Ukraine—the United States should set aside the much-ballyhooed pivot in favor of a foreign policy that triangulates between the Middle East, Eastern Europe and the Asia-Pacific. While intuitively sensible, that prescription is insufficiently discriminating. Domestic constraints make it especially critical to develop such a hierarchy: protracted economic stagnation and public wariness about an activist foreign policy mean the United States must be even more selective about the initiatives it pursues abroad.

Neither ISIL’s depredations, nor Russia’s behavior on its western periphery changes the realities that justify the rebalance: judging by a range of metrics—share of world population, share of gross world product, and share of global defense spending, for example—the Asia-Pacific’s centrality to the course of global order will continue to rise. It is not surprising, then, that other major powers, including the European Union and Russia, are maneuvering to strengthen their footholds there. Already, Kurt Campbell and Ely Ratner noted this May that the region contains “more than half of the world’s population…the largest democracy in the world (India), the second- and third-largest economies (China and Japan), the most populous Muslim-majority nation (Indonesia) and seven of the ten largest armies.” They cite the Asian Development Bank’s prediction that the region will contain roughly half of the gross world product and four of the world’s biggest economies before 2050.

While the Asia-Pacific’s heft in international affairs does not free the United States to ignore the rest of the world, it should frame U.S. efforts to handle crises outside the region, including the two that presently grip the world’s attention.

ISIL is vicious, even by the standards of most terrorist organizations: the head of Al Qaeda, Ayman al-Zawahiri, disavowed it this February, in part because he feared its tactics—ranging from stonings to beheadings—were undermining Al Qaeda's efforts. But the United States should not allow ISIL’s brutality to goad it into overreaction. Recall that Osama bin Laden boasted about Al Qaeda’s ability to “provoke and bait” the United States: “All that we have to do is to send two mujahideen…to raise a piece of cloth on which is written Al Qaeda in order to make the generals race there to cause America to suffer human, economic and political losses.” The United States can ill afford to allow each new face of terrorism in the Middle East—Al Qaeda core for much of the past decade, ISIL today and likely another organization in a few years—to disrupt and reorient its foreign policy. President Obama has explained that the United States seeks to “degrade, and ultimately destroy, ISIL through a comprehensive and sustained counterterrorism strategy.”

Even a circumscribed effort along these lines, however, risks enhancing ISIL’s ability to recruit new fighters and emboldening it to target U.S. personnel, facilities and interests more aggressively. It would be ironic if an initially limited response were to trigger a chain of events that makes further U.S. involvement in the Middle East necessary. The United States must weigh the imperatives of counterterrorism against the recognition that indefinite preoccupation there will constrain its ability to shape the Asian-Pacific order.

Russia presents a more complex challenge. Having hived off Georgia in August 2008 and Crimea this March, it is now undertaking to dislodge eastern Ukraine. The United States and its European allies should continue to resist this incremental campaign, which challenges the principles that have underpinned postwar international relations. There are limits, though, to what the United States can and should do.

On account of its geography and vital national interests, Russia will ultimately exercise greater leverage over the outcome in Ukraine than the United States will. It is America’s European allies, moreover, that should be providing the first line of defense against Russia’s efforts; unfortunately, though, they continue to underinvest in their own defense and free ride off of U.S. military power. Casting Russia as an unqualified antagonist, rather than a difficult but necessary partner, and abandoning areas of useful bilateral cooperation will not enhance U.S. leverage in Ukraine; it will only increase the likelihood of a new Cold War that distracts the United States from developments in the Asia-Pacific.

In truth, Russia is doing more damage to its national interests than any other country. Confronting bleak economic and demographic prospects, it continues to compound its isolation from the West and give China even greater sway in the already-asymmetric relationship. While continued Russian decline might inspire schadenfreude in certain quarters of the United States, it would not serve America’s national interests: a Russia that proves incapable of resuscitation is likely to cause more havoc in its backyard, not less. Joseph Nye recently summarized the West’s challenge as “implementing a strategy that contains Putin’s behavior while maintaining long-term engagement with Russia.”

No one knows how the myriad, interconnected convulsions now roiling the Middle East will resolve themselves, or how Russia’s slow-motion effort to expand its territory will conclude. Among observers of global strategic currents, however, there is a near-consensus that the Asia-Pacific will have a decisive, increasing impact on global order; the United States should bear in mind that judgment as it crafts its foreign policy. More generally, in dealing with ISIL, Russia and other flashpoints that will inevitably arise, the United States must prevent the obligations of crisis management from overwhelming the possibilities for strategic vision.

Encouragingly, Deputy Secretary of Defense Robert Work told an audience at the Council on Foreign Relations late last month that “we are seeking a posture in Asia . . . that is geographically dispersed, operationally resilient [and] politically sustainable, with an aim of maintaining peace and prosperity in one of the most important regions in the world, and regardless of the level of our budget, that will go forward.” Here is to hoping that the administration and its successors continue according singular priority to the Asia-Pacific.

Ali Wyne is a contributing analyst at Wikistrat and a coauthor of Lee Kuan Yew: The Grand Master’s Insights on China, the United States, and the World (2013). Follow him on Twitter: @Ali_Wyne.