Forget the South China Sea: Taiwan Could Be Asia's Next Big Security Nightmare 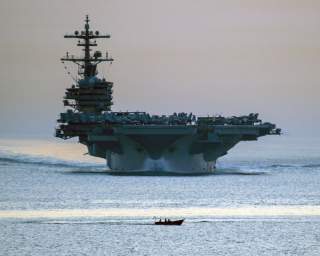 Forget the South China Sea. The results of Taiwan’s local elections last week, still reverberating in Beijing, are more likely than not to propel Taiwan’s ascension to the status of No.1 security problem in Asia over the coming two to three years.

That is one consequence of the shellacking Taiwan’s ruling KMT party took in last week’s local elections. The ruling KMT lost thirteen of twenty-two cities and counties, including the Mayoralties in Taipei (by an opposition-backed doctor) and Taichung. All told, the opposition Democratic Progressive Party took 47.5 percent of the vote to 40.7 percent garnered by the ruling KMT.

This sets the stage for the 2016 presidential elections. President Ma Ying-jeou, whose popularity was in single digits before the elections, is finishing his second term and cannot run again. So humbled was Ma that he resigned as chair of the KMT. The opposition Democratic Progressive Party (DPP), whose constitution calls for Taiwanese independence, has fuzzy positions on many key issues, but is nonetheless now well positioned for 2016.

What led to the DPP landslide? The short answer is economics. Taiwan, in the 1980s and ‘90s known as one of the four tigers (along with Hong Kong, South Korea and Singapore) symbolizing Asia’s economic dynamism, has suffered anemic GDP growth under 2 percent over the past several years.

But in Taiwan, its maturing economy has, under President Ma, become increasingly dependent on China—and associated with Ma’s cross-strait economic pacts. Ma signed several trade agreements with Beijing, opened cross-straits direct air travel, and broadly expanded economic, cultural and social ties to the mainland. With 40 percent of Taiwan’s exports going to China, China has become Taiwan’s largest trading partner. Officially, Taiwan has invested $58 billion in China, but unofficial estimates have it well over $100 billion. While there are few reliable statistics, several hundred thousand Taiwanese are estimated to live in China, most in and around the Shanghai area.

This substantial interdependence has made for stable and cordial Taipei-Beijing relations since Ma’s tenure began in 2008. After a tension-filled period of DPP rule, the contrast has been striking.

But Taiwan’s economic dependence on China at a time of slow growth and growing income inequality has sparked popular dissent, most dramatically with the youth-driven “Sunflower Movement” earlier this year, protesting a trade-in-services accord with Beijing. The popular unease in regard to China has been compounded by Beijing’s tough response to the mass pro-democracy demonstrations in Hong Kong. This has hardened an already deep-seated aversion to political talks with an increasingly authoritarian regime in China.

Recall China's President Xi Jinping told a visiting Taiwan delegation in September—in the midst of heated, confrontational Hong Kong protests—that “Peaceful unification and ‘one country, two systems’ are our guiding principles in solving the Taiwan issue.” Applying the “one country, two systems” on which Hong Kong’s relationship to Beijing is based to Taiwan is a nonstarter there. If hostility to further economic deals with China is the current mood in Taipei, there is zero interest in and no chance of political talks with Beijing, which China views as the next step in the relationship.

But it’s difficult to see Beijing accepting no further movement in their direction up to 2020. One of Xi’s first statements upon taking office in 2012 was to put down a marker on Taiwan: "Looking further ahead, the issue of political disagreements that exist between the two sides must reach a final resolution, step by step, and these issues cannot be passed on from generation to generation."

Even if the DPP did not have a call for independence in its constitution, Beijing would be nervous, if not up in arms. With the Communist Party’s priority of recovering sovereignty, Taiwan is at the top of the list, well above uninhabited rocks in the East and South China Seas.

One mitigating factor is that in recent years, China has engaged in a quiet dialogue with the DPP. Yet as I discovered during a trip to Taiwan some months ago, the DPP’s stance on China remains unclear. The current stability in cross-strait relations is based on what is known as the 1992 consensus. This is the formula of “One Country, two interpretations.” But whether the DPP would accept that formulation is unknown and many observers suspect it is dubious.

Thus, distrust remains, and moreover, even if the DPP doesn’t win the presidency in 2016, there is substantial China fatigue across the board in Taiwanese society. It is difficult to envision the next “step” in Xi’s “step-by-step” formulation.

Expect to see Beijing sabre-rattling and cross-strait tensions rising in the run-up to Taipei’s 2016 presidential elections, and don’t be surprised if that is followed by a new cross-straits crisis.

For most of the past two decades as the Chinese military has ramped up its modernization efforts, the object of its planning and military procurement has been a Taiwan scenario. Its submarines, anti-ship missiles, its entire anti-access strategy of asymmetric warfare is designed to complicate and add layers of risk at every level to forward-deployed U.S. forces in East Asia.

Yet the overwhelming priority for Xi Jinping and the Communist Party is to successfully implement difficult, radical, market-centered economic reforms needed to change China’s economic model from export-oriented to consumer-oriented. If the reforms do not succeed, they know the CCP will lose the “mandate of heaven”—what perceived legitimacy it has. But the other source of its legitimacy is claiming the mantle of nationalism, restoring sovereignty lost during the “two centuries of humiliation.”

How will Beijing handle the tension between these two pulls in opposite directions? The question ahead is whether China is willing to accept the current cross-strait status quo—the best it can get post-2016—and defer on the Taiwan question, or whether the mix of popular nationalism and new military capabilities driving much of the South China Sea assertiveness will be refocused on its original target, Taiwan. As the saying goes, may you live in interesting times.

Robert Manning is a senior fellow of the Brent Scowcroft Center for International Security at the Atlantic Council and its Strategic Foresight Initiative. He served as a senior counselor to the UnderSecretary of State for Global Affairs from 2001 to 2004, on the US Department of State Policy Planning Staff from 2004 to 2008, and on the National Intelligence Council (NIC) Strategic Futures Group, 2008-2012. You can follow him on Twitter:@Rmanning4.