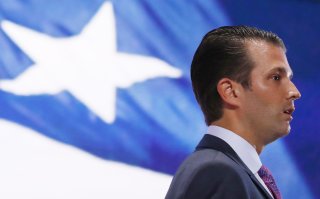 The irony here is that Donald Trump has probably been tougher on Russia than Barack Obama was.

Ham-handed efforts at forming a joint cybersecurity unit aside, Trump has requested more funds for an American military buildup in eastern Europe. He’s bombed a Syrian air base where Russian soldiers had been stationed mere hours prior. He’s repeatedly gone tit-for-tat with Iranian and Assadist proxies of Moscow in Syria, drawing warnings from many (including myself) that he was risking a great-powers war. He’s maintained control over Russian compounds in America that were seized by the Obama administration. He’s made it known that Crimea was “taken” by Russia and that the United States expects it to be returned.

Yet here we are again, staring at fresh allegations of White House coziness with Russia, a paradoxical relationship if ever there was one. Over now to Donald Trump Jr., last seen backtracking out the White House door after a meeting he attended last summer with Russian attorney Natalia Veselnitskaya was exposed in the press. The president’s son claimed back in March that he’d never met with any Russians as a representative of the Trump campaign. That was later contradicted by the New York Times, which reported that he’d huddled with Veselnitskaya after she promised him dirt on Hillary Clinton. He then asserted that the meeting was all about Russian adoption in America, a pet cause of Veselnitskaya’s. Except subsequent emails obtained by the Times showed that Trump Jr. was promised evidence that would “incriminate Hillary and her dealings with Russia and would be very useful to your father.”

So cue the screeching U-turn, the “pants on fire” rating from the fact-checkers—and the story goes well beyond those traditionally Trumpian peccadilloes. The emails obtained by the Times show that the intermediary who set up the meeting, a Trump family friend named Rob Goldstone, expressly told Trump Jr. that Veselnitskaya was expected to provide “obviously very high level and sensitive information” that “is part of Russia and its government’s support for Mr. Trump.” Trump Jr. then replied: “If it’s what you say I love it.” That’s pretty damning. And even if you dismiss the Times as a professionally dissembling legionnaire in the implacably anti-Trump media, Trump’s son himself released a chain of the emails on Twitter in which Goldstone referred to Veselnitskaya as a “Russian government attorney.” It should have been a blazing red flag, yet Trump fils went ahead and met with her anyway.

Tonight’s episode of Hannity is going to be a doozy.

Now for the caveats: Veselnitskaya has denied that she was acting on behalf of the Russian government, and that very well may be the case. No information of value was reportedly exchanged during the meeting, which Trump Jr. insists turned into a pretext for Veselnitskaya to ramble on about adoption issues. It is not a crime to meet with Russian officials during a presidential campaign, despite what Washington’s increasingly fetid town criers seem to think. The Trump paterfamilias doesn’t seem to have known that his son’s meeting was taking place. And skepticism over the press’s endless extrapolations from the emails is warranted, given the sheer volume of anti-Russian stories that have turned out not to be true, from the power-plant hack that wasn’t a hack to CNN’s major retraction last month.

But let’s also not mince words: this is the most damaging development yet for the Trump administration, made to reek all the more by Trump Jr.’s repeated misleading statements. Yet politically speaking, is that really going to matter? The Trump White House and the media have formed such rigid battle lines against each other, with thundering cannonades and skirmishing a constant, that even this may not be enough to sway anyone in either direction. Trump’s supporters will see the scandal as just another broadside by a terminally dishonest press. Trump’s opponents will continue to behave as though their country is under Kremlin occupation.

The serious issues at the heart of Robert Mueller’s Russia investigation, which require patient probing and application of the law, have been lost on this acrid battlefield. And now the revelations about Trump Jr. are only going to exacerbate both sides’ worst tendencies. For Trump defenders, that’s the reflex to excuse any and all documented wrongdoing by the president as a liberal media conspiracy, or to single out allegedly worse things that leftists have done. For Trump haters, it’s their insistence on delegitimizing the presidency, and using the Russia story to shift agency for Trump’s election away from the voters and onto the Kremlin, allowing them to overlook the failures of liberalism that actually did catalyze the 2016 backlash.

It’s the former who have gone quiet right now, but the latter should also proceed with caution. Whatever Trump Jr. did (and he must be held responsible for it), the numerous causes of Trump’s election—rage at elites, policy failures, weariness over Middle Eastern wars, wariness over deindustrialization, opioids, recession, Twitter’s influence over our discourse—cannot be reduced to some hacked emails and a fruitless klatch with a Russian lawyer. Just a thought.

In the meantime, the Trump family’s trials in both the legal system and the press now have a very real evidence bag. At the very least, the president’s son and advisors are guilty of monumental recklessness.