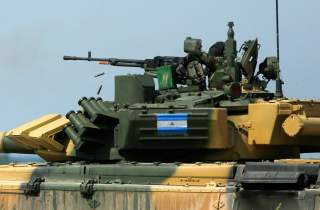 As the crisis in Venezuela continues, certain states that have supported the Maduro government may be looking for more stable partners. For the Russian Federation, its new crown jewel in the Western Hemisphere, nowadays at least, is Nicaragua.

Managua and Moscow enjoy cordial diplomatic relations, with recent high-profile meetings. Just this past September, Gustavo Porras, president of the National Assembly, met with Sergey Zheleznyak, a member of the State Duma, who was visiting the Central American state.

Additionally, Russia has sold military platforms to Nicaragua in recent years, like fifty T-72 battle tanks last year, among other heavy platforms. While it is true that Managua has not spent billions of dollars on Russian military platforms like Venezuela, such sales help promote defense relations. In fact, Moscow’s military training center “Marshall Gregory Zhukov,” located in the headquarters of the Nicaraguan Army’s mechanized infantry brigade, opened in 2013, a move that has fortified the two countries’ defense relations beyond weapon sales. Moreover, Russia and Nicaragua may hold small-scale exercises soon, as an undetermined number of Russian airborne troops visited the country in April to discuss this possibility. President Daniel Ortega justified his government’s relations with Moscow on September 1 during the Nicaraguan military’s anniversary celebrations. He stated that upon his 2006 electoral victory, he approached Washington and Moscow for help to replace obsolete military equipment and that Russia responded.

A final example of bilateral relations is a monitoring center in Nejapa, outside Managua, that Russia has constructed as part of the GLONASS satellite system. Said facilities were inaugurated in April.

As to what the future may hold for the Managua-Moscow relationship, it is important to point out that President Ortega was re-elected, again, in November 2016 for a five-year term—he’s been in power since 2007. At seventy-one years of age, it will be interesting to see what happens after his new term is over, though it is worth mentioning that First Lady Rosario Murillo is now vice president, and an Ortega dynasty may be in the making (an ironic development, considering that it was Ortega who put an end to the Somoza dynasty).

As for where Russia falls in Nicaragua’s foreign policy, in recent years President Ortega has approached various governments for aid. After all, it was not long ago that the obscure Chinese HKND Group was attempting to construct a transoceanic canal through Nicaragua. While it is generally assumed that said entity is somehow tied to Beijing, it is worth noting that Nicaragua has relations with Taiwan, not the People’s Republic of China.

So what benefits come from a Russia-Nicaragua relationship? Russia would gain an ally and be able to project influence past its near abroad. Decades ago, Cuba was Moscow’s closest ally in the Western Hemisphere. A decade ago, it was Venezuela. Now, Russia’s most stable and closest friend in the region is arguably Nicaragua.

As for the Nicaragua,  while its foreign policy strategy is likely influenced by the Cold War-era, Ortega-Moscow relationship, it is not his sole motivator. The president aims to remain in power (in 2015 his government passed a law allowing for indefinite re-elections) and to cement his legacy, exemplified by the transoceanic canal, which means cozying up to various global powers for aid, not just Moscow.

The great geopolitical game is a truly a game of musical chairs, and it is now Nicaragua’s turn to be Russia’s chosen one in the Western Hemisphere.

W. Alejandro Sanchez is an analyst that focuses on geopolitical and defense related affairs, with a focus on the Western Hemisphere. His analyses have appeared in numerous refereed journals including Small Wars and Insurgencies, Defence Studies, the Journal of Slavic Military Studies, European Security, Studies in Conflict and Terrorism and Perspectivas. Follow him on twitter: @W_Alex_Sanchez.