France's Mighty Mistrals to Russia: Why One Is Enough 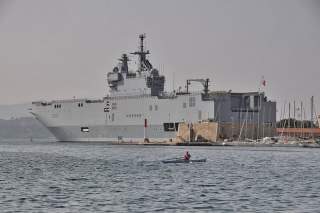 Russia’s purchase from France of two Mistral Class amphibious ships in 2011—its first ever acquisition of a major weapons system from a member of NATO—was met with loud choruses of both jeers and cheers by Western political leaders and security analysts. Some believed Russia would use the new ships to threaten its European neighbors, while others thought they would help promote greater Russia-NATO cooperation and global security. Recent events in Ukraine demonstrate those leery of Russian intentions were right to be concerned. While France is planning to deliver the first ship to Russia this fall, Western nations should ensure that the second Mistral remains in non-Russian hands.

Naval analysts classify Mistral as an amphibious transport dock (LPD), suggesting that it can deliver payloads ashore from the air or the sea. Its large flight deck is designed to be populated by an air group of sixteen multipurpose helicopters. While these helicopters would normally carry troops ashore, they could also specialize in airborne surveillance, surface or even antisubmarine warfare. The flight deck supports an array of armed unmanned aerial vehicles (UAVs), while the large flooded well deck can launch hovercraft or landing barges capable of ferrying scores of tanks or armored vehicles ashore in addition to several hundred Russian Naval Infantry.

On the other hand, the French vessel also has a formidable floating hospital with several emergency operating rooms and berthing spaces so spacious and plush, they are compared by Russian sailors to living in a dacha. Mistral’s communications suite is similarly impressive. These features make it the perfect vehicle to provide humanitarian assistance, disaster relief and noncombatant evacuations from distressed areas. Simply stated, these ships can do an enormous amount of either bad or good.

The most immediate oppositional response to the purchase came from nations on seacoasts close to Russia. Poland and all the Baltic states made it no secret that they felt threatened by this move. These countries remembered Admiral Vysotsky’s (Russian Navy Commander-in-Chief) comment that Mistral’s capabilities would have enabled his forces to destroy the Georgian Navy and occupy the Black Sea littoral in just forty minutes, rather than the twenty-six hours it actually took in 2008.

Some Western powers, dismissive of Cold War’s power politics, offered a more sanguine assessment. France, supported by Germany, initially touted the deal as a positive development that would enhance Russia’s status as a Western security partner—NATO’s official position in 2011. The ship would enable Russia to expand its participation in international maritime security operations against piracy and be available for disaster-relief operations. Defense contractors in Europe and the United States also noted the improved prospects for armaments trade with a new Russian market, flush with petrodollars. Further, the French painted Mistral as a mere hull, which could be stripped of all sensitive technologies before export. Again, this ship could either threaten or cooperate with NATO, which added fuel to the schizophrenic fire.

Ultimately, Russia and France settled on a deal that would deliver two 21,300 ton Mistrals a year apart, along with plans that would enable Russian shipbuilders to manufacture two more. At a total cost of 1.3bn Euros ($1.6bn), this would constitute Russia’s largest armament import since the end of the Cold War.

My assessment is that at the time of purchase, while discomfiting to many in NATO, the move did not present a direct threat to Europe. It was better understood as a reflection of Russia’s technological insecurity and incompetence coupled with a newly expanded defense-procurement budget.

When Putin returned to the presidency in 2008, he vowed to rebuild the Russian military, with a particular emphasis on restoring and reenergizing the Russian navy—which had shrunk to a shadow of its former self since the fall of the Soviet Union. Not only had the fleet shrunk, but Russia had also lost much of its capacity to build large ships, and was neither willing, nor able to commit to any project entailing large capital ships. Despite rhetorical boasts which continue until this day (Deputy Prime Minister Dmitry Rogozin announced that Russia can build its own Mistrals if France fails to deliver), the Russian leadership knew that it would either forgo capital naval ships or buy them elsewhere.

Thus, they chose a willing dance partner—France—and the Mistral deal was done in 2011. The discussion surrounding their ultimate roles, missions and home porting was at times both confusing and comical. “Now what do I do with this toy?”, the Russians were likely thinking after the deal was inked. Admiral Vysotsky’s previous comments were probably no more than rationale for his service staking claim to a larger portion of the growing defense-procurement budget. In 2011, I would evaluate Russian intentions as either confused or benign and its capabilities deficient. Little reason to worry.

This has changed dramatically with the onset of the Ukrainian crisis and the growth of the Russian military, driven by President Putin’s domestically popular call to increase Russian power, prestige and military presence around the world. His lightning annexation of Crimea and subsequent justification speech to the Russian Duma got the world’s attention in that he refused any type of partnership with the “perfidious” West. Putin and other Russian leaders unabashedly accused the West of interfering in its sphere of influence and dishonorably breaking a string of post–Cold War agreements and commitments.

At the same time, European and American leadership were issuing warnings to the Kremlin about interference in Ukraine, 400 Russian sailors arrived at the French STX shipyard in Saint Nazaire to take control of the first ship, Vladivostok. The French concluded that despite Russia’s military endeavors, the ship would be delivered this fall, as previously planned. France noted that the agreement between the two nations is a business contract which cannot be abrogated at this point.

The second ship, Sevastopol, will be ready to deliver in 2015, and President Hollande appears willing to take global opinion into account in deciding whether or not to deliver the vessel to Russia.

Speculation about the ships’ ultimate homeports, which had been ongoing for years, seems to have ended. It now appears that they will land in their namesake cities after appropriate infrastructure to berth and support them has been built. Ukraine (as well as Japan), in addition to all other Black Sea nations, took special note. Sevastopol would thus be the likely candidate to become the flagship of the Black Sea Fleet and in this capacity to act as command center for any Russian naval operation—to include amphibious assault—in the region. Additionally, she would be well positioned to serve as a command ship for the recently revived Russian permanent task force in the Mediterranean Sea. With Putin’s hardline comments still reverberating, there is little reason to believe that Mistral’s principal missions will be in support of international maritime security.

Western security experts have floated numerous logical proposals to steer these vessels to friendlier destinations. These include subsidized purchases by the European Union (under the European Defense Agency), NATO, France, Poland and even the United Kingdom. However, the billion-dollar bottom line made all these ideas unworkable until not long ago.

Putin’s actions may ultimately dictate whether or not France delivers the second ship (I assume that Vladivostok is essentially Russian property). His positioning of troops on the Ukrainian border continues to rankle Western leadership and is helping to build pressure on the Hollande administration to withhold delivery. A Russian invasion of Ukraine would likely push the West past its breaking point. However, the American-led West would be right not to cede this initiative to Russia.

Russia continues to increase its annual defense budget—rivaling that of China—despite the great pressure this places on the Russian economy. Its shipbuilding industry is finally delivering frigates and submarines to the Russian Navy. The addition of large amphibious ships may have seemed innocuous even a year ago, but the unpredictability and irrationality with which Putin played his hand in Ukraine suggests a need for worst-case analysis. His curt reply to French reporters that “I can assure you that if we buy something, we will use it wherever we want” should be reason enough to find a way to thwart the delivery of the second ship.

The upward ratcheting of sanctions should include a plan for some Western institution or nation to take ownership of Sevastopol, and for France to be duly compensated. A recent Economist editorial mirrors this conclusion: “The world needs to face the danger Mr. Putin poses. If it does not stand up to him today, worse will follow.”

Tom Fedyszyn is the Director of the Europe-Russia Studies Group at the U.S. Naval War College, Newport R.I.