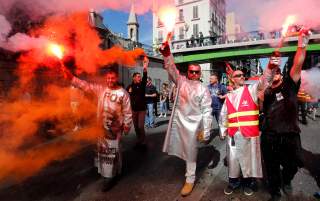 France’s streets have filled again with indignant workers and their sympathizers. It happens frequently, each time, in fact, that France tries to reform its debilitating and inequitable labor laws. The theater and rhetoric this time has followed the pattern of the past as well. Those resisting reform claim a need to protect French workers from rapacious capitalism. It is, as ever, a false message. The fact is that the laws protect only a minority of French workers, not at the expense of the capitalists, but rather at the expense of most other French workers, who, because of these laws, cannot find permanent employment or any work at all. Those in the streets, whether they know it or not, are fighting to protect privilege. It is a sad picture of a nation seemingly determined to harm itself.

The rhetoric and slogans disguise little. The elaborate labor laws that the protesters want so much to preserve hurt the French economy and the French people in two basic ways. First, by protecting established workers from dismissal, even for incompetence, the regulations have given French employers every incentive to limit full-time staff. And so today, as a direct consequence of the rules, millions of French workers—and a majority of the younger workers—earn their living on part-time and short-term work contracts instead of as full-time employees. Second, by limiting the latitude firms have to adjust work schedules and tasks, the rules have stymied the flexibility of French business, making it less competitive and discouraging expansion generally, including of payrolls. In other words, because established workers have convinced government to tailor work rules to their convenience and protect their jobs no matter how poorly they perform, others find themselves excluded from any career or paid employment altogether. The bosses may lose out, but not nearly as thoroughly as other workers, not that those workers with sinecure seem to care.

Certainly, the statistics verify this abusive picture. While those with the choice jobs cannot even lose them for cause, French unemployment has remained high for years. It has crept down recently but still exceeds 9.5 percent of the country’s workforce. Youth unemployment sits at a staggering high level approaching 25 percent. Lest the proponents of the system seek to blame something outside of France for all this hardship, it is noteworthy that in Germany, where labor-market reform went into effect years ago, unemployment runs at about 3.8 percent of the workforce and youth unemployment stands at about 6.5 percent. In the United Kingdom, which never had such debilitating rules, these two figures equal 4.5 percent and 11.8 percent respectively. At the same time, the ill effects of these laws on French competitiveness and expansion have kept overall employment growth there to less than half a percent a year over the past five years and overall French economic growth to a paltry 1.4 percent a year.

Suffering also are those established employees who work hard and effectively. Because they carry the burden of a payroll that cannot rid itself of ineffective workers—and because the labor laws have discouraged the kind of expansion that would otherwise bring more equipment and systems into the production process—French labor productivity has remained all but stagnant. In fact, labor productivity has grown a meager 0.5 percent a year during these last five years, according to the Organization for Economic Development and Cooperation. And because business cannot afford to raise real wages any faster than worker productivity, real wages in France, even for established workers, have hardly increased at all. Nominal wages have expanded 1.2 percent a year, which, after inflation, about matches the disappointing rate of productivity growth.

It is passing “strange” then that so many young Frenchmen and Frenchwomen have joined the protests. They, after all, have suffered most from these inequitable and abusive laws. Perhaps it is a theatrical impulse that draws these poor people out to support those who have gained so much at their expense. Perhaps it is a cynical hope that somehow they will someday join the ranks of the established workers and also enjoy protections and benefits at the expense of other Frenchmen and Frenchwomen. Perhaps is it the romance of revolutionary action against established power that has long held a place in French imaginations. To be sure, it is easy to see why the French people would want to attack the political establishment. It has, after all, promulgated this abusive labor regime and, even when seeing the error of its ways, has shown cowardice in the face of opposition. But if the political establishment deserves disdain in this, then so do the privileged workers who have benefited at the nation’s expense.

France’s twisted labor laws, to be sure, cannot account for all the country’s political-economic problems. Much more is going on. But if France wants to return to growth and full employment, like Germany, the UK, Scandinavia and the United States, reform of these unfair and dysfunctional rules is a necessary step. It is easy to understand why established workers resist. They continue to benefit greatly from these rules. What is difficult to understand is why so many others in France have joined this privileged group’s effort to prolong the abuse and why this nation seems so determined to wound itself.