Is Free Speech Being Crushed by the U.S.-China Confrontation? 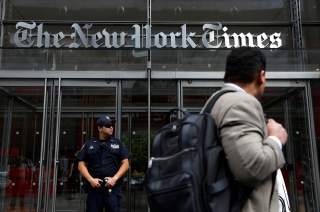 Support for democracy and freedom of speech has been one of the core values in the United States for decades. Public figures, such as actors and athletes, have played an indispensable role in upholding these values by bringing public attention to issues of social injustice and spreading those values overseas in the form of soft power. As an example, Turkish NBA player Enes Kanter recently shared his own personal story of enduring authoritarian suppression of the Turkish people by its own government on Twitter.

Yet despite the fact that citizens often look up to public figures and celebrities as paragons championing the advancement of social justice domestically and internationally, we have recently witnessed a series of events in which celebrities engage in a different sort of behavior. These instances of self-censorship and denigrating pro-democratic values, when combined, could harm core democratic values that America cherishes.

The most prominent case that comes to mind is the recent incident surrounding LeBron James. Commenting on the recent tweet by Houston Rockets’ General Manager Daryl Morey in support of the democratic movement in Hong Kong, James mentioned that he thinks Morey “was either misinformed or not really educated on the situation.” There has been much discussion on why LeBron’s off-handed comments were problematic, but the most critical issue here is that LeBron was trying to use his status as a basketball luminary to criticize and attempt to silence the freedom of speech of another individual. LeBron’s actions here undermine our freedom of speech.

The tone and content of LeBron’s comments though are peculiar, in that they were made nearly after the initial firestorm between the NBA and China has cooled off. In the interim, the NBA leadership has spoken in support of Morey’s right to freedom of speech. The NBA’s defiance in the face of China’s demand for an apology ultimately forced Beijing to backtrack their demand, which is notable, given how the NBA must have known the possible costs of losing Chinese viewership due to a retaliatory broadcast ban. Moreover, punitive actions could have incurred disadvantages on the Chinese side in ongoing U.S.-Sino trade negotiations.

If the dispute between NBA and China had calmed down, why then did LeBron come out in public and make a statement that could easily be interpreted as supportive of the Chinese position? Such a reaction not only ran counter to his actions of activism—ranging from supporting the Black Lives Matter movement and speaking out against police violence, to establishing numerous NGOs for public causes. Considering that LeBron had ample time to contemplate his response, the logical explanations might be that he was concerned about the negative repercussions for not showing his deference to the Chinese government on issues they care about. As LeBron mentioned in the interview, “…so many people could have been harmed, not only financially but physically, emotionally, spiritually…we do have freedom of speech, it can be a lot of negative that comes with it.”

One cannot help but wonder: what motivates a person to shift from being a prominent social activist to behaving like a Chinese mouthpiece tamping down freedom of speech? How do we make sense of this?

Rest assured, this is not the first time that U.S. civilians and commercial entities cave to Chinese pressure. Over the past several years, China has made use of its economic capabilities and sizeable market to silence criticism from foreign individuals and companies, forcing them to conform to Chinese ideologies and standards. For example, out of fear of retaliation, numerous Western companies—including Marriott hotels, Coach and several major airlines— have succumbed to the demands of changing Taiwan into “Taiwan, a province of China” on their websites. In LeBron’s case, Chinese pressure has morphed into something larger: it can now emasculate the freedom of speech and democratic values of the American society by having the latter’s own citizens engage in self-censoring behavior.

In political science, scholars use the term “sharp power” to describe this phenomenon and the ways that autocracies can undermine American values. Instead of relying on traditional military might to gain influence over foreign countries and their citizens, China can attempt to “[limit] free expression, spreading confusion, and distorting the political environment within democracies.” In practice, authoritarian countries can benefit from the asymmetry between free and unfree political systems. In other words, they can both limit free expression in their own countries and, at the same time, distort the political environment in foreign democracies. The successful implementation of sharp power contributes to what we saw in LeBron’s reaction: as opposed to being a citizen of a free democracy, someone who should uphold the freedom of speech, he now decides to not only self-censored himself but also his peers—to the benefit of an authoritarian country.

We are beginning to see a worrying trend: citizens and even celebrities in the United States feel pressured to self-censor, comply with undemocratic ideas propagandized by a foreign authorization government, suppress pro-democratic values and sow confusion among the public. Moreover, the fact that LeBron was willing to self-censor unprompted, without an overt Chinese demand or request, is both horrifying and a testament to the effects that sharp power can have on Western individuals and companies.