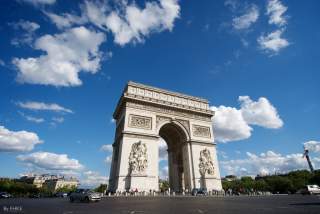 The only point of agreement between French voters in Sunday’s presidential election was that much needed to change. Their country, one of the tent poles of the European Union, had been shaken by everything from economic insecurity to the fallout of Brexit to terrorist attacks, culminating in last week’s machine-gun murder of a police officer on the iconic Champs-Élysées by an Islamist terrorist. The appetite for radical overhaul has at times seemed bottomless: “Everything has to be rebuilt,” one farmer recently told Euro News.

This was an election where even the Europhile centrist, Emmanuel Macron, upbraided the establishment and pledged a revolution for France’s economy. His bête noire, nationalist Marine Le Pen, thundered against mass immigration and Islam, with promises to cordon off French civic life for the native French. François Fillon of the center-right Republicans has promised to fire half a million civil servants. Meanwhile, Jean-Luc Mélenchon, the far-left soapbox fixture, has said that he would jettison the Fifth Republic entirely and chisel out a new social contract. The true ruling establishment, not Macron but the center-left Socialist Party which controls the National Assembly and the presidency, saw its candidate, Benoit Hamon, languish in single digits.

Which form of radicalism would prevail? The official exit poll, commissioned by the French networks and disclosed after voting had finished, confirmed the expectations of most observers, with Macron finishing first but well short of a majority and Le Pen in second, which would set up a runoff election between them. Immediately after it was released, the socialist left began coagulating around Macron, with prompt endorsements from Hamon, current president François Hollande and other powerful socialists. The center-right Fillon was soon to follow, saying his “duty was to vote against” Le Pen. The political class had circled its wagons.

That elastic club did not include Mélenchon, who hadn’t backed Macron as of late Sunday night and also hadn’t accepted the exit poll results. During a press conference he declared, “It will not be the result that was announced. . . . Of course, until then, the oligarchs will be elated.” Alas, the rapacious masters of the universe made off with the crown jewels once again, as the actual results ended up mirroring the exit poll. Geographically, Macron prevailed by winning the French west and the suburbs of Paris, Le Pen hauled in France’s deindustrialized northeast, Fillon took the districts around the Sarthe river near where he grew up, and Mélenchon eked out victories in many of the overseas territories.

French pollsters thus acquitted themselves far better than their American and British counterparts, which should give Washington’s data-political complex something to buzz about for the next couple days. So on to the runoff, scheduled for May 7, with the most felicitous results possible in hand. Macron versus Le Pen will be the clearest expression yet of the West’s incipient political realignment, not left versus right—this is the first runoff in the history of the Fifth Republic that won’t feature either the Socialists or the Republicans—but internationalists versus nationalists, elites versus populists, and, perhaps most consequentially, European integrationists versus Euroskeptics.

President Marine Le Pen ejecting France from the European Union was always an unlikely scenario, given that her National Front party controls only four federal legislative seats and excising EU membership from the French constitution would require parliamentary consent. But the EU is about much more than just a head count—it’s an ideology unto itself, with “ever-closer union” elevated to the level of dogma and “nationalist” spat with the pejorative force of “heretic” and “infidel.” A Le Pen victory in France would represent a fifty-thousand-kilojoule repudiation of everything European elites stand for. Populism would enter the Élysée Palace; the EU could no longer portray it as a freak fever quarantined to continent’s edge. Le Pen would be elevated from her current European Parliament seat into the European Council, which includes all the member nations’ heads of state. The EU can ignore the vituperations of Poland’s hostile government, but the leadership of France, a founding nation, can’t be so easily spurned. Concerns also abound over a domino effect, as the next Italian election looms and Italy’s populist Five Star Movement watches for cues.

France’s runoff will thus be the most important election of 2017. Can Le Pen prevail? The odds are long. An Ipsos poll released before the counting was even complete found her losing a one-on-one match against Macron 62 percent to 38 percent. If she’s to bridge that margin, she needs at least three things to happen. First, from Macron, there must be a gaffe or snafu or just general complacency, something that will dwindle voters’ already-shaky faith in his leadership capacities. Second, Fillon’s conservative supporters, roughly one fifth of the electorate, must buck his call to back Macron and instead embark on a Cruz-to-Trump-style migration towards Le Pen. Third, Mélenchon’s battalion of left-wing diehards must refuse to back Macron, a former Rothschild banker, and abstain from the runoff.

That third condition is more likely than you might think: an Ifop poll from earlier this month found that 42 percent of Mélenchon supporters wouldn’t participate in round two if their candidate wasn’t included. But Fillon’s endorsement of Macron makes it difficult to contemplate a center-right surge behind Le Pen, and Macron’s talents and energies means he isn’t about to just check out of the race. France will probably rally to defeat Le Pen, just as it did her father in the 2002 runoff. But following the shocks of Trump and Brexit, does anyone really want to bet the future of Europe on it?

Image: A car zips past the Arc de Triomphe in Paris. Flickr