A Frozen War in Russia's Backyard Heats Up 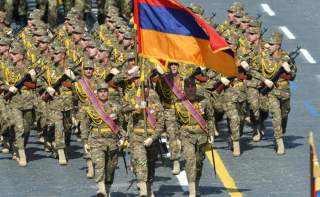 More than two months ago, an escalation in the Azerbaijan-Karabakh conflict without precedent since 1994 occurred in Nagorno-Karabakh. From the night of April 1 to April 2, combat operations continued until April 5, having begun in two parts of the contact line between the Nagorno-Karabakh Defense Army and the Azerbaijani Armed Forces. On that day, the parties agreed to an armistice, signed in Moscow. The four-day war answered many questions regarding military balance, while posing new ones. Since the threat of another escalation is not excluded, it makes sense to analyze the condition of the armed forces of Armenia, the Nagorno-Karabakh Republic and Azerbaijan, taking into account the results of the short but bloody April war. But first, we must talk about the early history of the Azerbaijan-Karabakh conflict.

Roots of the Conflict: The Early Twentieth Century

Bloody collisions occurred between Armenians and Azerbaijanis twice at the beginning of the twentieth century: from 1905 to 1907 and from 1918 to 1920. During those years, after the end of the First World War, the Soviet Union was taking shape. During this process, in 1921 the territory of Nagorno-Karabakh, approximately 90 percent of its population Armenians who practiced the Christian religion, was allocated to the Azerbaijan Soviet Socialist Republic. Some years later the Nagorno-Karabakh Autonomous Region (NKAR) was created, and was deprived of any direct land connection with the Armenian SSR.

During the years of the USSR’s decay in the late 1980s, a reunification movement arose in Nagorno-Karabakh and Armenia. It was fueled by the policy of pushing Armenians out of the NKAR; by 1989, the share of the Armenian population in the NKAR was down to 76.9 percent. Additionally, in 1988 the local Muslim population in the Azerbaijani city of Sumgait implemented the most brutal programs regarding the Armenian population, at which the Soviet leadership completely lost control over the processes underway. The NKAR declared its independency from Azerbaijan, resulting in the outbreak of war in 1991. The war continued until May 12, 1994, when three parties—Armenia, the Nagorno-Karabakh Republic and Azerbaijan—signed a provisional cease-fire agreement. The Armenians gained victory in this war, having established control over the NKAR and the territories around it by renewing the land connection with Armenia.

Upon signing the armistice, the parties led negotiations within the framework of the OSCE Minsk Group. However, this process did not yield any actual results. In recent years, violations of the state of cease-fire and constant losses from both sides have become regular occurrences.

As a result, in April 2016, Azerbaijan attempted to resolve the conflict through military means. About one hundred men from the Armenian side, and more than one hundred from the Azerbaijani side, died during these four days (despite the fact that Azerbaijan officially recognized thirty-one losses, only fifty dead bodies were found on Armenian territory, and the opposition media counted more than one hundred killed persons, some neutral media even spoke of some three to eight hundred casualties). A significant quantity of armor was destroyed, and villages near the border met with significant harm.

As for the results, Azerbaijan was able to move forward three to four kilometers in two directions during the first day, because of the suddenness of attack and the posting of a detachment of special forces in the village of Talysh. However, from the moment the Nagorno-Karabakh Defense Army began its full-scale military operation, the attackers’ successes withered. The detachment of special forces was almost completely annihilated in Talshyn, together with its commander, and some of the lost positions were forcibly retaken. By the time the armistice was signed, Azerbaijan was able to occupy several hills, with an overall area of about eight hundred hectares. Nevertheless, there are no signs of serious success—any attempt at blitzkrieg had no real chance, and by the second day, the war already had the character of a bloody stalemate, with dozens of people dying to advance or retreat by one hundred meters.

The Existing Balance of Forces Will Not Allow Azerbaijan to Attack

Before the conflict, the media often advanced the opinion that Azerbaijan, having purchased billions of dollars in arms from Israel, Russia, Ukraine and Turkey, could tilt the balance in its favor. Azerbaijani officials said they would be able to retake Nagorno-Karabakh by force in the space of one or two weeks. Nevertheless, as we have already said above, any attempted blitzkrieg had no chance in April. Let us see what existing balance of forces we are left with.

All parties are armed with a “classic” rifle for post-Soviet countries: different series of Kalashnikov guns. The special detachments also have some Western models of arms—for example, Azerbaijan has purchased a number of Israeli assault rifles TAR-21. The variety of sniper rifles is great; almost all basic Western and Russian models appear. As for antitank means, both parties have a large number of antitank missile systems of Soviet and Russian manufacture, and Azerbaijan has also purchased modern Israeli Spike systems, which proved their quality during the four-day war. As for Armenia, the country was able to purchase some number of Franco-German Milan antitank missile systems by an unknown supplier. Both parties to the conflict are armed with hundreds of man-portable “Igla” air defense systems.

As for armor, here Azerbaijan possesses a qualitative advantage, having purchased a large batch of armaments in Russia: Baku has obtained approximately one hundred modern T-90C tanks and one hundred BMP-3 mechanized infantry combat vehicles. That said, altogether the parties have approximately four hundred tanks each; in the case of Armenia these are generally Soviet T-72Bs. The situation is similar with regard to conventional artillery—but, to tell the truth, it is almost impossible to count the exact number of armaments: a great number are located in Nagorno-Karabakh, where much information is classified. However, Azerbaijan has eighteen “Msta-C” self-propelled 152-millimeter howitzers.

Today, Azerbaijan has obtained the most sensible advantage in the field of heavy multiple-launch rocket systems (MLRS). The country has thirty “Smerch” three-hundred-millimeter MLRS that are able to fire at a distance of up to ninety kilometers, and eighteen TOC-1A “Solntsepyok” reactive flamethrower systems . There is some information about Azerbaijan’s contract with Turkey for the delivery of three-hundred-millimeter Kasirga MLRS.

As for Armenia, regarding heavy MLRS, today the country has, according to different sources, four to eight Chinese WM-80 systems that fire at a distance of up to 120 kilometers, as well as, according to some sources, six Chinese copies of the “Smerch” AR1A. However, this difference will be soon nullified: Armenia has ordered a number of “Smerch” MLRS and TOC-1A “Solntsepyok” units from Russia.

It is interesting that Armenia and Nagorno-Karabakh were able to obtain a sensible advantage in the field of ballistic missiles. Armenian soldiers are armed with a significant number of “Tochka-U” Tactical Ballistic Missile Systems (SS-21 Scarab A according to NATO classification) that can fire at a distance of up to 120 kilometers. Besides, Armenians have at least eight R-17 launchers (SS-1c Scud B according to NATO classification) with thirty-two missiles that are able to fly to any target in Azerbaijan; its maximum launching range is three hundred kilometers.

Let us now look at the potential enemies’ air forces. In spite of the visible and serious advantages of Azerbaijan, the parties are nearly equal here. And that is because both have powerful antiaircraft defense systems, preventing the use of aviation in the conflict. This was partially confirmed by the four-day war—almost at once, Azerbaijan lost one Mi-24G attack helicopter (two, according to Armenian sources), after which aircraft did not participate in the conflict at all.

Armenia’s antiaircraft defense system is armed at least with six battalions of S-300 air-defense missile systems (ADMS—NATO reporting name SA-10 Grumble). This is a huge number for a country with relatively little territory. Azerbaijan also has S-300s and other antiaircraft defense systems that are almost impossible to be suppressed by the Soviet Su-25 attack aircraft and  MiG-29 fighters that the parties own.

In spite of some qualitative advantage, as we see, it is impossible to say that Azerbaijan has any overwhelming dominance. Assuming that it will attack, and that Armenia continuously fortifies its positions and constructs new fortifications, a war will be very difficult and long without any breakthroughs, which will make it senseless for Baku. Besides, taking into account the existence of the serious long-range MLRS and ballistic missiles of the enemy, there is a high risk of the destruction of large settlements and infrastructure, including gas and oil facilities. It is almost impossible to forecast the results of the stalemate, somewhat similar to the First World War.