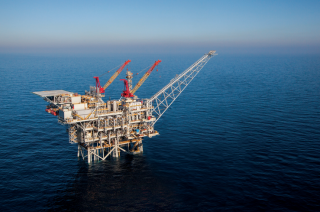 In October of last year, Russia, Israel and Cyprus conducted a joint naval exercise in waters of the Eastern Mediterranean. Though scheduled well in advance, the timing of the drill could not have been more opportune for Cyprus; the Barbaros, a Turkish seismic vessel dispatched by Ankara in order to survey the sea floor for hydrocarbons, had just entered the bitterly contested Exclusive Economic Zone (EEZ) between the two countries.

The affair triggered a flurry of diplomatic action. Israel called on Turkey to respect Cyprus’ right to explore for natural gas within its maritime boundaries, and Cyprus insisted that the vessel immediately withdraw. Not surprisingly, President Erdogan rebuffed these demands, and avowed that the Barbaros would remain at sea until a distribution deal was reached for the riches beneath.

This tense affair is representative of the new developments that have caused a shift in traditional regional patterns of enmity and amity between the Eastern Mediterranean’s primary actors: Israel, Egypt, Cyprus, Greece and Turkey, which began with the rapid deterioration in Turkish-Israeli relations after the 2010 Mavi Marmara incident. Despite bilateral attempts (and limited American mediation) for reconciliation, the two countries are still far from realigned. Although Israel has demonstrated the willingness to normalize the relationship, Turkey’s foreign policy seems to systematically exacerbate the problem. Its blatant, emotional and nondiplomatic stance against any Israeli policy toward the Palestinians has left little room for a healthy reconciliation process. Anti-Semitic rhetoric coming out of the pro-AKP media has only made matters worse.

Another development was the collapse of Turkish-Egyptian relations, following the Egyptian military’s ouster of President Mohammed Morsi. For the AKP, which felt a political and ideological bond with the Muslim Brotherhood, the Egyptian military’s coup brought back painful memories of historical events in Turkey. As a result, Turkey adopted a contentious stance toward Egypt’s new president, General Abdel Fattah al-Sisi, leading to a severing of diplomatic ties.

Other significant developments that fall within the same geopolitical context include the long-standing Turkey-Cyprus and Turkey-Greece (NATO members since 1952) disputes over a host of issues such as the Cyprus problem and the Aegean maritime zones, respectively. These historically troubled relationships have become even more complicated with the introduction of hydrocarbons in the region in 2011. After Israel, Cyprus discovered its own natural-gas reserves in its Exclusive Economic Zone (EEZ), which, unsurprisingly, is contested by both Turkey and the Turkish Republic of Northern Cyprus (recognized only by Turkey), which controls 37 percent of the island. Turkey has repeatedly threatened Cyprus with military action if it ever tries to exploit its natural resources. In October 2014, Ankara illegally issued a NAVTEX order, thereby reserving areas in RoC’s EEZ for seismic surveys that are meant to discover natural resources. It then dispatched the Barbaros, a seismic vessel, accompanied by Turkish warships into the Cypriot EEZ in order to collect data. Last month, Erdogan pledged that the Barbaros would not leave until a deal was struck.

Greece is faced with a similar maritime dispute with Turkey over shared rights in the Aegean Sea. Turkey considers portions of the disputed Aegean Sea “grey areas” and maintains that any unilateral effort from Greece to expand its maritime zones constitutes a casus belli (cause for war). Despite various efforts between Greece and Turkey to normalize ties, discussions remain focused on low politics (e.g. economy, tourism, energy) and avoid the fundamental, but infinitely more sensitive issues. In light of these realities and the rising opportunities for trilateral energy cooperation with Israel, Greece and Cyprus have made a strategic pivot toward Israel. Through preliminary energy agreements with Israel and Cyprus, Egypt has also joined this game, at least indirectly.

Thus, two distinct but overlapping partnerships have emerged: Israel-Cyprus-Greece and Egypt-Cyprus-Greece. As this suggests, Cyprus and Israel are key states in both these partnerships, primarily because of the pivotal role they play as rising energy producers. In order to evaluate the Eastern Mediterranean’s future, the motivations, challenges and perspectives of these two countries on the evolving balance of power must be explored.

Israel’s foreign policy has always prided itself on caution and a pro-Western agenda. Political instability in the Eastern Mediterranean over the last five years has only affirmed this strategy in the eyes of Jerusalem’s decision makers, gas or no gas. But the discovery of hydrocarbons has created an opportunity for increasing regional economic integration, and Israel hopes that initial deals with Jordan, Egypt and the Palestinian Authority will serve to solidify those diplomatic ties.

Landing a deal with Egypt is paramount for both countries, whose relations have seen a noticeable uptick since the ouster of Mohamed Morsi. Containing radical Islam is the foundation upon which Jerusalem and Cairo have found common ground. During last summer’s war in Gaza, Israel relied heavily on Egyptian mediation in order to reach a settlement with Hamas. But a natural-gas deal would also provide a welcome diversification of the relationship, and an economic boost, utilizing Egypt’s stagnant LNG plants.

However Israel’s dream scenario is to export gas to Europe. There are multiple reasons for this, most notably because Europe is Israel’s biggest trade partner, yet bilateral relations are increasingly strained over the Israeli-Palestinian conflict. A gas pipeline to Europe would be a crucial addition to this historic relationship. For many years, it was believed that Turkey was the most affordable route to the European market—Turkey’s ambitions as a regional energy hub are no secret—but the rapid deterioration of ties since the 2010 Gaza flotilla affair, including Turkey’s seemingly partisan support for Hamas over the Palestinian Authority, has proven difficult to overcome. As tempting as a gas deal through Turkey may be, it has not proven compelling enough for Jerusalem and Ankara to bury the hatchet.

This has opened the door for Cyprus and Greece. From Israel’s perspective, partnering with these countries would be beneficial in numerous ways. For example, Cyprus and Greece are not only EU member states, but they also maintain positive relations with Russia. In a region where U.S. influence is waning, keeping Moscow satisfied is an imperative. Additionally, partnering with these countries simply makes good economic sense. Energy cooperation with Cyprus, which possesses large hydrocarbon fields in the Eastern Mediterranean as well, is financially profitable for both parties. It almost seemed natural for the two to sign an EEZ delineation agreement in 2011. While there are no guarantees the proposed pipeline will work, Israel’s actions reflect a desire to enhance this partnership, regardless.

From a Cypriot perspective, there is a necessity for participating in newly formed regional alliances for various reasons, including security. The multilevel agreements Cyprus has signed with Israel, Greece and Egypt, address a number of issues such as trade and tourism, while energy cooperation is a central element in Cyprus’ partnerships. Cyprus had already been cooperating with Israel and Greece on such sectors as electrical energy and crisis management, but 2014 witnessed a serious expansion of relations.

Indeed, Turkey’s foreign-policy behavior has largely been the driver behind the shifting balance of power in the region. Specifically, Turkey’s threats against Cyprus’ energy-related activities added to the pre-existing perceptions of Turkey as an aggressor, which stem from its contentious history on the island. In this context, the Cyprus-Egypt-Greece and Cyprus-Greece-Israel partnerships also render Cyprus a part of a broader regional alliance that provides (indirect) diplomatic, political and security support to Cyprus vis-à-vis Turkey, in addition to collective benefits in multiple sectors.

For Cyprus, the formation of these partnerships is unquestionably a positive development. It is perhaps the only time in its history that Cyprus has played such an important role in regional politics and security. However, Cyprus cannot and should not rely entirely on these partnerships, as they are vulnerable to multiple obstacles and geopolitical risks. Ideally, it will work with its partners against the odds in order to improve the economic development, energy cooperation and regional stability of the region.

Economic opportunities heralded by the discovery of hydrocarbons are the primary reason why Israel, Greece, Cyprus and Egypt are enjoying closer ties. Still, these dynamics have also been forged by each country’s ongoing disputes with Turkey, who remains a critical actor in the Eastern Mediterranean. Turkey could be an equal party in this process of economic integration, but has yet to display the necessary flexibility to reach a settlement with any of the abovementioned states.

There also remain many outstanding questions about Egypt’s stability. While al-Sisi appears firmly in control, investors in long-term energy contracts require the kind of guarantees that may be difficult for him to deliver. The political, social and economic transition that Egypt is experiencing will remain a concern for all of its regional partners, and has the potential to negatively impact the status quo.

Challenges to these new regional relations remain, but the motivation to profit off the sea’s resources should provide—at least in the short term—the foundation for dynamic, cooperative alliances. For the United States, it is a chance to play mediator between multiple cultural, religious and ethnic civilizations without having to don the cap of global police officer, and perhaps ensure the vitality of these ties beyond the hydrocarbon expiration date.