The Future of the U.S. Marine Corps 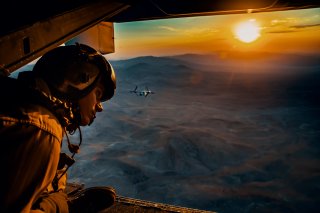 --Divestment of all the tanks in the Marine Corps, such capability “to be provided by the U.S. Army.”

--Divestment of three of the current eight heavy-lift helicopter squadrons, which would still “satisfy our requirements as described in approved naval concepts”;

--Divestment of “at least” two of the current seven light attack helicopter squadrons, since current levels are “operationally unsuitable for maritime challenges and excess to our needs with the divestment of three infantry battalions”;

--Assessing the need for the F-35 aircraft, particularly in light of continued pilot shortfalls in “recruiting, training and retention as well as fiscal and industrial base factors”;

--Assessing all ground tactical vehicle programs in order to adjust them downward in light of the reduction of three infantry battalions.

Depending on how limited one views the future responsibilities of the Marine Corps, this plan is erected on a fragile house of cards: that future Marine Corps operational commitments should be shaped by the reduction of front-line infantry battalions, whose casualties in any sustained engagement would quickly require replacements that may not be available if the battlespace expands; by subjecting Marine Corps commitments to the needs of the Navy; and by an unproved reliance on the augmentation of combat units such as aviation assets and tanks from other services that may not be available and who will not have trained with the Marine Corps.

The proposal was based on extensive wargaming, in which the new Commandant has great confidence. But it is axiomatic that experimental war games (like staff studies) can be biased through subtle control of the methodology decided upon by those who design the war game. There is no greater danger in military strategy than shaping a nation’s force structure to respond to one specific set of contingencies, giving an adversary the ability to adjust and adapt beforehand. Nor would it serve the country’s long-term interests for the Marine Corps to careen from two decades of overemphasis in the Middle East to a fixation with narrow naval scenarios in places like the South China Sea.

If history teaches us anything in combat it is that the war you get is rarely the war that you game. As former heavyweight champion, Mike Tyson once put it, “Everyone has a plan until they get punched in the mouth.” In World War I the Germans were convinced they would defeat France in exactly forty-two days. Prior to World War II the French matched this folly by building a string of fortresses along the Maginot Line, leaving open the thickly forested Ardennes, which their war planners decided was impenetrable by a large-scale German attack. In 1941 the British were convinced that no military assault could overcome its shoreline defenses against an attack on their naval base in Singapore, then known as the unassailable “Gibraltar of Asia.” The Japanese army landed far to the north, then bicycled and marched its way down the Malayan Peninsula, attacking Singapore from behind and quickly smashing the stunned British and Australian defenders. Except for General Tomoyuki Yamashita the Japanese high command was not usually that brilliant. Its pre-war plan of fixed defenses on island redoubts throughout Pacific Asia backfired spectacularly, and their inability to adapt after their unexpectedly quick victories at the beginning of the war allowed American resilience and control over the sea and the air to destroy their gains.

None of these debacles were the result of a failure in new technologies. All were the failure of faulty planning and especially of the miscalculations of those at the highest levels of command.

Our present-day Marine Corps serves as the nation’s pre-eminent expeditionary force, deployable immediately in any scenario short of nuclear war. But before World War I the role of the Marine Corps was narrowly defined to shipboard duties, small “landing party” operations, and the protection of diplomatic legations ashore. Despite its well-earned reputation in those roles, from its founding in 1775 until World War I, total Marine Corps casualties in all of our country’s wars amounted to only 332 Marines killed in action. Marines were truly “soldiers of the sea,” an important but surrogate element of the Navy itself.

World War I changed that. The Marines quickly stood up two hardened and undefeatable regiments. During six months of heavy fighting they endured 2,457 killed in action and 12,379 total casualties, earning the revered title of “Devil Dogs” from their German opponents. Their discipline, unmatchable marksmanship and ability to adapt and innovate on the battlefield also earned them a larger role among America’s combat arms, from which has come a remarkable series of forward-looking contributions to our military and to our national security. But this evolution was not an easy one. The mid-twentieth century was marked with repeated efforts by competing services and politicians to either do away with the Marine Corps or to put it back inside the Navy box.

The Marine Corps first broke out of that box through its development of amphibious warfare doctrine during the 1930s after an intricate study of the ill-fated 1915 British landings and ground campaign at Gallipoli. The leaders of that period tested, trained and wrote the book on large-scale amphibious landings. During the island campaigns of World War II they demonstrated the Corps’ historic combination of leadership, discipline, and command accountability. But although the Marine Corps perfected the techniques of modern-day amphibious warfare, they did not own the concept. In fact, the largest U.S. amphibious operations in history, in Sicily and on D-Day at Normandy, were not conducted by the Marine Corps at all.

The most important evolution of the Marine Corps in our national security posture has been as an immediately deployable, fully capable expeditionary force, with an included mission of amphibious assault. And this has usually required “sustained land operations.”

When North Korea suddenly attacked South Korea in June 25, 1950, Gen. Douglas MacArthur asked immediately for the Marines, not simply because they had amphibious capabilities but because he knew that whatever it took, they would be ready. By September 15 the Marines had called up thousands of World War II veterans, formed an invasion force, deployed aboard ship, crossed the Pacific and landed at Inchon. The Inchon landing was one of the most technically difficult maneuvers in American history, subject to fluctuating sea tides and well behind enemy lines. Inchon was followed by more than two years of sustained land operations, including the most memorable engagement of the Korean War, the First Marine Division’s breakout from the Chosin Reservoir against vastly superior odds after the Chinese army crossed the Yalu River and surrounded them.

During and after the Korean War, Marine Corps innovation developed and perfected techniques of close air support and helicopter doctrine. During the late 1950s its leadership overcame intense opposition in order to retain fixed-wing aircraft so that the Corps could continue to field a fully capable, homogeneous force that could deploy immediately whenever called upon to do so, with every necessary combat component intact. This effort paid off in Vietnam with the quality of Marine Corps close-air support, a skill perfected only by continuous air-ground training.

In Vietnam the Corps fielded two full divisions and part of a third in sustained land operations, engaging a determined enemy for six years of hard combat that took the lives of fourteen thousand Marines and brought more than one hundred thousand total casualties. In the 1980’s they operated for more than a year in Beirut, Lebanon. They were among the first on the ground during Desert Storm, and again in Afghanistan and then again in Iraq. Such sustained operations as a highly integrated combat force, available to the country’s leadership on demand, has become an inseparable part of the modern Marine Corps tradition.

History tells us that in the future there will be other engagements in other places, sometimes littoral, sometimes not. If so, the Marine Corps that will be called upon to respond will be bringing with them only the weapon systems, logistics, technologies and people that our top leaders are now deciding to fund and to build and to train.

What will such a commitment look like? Where will it be? Will it involve “sustained land operations” rather than a “one and done” smack-down launched and quickly recovered by Navy ships? What kind of notice will our Marines have before being sent into harm’s way? What will be the size of that commitment⁠—a company, a battalion, a regiment, perhaps a division⁠—and over what expanse? Will it be urban or rural, or maybe in the mountains? How long will it last? Will there be adequate helicopter and other assets to insert, relocate, provide fire support, resupply and sustain the Marines, weapons systems, and logistical necessities required even to begin such an unanticipated call to duty? With such drastic “divestments” as those now proposed, will there be enough infantry Marines in the pipeline to replace and sustain the casualty flow and weapons replacements from battalions that are committed, not simply on the first day or the first week but over a much longer period, perhaps under conditions where our aviation assets and other mechanical systems are shot down, or crash, or wear out from such environmental erosions as heat, ice, sand, clay dust, monsoon rains, or the simple wear-and-tear of constant operations?