The Future of U.S. Military Doctrine Will Be Decided by Technology 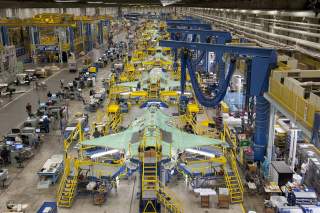 Doctrine is an Army’s game plan. Doctrine not only tells an Army how to fight but also communicates intent to the fighting forces from those in the institutional Army who are the gatekeepers of ideas. The progression that leads to doctrine stretches across a temporal “reverse highway” that begins well into the future with a vision of how future wars will be fought. At some point along the highway visioning solidifies into warfighting concepts. All too often the concept phase of this journey is where dead ends and misleading road signs appear. Visioning is cheap and ephemeral. Concepts, on the other hand, ossify ideas and turn them into opinions. Opinions, even false ones, are defended by those whose influences are at stake. Opinions lead to investments that launch programs. Eventually, the highway ends at the doctrinal present, as organizations and weapons emerge to provide the tools and formations to fight our wars.

The length of the temporal highway depends on how quickly technological variables affect battlefield dynamics. During the agricultural age, the pace of change was measured in generations. The musket and field gun of Gustavus Adolphus’s seventeenth-century army was little changed from the weapons used by European armies in the mid-nineteenth century. The pace of societal innovation in the late nineteenth century accelerated technological change by an order of magnitude. A veteran of the late Civil War battles would have recognized the horrors of trench warfare on the Western Front in World War I. But he would have been mystified by the technologies that caused the slaughter: the machine gun, small bore rifle, quick firing, long-range artillery and aircraft.

The past century gave us two catastrophic world wars and a Cold War that ended bloodlessly. But the bloodshed of the world wars was, in large measure, induced by military theorists who failed to adequately navigate the temporal highway from visioning to concepts to doctrine. The story of the failure of military theory from World War I to the present is a torturous one filled with false detours and misread signs that still confound theorists today. It is necessary to retrace our travels down that past, painful highway because we are returning again to the prospect of fighting big, catastrophic wars—with the United States and Western Europe facing off against Russia or China.

The failure of first world armies to get visioning and concepts right was due in large measure to a failure to anticipate the eternal duality of ground warfare: the shifting balance between firepower and maneuver induced primarily by the accelerated pace of technological change. In the eighties, I witnessed how the pendulum of shifting dualities altered the course of battle when Gen. Jack Woodmansee, then V Corps Commander, asked me to lead a series of staff rides in France—one to the Battle of the Somme fought in 1916 and the other to Sedan fought in 1940. The immutable tenet of war states that firepower favors the defensive and maneuver favors the offensive. Technologies that matured decades prior to the First World War swung the pendulum toward firepower by extending the tactical and operational killing zone an order of magnitude. Unfortunately, the technologies of the industrial revolution did nothing to accelerate the speed of maneuver. It remained in 1916 as it had been since the days of the legion: at a walking pace. This tragic misreading of the firepower-maneuver duality cost the British Army twenty-four thousand dead in a single day at the Somme.

Fast forward a generation. During our second staff ride we paused to gaze from the heights of La Marfee—a commanding vertical mass that dominated the Meuse River crossing sites at Sedan. Experience in battles like the Somme and Verdun convinced the French to put their faith in firepower and holding the defensive. Had they been right the overwhelming mass of French artillery scattered across the heights could have easily stopped the Germans at the river’s edge. But French visionaries and conceptualizers had failed to anticipate that, in a mere twenty years since the Great War, the internal combustion engine and wireless technologies had shifted the duality of war from fire to maneuver, from the defensive to the offensive. The speed of the German advance overwhelmed the ability of the French command to comprehend that the speed of maneuver had increased from a walk to twenty miles per hour. France lost the Battle of France in six days.

The Battle of France signaled the pendulum’s swing toward maneuver and the offensive. Later in the war the Soviet Union and the United States would borrow blitzkrieg doctrine from the Wehrmacht and apply it on a heretofore unimaginable scale. From the Oder to Berlin, from the Rhine to the Elbe, both mechanized armies raced at unprecedented speeds toward each other. In the midst of these triumphant times neither army could have foreseen that the end of the European war marked the pendulum’s apogee. It was then that the pendulum began reversing—it continues its countervailing path to this day.

A confluence of circumstances has restored dominance of the defensive. The greatest single influencer has been technology. Former Deputy Secretary of Defense Robert Work has characterized this transformational period as the “second offset.” Work’s thesis contends that the United States has sought to avoid matching an enemy’s advantage in mass by seeking technological “offsets” that allow a smaller force to prevail against a larger one. The first offset begun during the Eisenhower administration focusing on nuclear weapons as a means to cancel Soviet superiority in conventional forces.

The second offset, begun after Vietnam, sought to develop conventional technologies to achieve the same objective. The subsequent surge in technological innovation was enormously decisive. Sometime during the Reagan administration, the Soviets realized that unprecedented advances in American killing power—expressed as range, lethality and precision—doomed their dreams of crushing NATO in a blitzkrieg-like invasion across the Inter German Border. The second “conventional” offset was responsible to some degree for accelerating the decline and fall of the Soviet Empire.

But the second offset was flawed in that it favored only one dimension: firepower, delivered principally from the air. Technology favored air power because the transformative weapons of the period were most effective when delivered from the air. The aerial second offset began symbolically with the bombing of the Hua Gia bridge in North Vietnam in the spring of 1972. The bridge had withstood thousands of dumb bombs before it collapsed when struck by four laser-guided bombs. The path toward firepower dominance from the air continued with the development of GPS guided bombs and cluster munitions—these increased the lethality of aerial ordnance enormously. Stealth arrived in time for Desert Storm, and the effectiveness of F-117 fighters over Baghdad ended the debate over the worth of radar evading technologies. More recently, the exploitation of unmanned aircraft and the inclusion of cyber weapons as part of our air service’s arsenal has made American aerial killing power unmatched on the planet.

The U.S. Army’s contribution to the second offset was the realization that the ground and aerial domains of war needed to be merged into a single cohesive fighting doctrine: AirLand Battle. The doctrine contained two brilliantly conceived ideas for defeating a larger enemy by a firepower intensive force. First, was the imperative to destroy armored formations at a rate faster than the Soviets could “present” them at the forward battle area. Gen. Donn Starry, commander of V Corps in Europe and later “father” of AirLand Battle doctrine, once recalled the “I Love Lucy” candy-stuffing scene as evidence of the problem. Lucy could only keep up if she and Ethel stuffed the boxes all along the conveyor belt rather than at the point where the candies fell off the end. Thus, the secret of AirLand Battle was to attack very deep all across three maneuver echelons of the Soviet offensive. Only tactical and operational aircraft and long-range missiles could range deep enough to kill the Russians in depth.

The second imperative of AirLand Battle was to slow or even culminate the Russian advance using maneuver forces supported by land and air delivered firepower. War games conducted at Ft. Leavenworth in the early eighties revealed that tracking and sensing technologies of the time were unable to kill moving targets. If the Russians could be slowed or even halted, the killing power of supporting arms would be magnified considerably, enough perhaps to halt the Russians before reaching the Rhine. At the time no one in the Army seriously considered AirLand Battle as an inclusive doctrine for both offensive and defensive maneuver: it was intended solely for battle along the German border. The development of AirLand Battle was significant because, for the first time in the annals of American military history, a doctrine, an idea, was responsible for deterring war. AirLand Battle was equally transformational in that, also for the first time, an idea was powerful enough to break the constrictions of service vanities to interconnect two separate domains, air and land.

AirLand Battle’s greatest shortcoming, however, was that its effectiveness in Desert Storm (and later on the march to Baghdad in 2003) convinced doctrine makers that the doctrine was suitable for offensive as well as defensive warfare. The doctrine’s success also seemed to validate the long-term efficacy of weapons used in the execution of AirLand Battle: The M-1 Tank, Bradley Fighting Vehicle and the Multiple Launch Rocket System. Again, these were false takeaways. As a new brigadier general, I headed the team that wrote “Certain Victory”—the Army’s official history of Desert Storm in 1991. Our research revealed that Schwarzkopf’s hundred-hour left hook across the sands of Iraq and Kuwait was indeed magnificent. But it moved only slightly faster than Patton’s march across France or even Guderian’s march from Amiens to the English Channel. This cautionary tale is important because lessons drawn from battles against incompetent enemies should always be treated as suspect.