The Future of Warfare is Irregular 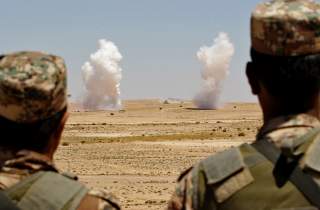 AMONG THE Trump administration’s most significant national security decisions has been the shift from counterterrorism to inter-state competition. The United States is increasingly engaging in global rivalry with “revisionist” states like China, Russia, Iran and North Korea. To do this well, some U.S. policymakers have argued that the United States needs to develop capabilities to fight—and win—conventional and possibly even nuclear wars against these states if deterrence fails. As the National Defense Strategy argues, “The surest way to prevent war is to be prepared to win one. Doing so requires a competitive approach to force development and a consistent, multiyear investment to restore warfighting readiness and field a lethal force.”

While there are good reasons to focus U.S. national security on balancing against global and regional state adversaries, it would be a mistake to assume that most future conflict will be conventional or even nuclear. It won’t. The United States remains the world’s preponderant military power. For Russia, Iran, North Korea and even China, conventional or nuclear war with the United States would be risky and prohibitively costly. What’s more, America’s struggles in Afghanistan and Iraq suggest that the U.S. military is vulnerable when faced with adversaries that resort to irregular strategies, operations and tactics.

These realities suggest that competition between the United States and its main adversaries will likely be irregular—not conventional. Russia will likely continue to focus on a suite of overt and covert actions, from supporting state and nonstate proxies in Syria, Ukraine and potentially the Baltics to information warfare. Iran will attempt to expand its power through proxies in Lebanon, Syria, Iraq, Yemen, Afghanistan and Bahrain—not by amassing a more potent army, navy or air force capable of fighting conventional battles against the United States. China is already spreading its influence in the Pacific by utilizing economic coercion, conducting a sophisticated information campaign, and resorting to fishing vessels and other “grey zone” tactics to lay claim to islands. Even North Korea will likely continue to develop its special operations and cyber capabilities.

The future of conflict means that the United States needs to prepare to compete with these states not primarily with divisions, aircraft carriers and strategic bombers—but by, with, and through state and nonstate proxies, cyber tools, and overt and covert information campaigns. At the moment, however, the United States is ill-prepared for irregular competition.

WHILE THE United States needs to prepare for the possibility of conventional and nuclear war, neither will likely be the primary means of competition for at least two reasons.

First, the United States remains the dominant global military power. Its defense budget is still larger than the defense budgets of the next eleven countries in the world combined. More importantly, the United States’ land, air, naval, space and cyber capabilities are formidable. For Russia, Iran, North Korea and even China, conventional or nuclear war with the United States would be risky. The gap between the United States and China, in particular, is narrowing. Beijing is developing more accurate, long-range missiles; integrated air defense; fourth-generation fighter aircraft; enhanced naval power projection; more advanced space and counterspace capabilities; and nuclear forces, including a new generation solid-propellant intercontinental ballistic missile, the df-41. But U.S. military capabilities surpass those of its competitors.

Second, the costs of conventional and nuclear war are likely to be staggering. Over the past several years, the U.S. government and think tanks have conducted numerous wargames and analyses of conflicts with Russia in the Baltics, China in the Taiwan Straits and South China Sea, Iran in the Middle East and North Korea on the Korean Peninsula. The results are generally bleak. Most conclude that war could lead to tens or hundreds of thousands of dead soldiers and civilians, domestic unrest, billions of dollars in economic damages, a global economic downturn and the potential collapse of long-held alliances. In addition, these conflicts might escalate to nuclear war, raising the number of dead to millions of civilians, create far-reaching environmental destruction and trigger unthinkable global financial costs.

A U.S. war with China could reduce China’s gross domestic product (GDP) by between 25 and 35 percent and the American GDP by between 5 and 10 percent, according to a rand report. As the report concluded:

A long and severe war could ravage China’s economy, stall its hard-earned development, and cause widespread hardship and dislocation. Such economic damage could in turn aggravate political turmoil and embolden separatists in China.

Both the United States and China would also suffer huge numbers of military and civilian deaths and risk large-scale destruction of their military forces. If war expanded to include their allies, economic and casualty figures would skyrocket even further.

Wargames that involve a conflict between NATO and Russia, including scenarios with Russian forces invading one or more Baltic countries, often escalate to include the threat—or use—of tactical nuclear weapons. Even a conventional war in the region could led to substantial destruction. If one or both sides used nuclear weapons, the number of casualties would be virtually unthinkable.

These costs and risks will likely give Washington, Moscow, Beijing, Tehran and even Pyongyang pause. During the Cold War, Moscow and Washington confronted a similar bleak reality, which meant that most competition was irregular.

THE COLD War offers a useful historical lens to assess the risks of conventional and nuclear war between major powers. NATO planners prepared for a possible Soviet and Warsaw Pact invasion of Western Europe. The United States and other NATO countries deployed forces close to the intra-German and Czech-German border to stop Warsaw Pact forces from conducting an armored blitzkrieg into West Germany. NATO also planned for nuclear war, limited or otherwise. The United States amassed a vast nuclear arsenal and adopted strategies like mutually assured destruction (MAD), which assumed that a full-scale use of nuclear weapons by two or more opposing sides would cause the annihilation of both the attacker and the defender.

The threat of such heavy costs deterred conflict, despite some close calls. During the 1962 Cuban Missile Crisis, the United States and Soviet Union nearly went to war after a U.S. U-2 aircraft took pictures of Soviet medium-range and intermediate-range ballistic missiles (MRBMs and IRBMs) under construction in Cuba. But Washington and Moscow ultimately assessed that direct conflict was too costly. Deterrence held.

Instead, the United States and Soviet Union engaged in intense security competition at the irregular level across Latin America, Africa, Asia and Europe. Both countries backed nonstate groups and states to expand their power and influence. Under the Reagan Doctrine, for example, the United States provided overt and covert assistance to anti-Communist governments and resistance movements to roll back Communist supporters across the globe. For its part, Moscow adopted an aggressive, irregular approach best captured in the Russian phrase aktivnyye meropriatia, or “active measures.” It involved overt and covert actions designed to influence populations across the globe, from Europe and Asia to Latin America and Africa. The kgb conducted disinformation campaigns using forgeries, orchestrated political operations by recruiting or planting journalists as agents of influence, supported front organizations in the West that spread false information and lobbied in favor of pro-Soviet causes and orchestrated targeted assassinations. The Soviets used active measures as an offensive instrument of foreign policy to extend Moscow’s influence and undermine U.S. power throughout the world.

George F. Kennan argued that a significant component of U.S.-Soviet competition could be characterized by what he called “political warfare.” This type of warfare refers to the employment of military, diplomatic, intelligence and other means—short of conventional war—to achieve national objectives. As Kennan argued, the tools of irregular warfare

range from such overt actions as political alliances, economic measures (as [the Marshall Plan]), and “white” propaganda to such covert operations as clandestine support of “friendly” foreign elements, “black” psychological warfare and even encouragement of underground resistance in hostile states.

This type of irregular war was anything but “cold.” There were on average 180,000 deaths per year because of insurgencies from 1950 to 1989, or approximately seven million dead. Moscow and Washington aided rebels or governments in many of them.

Some of these capabilities are clearly necessary. But based on the high costs of conventional and nuclear war, most U.S. competition with Russia, China, North Korea and Iran will likely be irregular. The United States is vulnerable. Just look at Afghanistan, where the Taliban has fought the United States to a stalemate despite lacking the U.S.’s high-tech weapons. Instead, the Taliban—which receives some support from Pakistan, Iran and even Russia—has focused on guerrilla tactics like ambushes, raids, suicide attacks and targeted assassinations. The U.S. military has struggled against poorly-equipped insurgent groups in Iraq, Libya and Somalia, just to name a few other examples. U.S. adversaries have noticed.