The Future of Women in Afghanistan 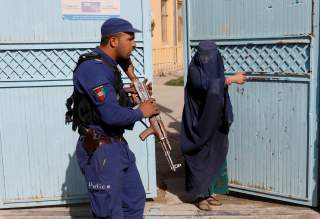 Among the important concerns that should be raised about the proposed ceasefire between the Trump administration and the Taliban—and the possible withdrawal of U.S. troops—is the future of women in Afghanistan.

There remains an unacceptable risk that without U.S. forces there to uphold U.S. interests and values, the Taliban will resume its unacceptable treatment of Afghan women. For example, Ryan Crocker, who served as ambassador to six Muslim countries including Afghanistan, argues that although women made extraordinary gains in education, business, in the legislature, and elsewhere in society, those gains are fragile and only possible if the United States defends core values, such as women’s rights. Instead, the current framework, which was reached without the involvement of the Afghan government, feels like a surrender, Crocker argues. What makes this surrender particularly grave is what is going to happen to Afghan women after we leave.

Crocker’s concerns about how women will be treated after an American withdrawal were recently echoed by several Afghani women who now hold key positions in the country, many of whom suffered horrendously when the Taliban held power in the 1990s. Not surprisingly they fear that this horrible behavior toward women will happen again if the Taliban come into power after the U.S. withdraws—even if that power only extends over parts of the country. Rahima Jami, a member of the Afghan Parliament, who was forced out of her job in 1996 when the Taliban insurgents took power and her feet were beaten by religious zealots because they were showing, is convinced that the Taliban will be even crueler than they were in the past.

These concerns bring to mind a meeting I attended in 2010 in Kabul with a Taliban official, who had been very close to Mullah Mohammad Omar, the Mujahedeen Commander who founded the Islamic Emirate of Afghanistan in 1996. I was there as part of an international delegation, put together by the Century Foundation, and our purpose was to see if we could jump-start the process to finding a political solution to what was then a decade-old war, since, at that time, President Barack Obama was in the process of withdrawing U.S. troops.

Like Ambassador Crocker and most Americans who knew how women were treated by the Taliban when they were in power, I was concerned about how they would treat women if and when they came back into government as part of a power-sharing arrangement. And so I asked the Taliban leader about that directly. His answer was that we did not have to worry because the Taliban would not treat women any worse than the Saudis.

While our group was initially shocked by his answer, the more I thought about it, the more I realized that the United States has dealt—and continues to deal—with countries like Saudi Arabia that treat women as second-class citizens to their male counterparts. At the time we met with the former Taliban leader, women in Saudi Arabia were neither allowed to vote nor drive. Four years later, the Saudis granted women the right to vote and seven years later permitted them to obtain drivers licenses without permission from their legal guardians. However, women in Saudi Arabia still need a male guardian to give approval before they can travel outside the country, get married or divorced, or even be released from prison. And while a Saudi man can have several wives, women cannot have several husbands.

In Bahrain, which is currently the home of the U.S. Fifth Fleet, women younger than forty-five still cannot go on the Hajj pilgrimage to Mecca without a male guardian.

In Egypt, a country that receives billions of dollars in U.S. aid each year, a 2013 poll of gender experts ranked it the worst for women’s rights out of all twenty-two of the Arab states. A 2015 Global Gender Gap Index, which measured disparities between men and women, ranked Egypt 136 out of 143 countries worldwide. These poor rankings largely stem from the number of women in Egypt who are victims of sexual harassment and genital mutilation.

After nearly two decades of war, the United States has a moral obligation to ensure that women in Afghanistan are not returned to the horrors of the 1990s—if and when we leave. But, we must also ensure that they are treated much better than they are in countries like Saudi Arabia, Egypt and Bahrain, and other nations like Pakistan and Indonesia with whom we have close diplomatic and security relationships. The United States should be leading efforts to press leaders in those countries to treat women equally to their male counterparts, even as it prioritizes the protection of those rights in Afghan peace negotiations.

Ultimately, it is in America’s interest to protect the gains it has made in Afghanistan—gains that have made Afghanistan more stable, prosperous, open, and equal than it was before. The norms the United States has helped to create have advanced a compelling alternative to Taliban rule that has exposed a generation to the promise of a just and equal society. The United States should be prepared to support and defend the rights of Afghan women—and Afghans more broadly—even as it considers drawing down U.S. troops. Indeed, the future of a stable and prosperous Afghanistan may depend on it.