The G7 Summit Serves Its Purpose 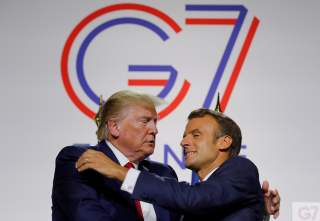 It is becoming increasingly clear that the Group of Seven (G7) no longer serves as the coordinator center for the world’s leading industrial democracies. While I would argue that the conclave continues to have value as a venue for collective and bilateral interaction among a group of important leaders, it is no closer—and arguable more distant—from any aspiration that it functions as a de facto nucleus of any sort of democratic community.

It is easy to blame to personality and quirks of President Donald Trump for this development, and it is quite true that his bluster and abrasiveness did not contribute to the smooth functioning of the meeting in Biarritz, just as in Canada the year previously. Yet it bears recalling that President Barack Obama’s decidedly more diplomatic finesse, while it might have contributed to the perception of more smoothly-running summits, could also not fill in the growing chasm among the members.

Two of the seven—the United States and Japan—believe that the West’s actions have facilitated the rise of China as a capable competitor seeking to challenge the post–Cold War order, especially in the Asia-Pacific region. These countries believe that such actions pose a direct threat to their national interests. Four of the seven—Japan, Italy, France and Germany—are looking for ways to improve relations with Russia and to find possible compromises with Moscow on its demands for revisions to the post–Cold War order as it stands in the Eurasian space. All of them are dealing with political movements in their own countries that view the economic competition with other members of the group as a greater danger than the challenge posed by the “axis of authoritarians” to the international order. Indeed, several members of the group see one of the main authoritarian challengers—China—as a guarantor of some of the existing rules that the United States hopes to modify or change.

Perhaps a President Hillary Clinton would have preserved more of the facade of unity and cooperation in Biarritz, and certainly, the United States would, in all likelihood, still be a party to the Joint Comprehensive Plan of Action with Iran, and so the arrival of the Iranian foreign minister Javad Zarif on the sidelines of the G7 would not have raised tensions as it did with members of the Trump administration delegation. Yet to not recognize that strains have been building among the G7 members independent of who occupies the White House (or the Elysee palace) would be to ignore reality.

What this meeting of the G7 failed to achieve was a workable consensus that can serve as the basis for coordinated, joint action among the members. There may be a growing recognition that the West is dealing with the consequences of a major imbalance between its economic integration with Russia and China and the security risks this imposes given Russia’s and China’s interests in revising the current global order, but no agreement on which tools of compellence and deterrence should be used. The United States, despite whatever Trump’s personal feelings on the matter may be, is increasing sanctions pressure on Russia at a time when the consensus in Europe has shifted away from imposing new penalties on Moscow and is debating a prospective softening of existing sanctions and gradually restoring the pre-2014 relationship. It is notable that Ukrainian diplomat and analyst Roman Bezsmertnyi has been publicly warning that Ukraine may have to deal with a major weakening of European sanctions on Russia come 2020. At the same time, the United States will need to decide to what extent it will impose third-party sanctions on its European and Japanese allies for their dealings with Russia.

A G7 consensus on Russia could emerge after Russia's incursion into Ukraine in 2014 because there was the prospect of improved relations with Iran. Now, an energy self-sufficient United States is placing restrictions on the ability of its allies to obtain vital sources of energy, first from Iran, then from Venezuela, and now perhaps even from Russia. While, in theory, the United States could source some of those energy needs, it does so at a higher price point and there is no political will in the United States to subsidize American energy exports to make them more attractive; it is expected that U.S. allies should purchase more U.S.-produced (and Canadian-produced) energy and to absorb any price differences as part of intra-alliance solidarity. Needless to say, Germany—one of the world's leading export economy whose surpluses sustain the European Union—is less enthusiastic about this prospect, especially given the tariffs placed on its goods by the United States on national-security grounds.

Similarly, when it comes to China, there is no basis for common action. The Trump administration is pursuing a strategy of rapid-force decoupling of the U.S. and Chinese economies, arguing that Western security is being undermined by the economic tools being delivered into Chinese hands. Japan and Canada might share similar views, but those will be much more circumspect given their own dependence on bilateral trade with Beijing. But for Europe, China’s push to revise rules in East Asia does not pose an immediate or pressing security concern. So, even before the summit, as Ash Jain noted during a talk at the Carnegie Council:

One of the strategic challenges we face is to come up with a new strategic approach to China, not just run by the United States or initiated, but very much in conjunction with our democratic allies as the community of democratic nations because a strategy with China can only succeed if it's coordinated and if it has buy-in and support from a number of other influential countries, and I think part of it has to involve decoupling, limiting, or constraining how much dependence we have in terms of our economic engagement with China.

There is skepticism about the core values of U.S. policy from both sides, says Ash Jain of the Atlantic Council, and the international order is under siege as never before. The Atlantic Council has launched an initiative aimed at revitalizing the rules-based democratic order and rebuilding bipartisan support among policymakers and the broader public.

One cannot argue that any sort of consensus has emerged from the G7 meeting. At any rate, even the possibility that the G7 might come to a more common position on China appears to have been one of the incentives for Beijing to offer to restart trade talks.

There was no joint communique or plan of action adopted at the multinational meeting. But also, no one has been willing to throw in the towel and make the case that the forum has no value. Meeting next year at the Doral golf course may not lead to major breakthroughs, but it will continue to force the national security and international economic establishments of each country to keep talking. The G7 will live to fight another day.