Game Over: Greece Surrenders to Europe 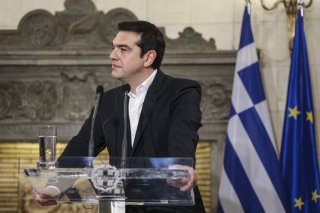 Greece has surrendered the last of its sovereignty. After a referendum widely interpreted to be a rejection of austerity, Greece has agreed to (though not enacted) even stricter reforms. The new deal heralds the final seizure of Greek rights and should frighten any nation contemplating a similar path.

Many of the reforms required by the creditors, such as lifting restrictions on pharmacy ownership, are relatively painless. But others, such as reform and stability of the pension system will be far more difficult to implement politically. Trust is lacking on both sides and must be rebuilt before either side can trust the other again.

Much like when the late Steve Jobs would say “And one more thing,” the creditors inserted four bullet points that entirely alter the tone of the document. The creditor institutions have asked for a privatization of “valuable Greek assets,” essentially creating an asset-backed government loan. This takes the form of a fund targeted to reach 50 billion euros and will be run by Greeks (the Germans were opposed to this initially and wanted to run it themselves). It will probably be filled with Greek goodies—heavily distressed state owned enterprises (SOEs). With the Greek economy in shambles, these assets will sell well below the value they would have commanded just a few years ago. Despite the understandable intentions of reducing the risk of lending more money to Greece, the creditors are likely forcing assets to be sold at fire sale prices.

The creditors went further, though. All relevant legislation will go through them. The Greek government must “consult and agree with the Institutions on all draft legislation in relevant areas.” The creditors cannot trust the Greeks, and have therefore installed a technocratic government, while maintaining the facsimile of democracy.

While Merkel is receiving much of the credit for causing the Greeks to capitulate, she was not the cause of the capitulation. Instead, Tsipras was pushed to the table by the collapsing Greek economy. By capping the emergency liquidity assistance (ELA) funds available to Greek banks, the European Central Bank (ECB) brought the Greek economy to its knees. Greek banks are shuttered and capital controls remain in place.

For a deal that likely both succeeds and fails, the Greeks lose their assets (sovereignty) and the power to legislate freely (one of the few remaining fragments of their democracy).

The creditors won. The deal succeeds in deterring other members of the monetary union from taking a similar path. No country will want to travel the same path as Greece for the same outcome. There is now precedent to confiscate hard assets, seize legislative power and use the ELA as a political weapon. Would-be bad actors are unlikely to intentionally cross these lines, lest they meet creditors’ tools of destruction.

For Greece, the deal is a mixed bag. The creditors have installed a technocratic government to be certain the deal is upheld. Voting in elections may be mandatory, but is now largely symbolic for Greeks. The reforms to be passed over the next few days by the Greek parliament will reap rewards in the long run, but will be painful in the short run. Relief from the capping of the ELA could come by the end of the week. Greece has not been an open or thriving economy in quite some time, and, as a result, the transition may take longer and economic activity may dip lower than creditors or the Greek leaders believe.

Even if the Greeks can stick to their economic program, Greece will be a problem again. The new deal, conditional on the passage of certain laws by certain dates and strict adherence to the agreement, will last for three more years. Debt relief was outright rejected in the document, despite widespread agreement that the Greek debt load is at an unsustainable level. The International Monetary Fund admitted as much in a report released following the Greek refusal of the first bailout package.

To remain afloat, the Greeks have handed over their sovereignty and the last vestige of their democracy. Witnessing the carnage of the Greek rebellion, other highly indebted European nations will likely attempt to avoid a similar outcome—keeping the Greek issue isolated. After taking a bold stance against austerity, the Tsipras government acquiesced in a loud, but peaceful, takeover.