Game of Thrones in Iraqi Kurdistan 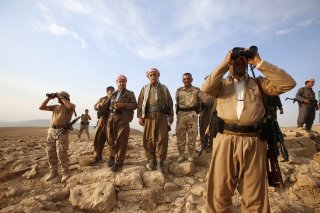 The Kurdistan Region of Iraq (KRI) is a confederacy between the Patriotic Union of Kurdistan (PUK) its rival Kurdistan Democratic Party (KDP). The PUK controls the Sulaymaniyah governorate and its surroundings. It is a quasi-state as it possesses its own diplomatic, military, and intelligence services. The KRI’s existence and stability depend on the relationship between the PUK and the KDP. However, since the absence of its charismatic leader, the PUK’s authority has disintegrated, and the party is in disarray.

Amid the chaos, Lahur Talabani emerged as the de-facto leader of the PUK with a personal politics based on hatred towards the KDP—threatening the KRI’s unity. However, in a sudden, internal maneuvering, Lahur’s cousin, Bafel Talabani, ousted him, a move Lahur called a coup orchestrated by regional powers. Nonetheless, rifts within Lahur’s entourage led to his ousting. Lahur’s media and companies were seized and he was accused of abusing his power as voiced by the political leaders and senior military commanders I spoke with. As the remaining American forces in Iraq are positioned in the KRI, a destabilized PUK would also destabilize the KRI which neither the United States nor any regional power seeks. Consequently, the United States and Iran intervened to mediate the situation.

A power struggle has ensued. The PUK has descended into anarchy and has failed to elect a leader since the absence of its leader Jalal Talabani, Bafel’s father, who died in late 2017. The party was kept together due to a balance between the different armed factions. As the party’s central authority crumbled, most of the PUK institutions deteriorated though, its core military and intelligence services endured, and they became the levers of power in the PUK.

The PUK’s elite force, the Counter-Terrorism Group (CTG), was established in 2003 with the help of the United States. It became the most popular force in PUK-administered areas, or the so-called Green Zone, named after the PUK flag color. As there was no overarching authority, the CTG and the Information Agency (IA), the party’s intelligence service, called the Dazgay Zanyari, dominated the rest of the PUK.

The CTG headquarters is located in the PUK’s political capital, Qalacholan near Sulaymaniyah, making it paramount to the control of the PUK. From the early days of the CTG, Lahur and his brother Polad were prominent figures in the CTG due to their connections to Jalal Talabani. When Lahur became director of the IA, he further integrated the CTG with the IA. Although CTG is subservient to IA, the CTG came to control the IA due to its military might and the PUK’s lack of central authority. In the long run, the CTG became a political force with its own press, media, and civilian staff.

The CTG’s emergence coincided with the war against the Islamic State in Iraq and Syria (ISIS). Despite sharing a long border with ISIS, the KRI was secure. Even though all the KRI armed forces played a role in securing the region, the CTG, especially Lahur and Polad, took most of the credit. The CTG was touted as the guardian of the Kurds as they were sent to liberate the Kurdish city of Kobani in Syria from ISIS.

Lahur became IA’s director in a shady incident in 2013, after which he began interfering in the party’s and KRI’s political affairs. Traditionally, previous directors have kept a low profile and shunned politics. A member of the PUK leadership told me that “Lahur deposed the PUK members and placed members of the IA and the CTG in their stead.”

In 2017, Lahur consolidated his power and began calling for a long-overdue party congress to elect a new PUK leader. In the Green Zone, anti-KDP sentiments are strong. Lahur’s entourage called the KDP a traitor and blamed Kurdish problems solely on the KDP. These policies further sowed seeds of distrust between the KDP and the PUK, turning the KRI into a region of opposing armed enemies. Yet Lahur maintains good relations with the United States and ostensibly distances himself from Iran. Allegedly the CTG was involved in killing Qassim Suleimani and Lahur was the only PUK leader who didn’t attend Soleimani’s funeral. However, he couldn’t centralize all power within the PUK.

Bafel Talabani was a threat to Lahur’s power because Lahur lacked what Bafel had: his father’s legitimacy. For instance, Lahur’s entourage usually claims that Lahur bears a resemblance to Jalal Talabani to validate his rule. Further, there are fundamental differences between the two. Lahur, a former business owner with little military training, built a cult of personality around himself and excludes most of the old PUK establishment. His political views were formed within the PUK security and intelligence apparatuses that led him to equate compromise with failure, making rapprochement with the KDP unimaginable. His line of politics dictates that compromise with the KDP is political suicide for Lahur.

On the other hand, Bafel represents another line of politics. He has gone through military training and joined the CTG in its early days. Bafel maintains close relations with the PUK establishment and keeps a low profile while he maintains good relations with the United States, Iran, Baghdad, and the KDP. Even though they had different world views, in the PUK’s fourth congress in 2019, a co-presidential system was adopted. Lahur managed to garner most of the votes and he and Bafel became co-presidents. Lahur’s opponents, including most of the PUK establishment, called the congress illegitimate.

Lahur marginalized a great number of PUK members. It resulted in dividing the party into two opposing factions even though Lahur controlled most of the PUK. Various figures within the PUK and the KDP refused to recognize his authority. However, Lahur’s supporters called him a reformer for bringing new people to the party.

The disenfranchised members found their refuge in Bafel even though he didn’t possess substantial power. Qubad Talabani, Bafel’s brother who serves as deputy prime minister of the KRI, once complained that mafia-like people impeded his work. Bafel and Qubad, collectively called the House of Talabani, are considered the legitimate heirs of the PUK by many. When Lahur seemed all-powerful, he was stripped of his powers.

“The reason for deposing Lahur was abuse of power,” a CTG commander said. “The IA was used for mass surveillance and attempted to poison co-president Bafel.” Later a spy working for the IA was arrested in Bafel’s home.

Lahur’s faction was ruled by fear as ideological and historical loyalties became obsolete within the PUK and he relied on the CTG and the IA to rule. A business owner in Sulaimani complained that “we experienced the same during Saddam’s dictatorial reign.” In addition, the group monopolized the market and smuggled through the PUK-Iran border.

Lahur’s faction accused Bafel of putsch and Turkey and regional powers of plotting against them. However, Turkey doesn’t possess real influence in the Green Zone despite that Ankara is happy to see Lahur ousted due to his support for the Kurdistan Workers’ Party (PKK). On the other hand, the House of Talabani has traditionally called for a united KRI that could potentially limit outside intervention.

In addition, PKK-PUK relations, which date back to the 1980s, didn’t begin with Lahur. The PUK has become a natural ally of the PKK due to its close ties with Iran and tensions with the KDP. Assisting the PKK helps the PUK to balance the KDP and halt Turkish expansion southward.

Moreover, a united and strong KRI comes with unity among the region’s security forces. Lahur’s opposition to the KDP made this impossible. A united KDP-PUK Peshmerga is the key to a powerful KRI. Even though Iran and Turkey oppose a destabilized KRI, they wouldn’t be fond of a united PUK-KDP military and Kurdistan Region Security Council (KRSC).

The IA and the CTG officially operate in the framework of the KRSC that responds to the region's presidency. Lahur isolated the IA and the CTG from KRSC, despite that the IA and CTG’s incumbent directors were approved by the KRSC. A united KRSC and Peshmerga would make the KRI stronger and could guarantee the U.S. position in Erbil while the KRI relies on the American presence to secure itself.

Furthermore, it was a rift among Lahur’s core supporters that led to his defeat, not a foreign conspiracy. A member of the CTG specified “There were serious disputes between the IA’s top advisor, Sirwan Talabani and Wahab Halabjay, former CTG head of operations . . . Lahur lent his support to Sirwan” the source added. This further politicized the CTG and the IA and brought them directly into the power struggle. When Bafel took over the headquarters of the CTG and the IA, their loyalty switched from Lahur to him. Lahur couldn’t personalize the CTG and the IA. Later Halabjay, now promoted to CTG commander, stated “his problems with Sirwan have been solved thanks to President Bafel.” This assured Bafel’s authority over the CTG and the IA.

Moreover, the CTG and the IA that led to Lahur’s collapse were already purged of any pro-KDP members under Lahur. The KDP has controlled all key positions within the KRI government due to chaos in the PUK. Therefore, the KDP won’t benefit from a centralized PUK but the existence of both the KDP and the PUK as mini-states depends on the position of the KRI that obliges both to collaborate.

For the KRI to host American forces, which Erbil relies on for its security, the KRI has to balance relations between the United States and Iran and not antagonize one at the expense of the other. Lahur’s policies threatened the KRI and American presence in the region.