Game of Thrones Meets International Relations: A Match Made In Heaven? 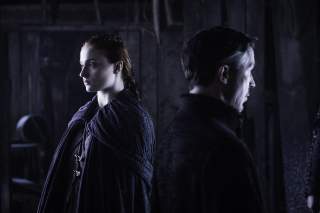 George R. R. Martin, author of the acclaimed A Song of Ice and Fire book series which has been brilliantly adapted for television as HBO’s Game of Thrones, is fond of invoking a quote by William Faulkner that, “The only thing worth writing about is the human heart in conflict with itself.” While both Thrones and its literary inspiration have done a masterful job portraying such conflict, fans of the series have been equally if not more transfixed by the external conflicts erupting around Martin’s characters. Game of Thrones’ depiction of a sprawling and intricate multiparty struggle for political and military control of the continent of Westeros has produced a depiction of war, diplomacy, and political intrigue that is as compelling as it is brutal.

While Thrones’ violence, sex, witty banter, and ice zombies have proven more than sufficient to capture the imagination of the casual television viewer, it is the show’s rich portrayal of complex political questions that has helped attract many students and practitioners of foreign policy to the series. Despite its fictional medieval setting, Game of Thrones has provided an excellent lens through which to examine theoretical debates and global problems facing contemporary international relations scholars. With Thrones about to begin its eighth and final season this Sunday, it seems fitting to look back and appreciate the series’ deft handling of the very debates that regularly play out in the pages of publications like the National Interest.

Perhaps most interesting to readers of the National Interest is Game of Thrones’ portrayal of realism in international politics. Cersei Lannister’s declaration that, “When you play the game of thrones, you win or you die. There is no middle ground,” aligns well with realism’s depiction of an anarchic, self-help international system in which survival is a state’s primary goal. The best way for a state (or a great house) to ensure its survival is to possess sufficient power to deter and defeat its rivals, and Westeros’ leaders wage war, forge alliances, and betray their ostensible allies in support of this aim.

Game of Thrones’ Tywin Lannister stands out as one of the most skilled practitioners of realist foreign policy in modern fiction. Bismarckian to his core, Tywin turned against his former Targaryen allies during Robert’s Rebellion only when it became clear that the alliance of usurpers held the upper hand in the conflict, then established an alliance with the victorious House Baratheon that maximized the Lannisters’ power and influence in Westeros. Years later, Tywin lead his house to victory in the War of the Five Kings through nimble and strategic alliance formation, successfully courting allies in the North, the Reach, and the Riverlands to help him win a two-front war against the secessionist Starks and a rival claimant to the Iron Throne in Stannis Baratheon.

Tywin’s primary goal is to maximize the power and influence of his house to ensure its long-term survival, and his decisions are based on power calculations instead of being governed by the moral laws of the universe (Exhibit A: The Red Wedding). Yet Westeros’ other rulers do not universally abide by realist precepts: for example, the Starks, Greyjoys, Baratheons, and Sand Snakes of Dorne are all driven to participate in conflicts based more on abstract ideals than rational power calculations, and traditions and norms such as guest rights and the prohibition of kinslaying constrict the strategic options of some states to their own detriment. However, the series’ purposeful contrast of Tywin Lannister’s realism with leaders who act primarily to spread universal values (justice, honor, equality) or in pursuit of individual emotional goals (vengeance, glory) encourages watchers to engage in the real-world debate regarding which of these forces does or should influence the actions of states in the international system.

Game of Thrones also shows the benefits of cooperation through international institutions, even if the conflicting self-interests of states make such cooperation difficult to achieve. Jon Snow learns this firsthand as his newly-independent Kingdom of the North, rendered something of a rogue state by abandoning the institution of the Iron Throne, struggles to persuade the leaders of rival houses to join with them in countering the threat posed by the White Walkers. If anything, Game of Thrones makes the case that international institutions require greater levels of coercive power to address existential threats such as the White Walkers, a not-so-veiled metaphor for climate change that threatens to plunge Westeros into an eternal winter. The White Walkers were introduced as the primary antagonists of the series from the opening scene, and the collective failure to address the coming crisis through the first seven seasons will likely result in devastating consequences in the final chapter, an ominous parallel to what humanity may face if climate change remains unchecked.

Game of Thrones also has much to say about the role that nuclear weapons play in influencing warfare and politics. In acquiring and raising her three dragons, Daenerys Targaryen achieves the Westeros equivalent of unchecked nuclear primacy, allowing her to strike her opponents anywhere on the map with a level of force that cannot be countered or matched by conventional means. Predictably, Daenerys’ dragons give her a significant military advantage and allow her to court allies and force political concessions with greater ease, while also raising legitimate questions as to whether such weapons ought to exist in the first place.

Equally predictable are her enemies’ responses to her dragons. The arrival of these organic WMDs on Westerosi shores initiates an arms race to develop effective countermeasures against them (see Qyburn’s scorpion) as well as a successful attempt by one of Daenerys’ rivals to acquire a dragon of his own (the Night King). Season eight will introduce viewers to a new world in which two actors have dragons at their disposal instead of one, and it seems unlikely that mutually assured destruction will deter either side from loosing dragon fire on the other.

Terrorism also rears its ugly head in the world of Game of Thrones. Like America’s victory over the Iraqi military in 2003, Daenerys’ conquest of the slave-holding city of Meereen initially appears to be a decisive victory over despotism that will create a better and more egalitarian state in its wake, with the toppling of the Harpy from the pinnacle of Meereen’s Great Pyramid mirroring the fate of Saddam Hussein’s statue in Firdos Square. However, the would-be liberators quickly come to be seen as occupiers, giving birth to a violent insurgency called the Sons of the Harpy that plunges Meereen into a chaos that evokes memories of Fallujah from the Iraq War. Questions of how America can pursue its global ambitions without making itself vulnerable to international terrorism continue to dominate the foreign policy debate, and Game of Thrones’ portrayal of this imperial dilemma rings very true to life.

Finally, Game of Thrones presents an excellent depiction of nationalism as a powerful force in international affairs. Despite being wildly unpopular after killing both the reigning queen and the Westerosi equivalent of the Pope, Cersei Lannister rallies significant support for her bid to stave off Daenerys’ conquest by portraying the invading army, composed largely of Dothraki and Unsullied warriors from across the Narrow Sea, as a foreign horde. Nationalist sentiments are also used as justifications for both the Stark and Greyjoy rebellions against the Iron Throne and are strongly embedded within the Northern opposition to the Wildling refugees that resettle south of the Wall.

Nationalism remains an influential motivating force in contemporary politics yet can often result in short-sighted policy decisions that ultimately do more harm than good to the state (such as the ongoing Brexit debacle or the various Greyjoy rebellions) or result in reactionary, nativist, and anti-immigrant sentiments best embodied by the modern resurgence of fascism in Europe. Game of Thrones presents an excellent portrayal of both the righteous power and dangerous nature of nationalism which aligns well with both historical and contemporary understandings of the phenomenon.

Game of Thrones has been rightfully celebrated as a triumph of cinematic television, but it also deserves recognition for its ability to vividly portray the complexities of international politics in ways seldom seen in mainstream productions. Although the story’s conclusion may ultimately center on how its characters resolve the conflicts within their own hearts, rest assured that season eight of Thrones will also have much to say about how conflicts are waged, resolved, and avoided in the international arena.