Is Gary Johnson This Election’s Next Crazy Plot Twist? 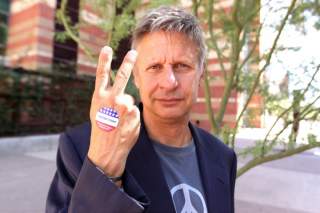 Nearly everyone agrees that this has been one of the wildest, most unpredictable presidential campaign years in memory. What’s interesting, though, is that most politicians and commentators seem to think that the unpredictability stops at the present moment. Yes, the current reasoning seems to go, nobody could foresee Donald Trump’s emergence as the GOP standard-bearer or the Bernie Sanders surge in the Democratic nomination battle. But the outlines of future events now are clear: The race will pit Trump against Hillary Clinton, with Trump continuing to shoot himself in the foot until he doesn’t have a leg to stand on. Ergo, Hillary wins.

Nice try. But let’s say, for the sake of analysis, that we haven’t seen the end of the wild political developments that have characterized the race so far. In that instance, what might emerge as a likely turn of events? How could the campaign year continue to unfold, given what we know now about the state of American politics?

First, a look at what we know now. Herewith a few irrefutable realities:

· Most Americans consider the status quo to be unsustainable and hence want change, even radical change, if it moves the country beyond the deadlock crisis spawned by the status quo.

· Large numbers of Americans consider the two major-party candidates to be distasteful—Hillary: dishonest and untrustworthy, obsessed with her own ambitions, stuck in the politics of the past; Trump: boorish, mean-spirited, erratic, lacking in fundamental human decency because he is too obsessed with himself.

· Voters want a new brand of politics, something fresh that can yield a national consensus capable of smashing the rigid politics of both major parties.

Given this, it seems likely that the Libertarian Party candidate, former New Mexico governor Gary Johnson, will emerge as a significant vote-getter. He describes himself as liberal on social issues and conservative on economic matters—and opposed to America’s obsessive foreign-policy adventurism of the past twenty years. This may not be the precise combination of issue positions favored by most Americans, but there are elements in his message that should play favorably with significant segments of the electorate. Thus he could scramble up the political fault lines that have become so frozen in recent years and piece together a new coalition of significant political energy.

For liberal Democrats, he offers relatively open borders, an expansive abortion policy, laissez faire attitudes on gay marriage and other social issues, support for the Equal Rights Amendment, acceptance of global warming, legalization of marijuana, a discomfort with the death penalty, and a sympathy for the Black Lives Matter movement. For traditional Republicans he offers free trade, low taxes, smaller government, curbs on the regulatory state, support for school choice and vouchers, and opposition to gun control. His objection to American foreign policy interventionism into the affairs of other nations could appeal to elements of both parties, as could his abhorrence of "crony capitalism" and other governmental activities that favor elites over ordinary Americans. During his eight years as New Mexico governor, he vetoed 750 bills, swayed in many instances by his perception that those bills unfairly benefitted favored citizens and groups.

Currently, Johnson is polling as high as 12 percent in presidential surveys that place him on the ballot (with presumptive Green Party candidate Jill Stein getting up to 5 percent). Johnson hit that 12 percent level in the latest Fox News poll (in a three-way match-up), and it’s notable that he has received relatively little media attention thus far. In the two most recent years of significant third-party candidacies—George Wallace’s in 1968 and Ross Perot’s in 1992—the independent candidates received far more media attention than Johnson or Stein has received this year.

That suggests there is room for growth for both candidacies—and gives rise to an analysis of just what would happen if the two upstart candidates inched up in the polls and actually stirred serious interest among voters.

Two things merit attention. First, it seems likely that the presidential winner could capture the White House with a popular vote total of no more than around 40 percent. There are four significant precedents for this. In 1860, Abraham Lincoln won the presidency in a four-man field with only 39.65 percent of the popular vote. The other examples: Woodrow Wilson’s 1912 victory with 42 percent in a three-person race; Richard Nixon’s 43.4 percent victory in the 1968 three-man contest; and Bill Clinton’s 43 percent victory in 1992, with Perot running as an independent.

Of course, it’s possible that a four-person vote split could result in no candidate getting the 270 electoral votes required for victory, in which case the race would be thrown into the House of Representatives. Then each House delegation would have one vote to cast for one of the three top electoral-vote-getters. But that hasn’t happened since the 1824 four-man contest that resulted in the controversial election of John Quincy Adams as the nation’s sixth president. For purposes of analysis, we probably shouldn’t rule it out in a wild and unpredictable year, but history tells us the greater likelihood is for a majority winner in the Electoral College based on a minority showing in the popular balloting.

But that suggests the electoral outcome becomes even more unpredictable than just about anyone has anticipated. If victory is possible with just around 40 percent in the popular vote, as happened four times before, then it seems that the dynamics of the race could turn in the favor of any of the top three candidates.

Which brings us to the second analytical framework worth considering—what might be called the "odd man out" syndrome. In any multiple-candidate race, it usually comes down to the top two, while the third drops down as the odd man out. He or she is still significant in the race, but not competitive. Conventional wisdom generally fixes on the independent candidate as the inevitable odd man out. This is understandable since in three of the four historical examples noted here, the independent candidate was indeed the one who dropped down into uncompetitive territory.

But suppose in this crazy year Donald Trump’s antics and out-of-control mouthings undercut his candidacy to such an extent that he becomes the odd man out. Or suppose Clinton gets ensnarled in an ethics scandal of such serious proportions that she drops down into uncompetitive status. Then Johnson could become competitive in the two-person battle that would ensue at the top of the race. Could he actually, in such circumstances, cadge the 40 percent or so of the popular vote that could get him the victory? Hard to imagine. But stranger things have happened in American politics—including just in the past few months.