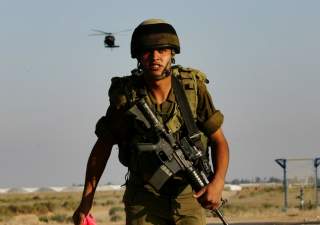 Since Gaza's "March of Return" demonstrations began March 30, news reports have highlighted protestors are burning tires and throwing stones. However, the Palestinians also have been flying fire-carrying kites across the border to ignite Israeli fields and forests. The arson attacks have prompted increasingly strong Israeli responses. Gaza's first significant rocket attacks have also accompanied them since 2014.

These exchanges are reminders the Israeli-Gaza situation is only one incident away from war. If a full-blown conflict were to erupt, recent research suggests Israel’s defenses would minimize its rocket casualties. However, Israel could not stop either the kite or rocket attacks completely, nor the financial costs they impose.

The first cargos were merely charcoal lumps, or oily rags set alight. Some kites now include burning time fuses to delay ignition until they cross the border, while others carry explosive devices instead of combustibles. Helium-filled balloons and condoms are also increasingly being used to reach farther into Israel.

By mid-June, protestors had launched more than six-hundred kites and balloons, igniting four-hundred-and-twelve crop and forest fires. No injuries have been reported, but more than 8,000 acres (twelve square miles) of farmland and forests have burned. Agricultural damage is estimated around $2 million and firefighting expenses at $550,000.

The Israeli Defense Forces (IDF) first responded by assigning drone-hobbyist soldiers to ram the kites with their radio-controlled quadcopters. The IDF says it can intercept kites within forty seconds of detection, but hundreds have still gotten through. Therefore, the IDF recently began using its electro-optical Sky Spotter systems to detect incoming kites and warn firefighters of the likely impact points.

In June, the IDF’s response intensified as its armed drones began firing warning shots near people making kites. When that failed to deter them, it started launching airstrikes on Hamas buildings and vehicles.

The Palestinians' corresponding escalation involved rocket fire. Their rockets have been mostly silent in recent years, with only seventy-five falling in Israel from 2015 to 2017. Thus, the one-hundred-eighty-eight rockets and mortar shells suddenly fired in late May provided an abrupt reminder that those weapons are still very much present.

Furthermore, smaller numbers of rockets have launched sporadically since then. The events of June 19 illustrate the ominous new escalation game. After kites and balloons ignited twenty fires in Israel that day, the IDF retaliated that evening by bombing three Hamas targets in Gaza. Militants there responded by launching forty-five rockets and mortar shells, six of which damaged Israeli communities. The IDF then replied by bombing another twenty Hamas targets.

Both rockets and kites are competitive at causing property damage. During Israel’s 2012 Operation Pillar of Defense against Gaza, the damage per rocket fired averaged around $9,800. (It averaged about $8,400 during 2014 Operation Protective Edge.) By comparison, the average kite only inflicts some $4,200 of direct losses, but fire kites also cost very little to make.

However, the kites are not so good at inflicting indirect costs on Israel. Whereas kite fires mostly worry farmers and foresters near Gaza, rocket attacks hurt tourism and other business activity across much of Israel. The country's economy lost about $30 million per day during Pillar of Defense and $24 million daily during Protective Edge.

Viewed another way, each rocket, and mortar shell Gaza fired during Pillar of Defense corresponded to total Israeli costs of $490,000 for property damage, lost business, and military expenses. The total soared to $750,000 per projectile during Protective Edge. Those are significant numbers for such simple weapons.

By contrast, Israel’s human losses per rocket have declined over time. It took 271 rockets on average to kill one Israeli civilian in 2012, but 1,484 in 2014. The rockets-per-injury ratio similarly jumped from 5.5 to 35.

What happened was that the rockets themselves did not become less lethal, but instead, Israel's defenses improved. For example, Iron Dome batteries intercepted more rockets, while sirens and shelters protected more civilians. Without those measures, Israeli rocket injuries and deaths during the 2014 operation could have totaled 2,200 instead of eighty-five.

The contrast between falling casualties and rising expenses means the financial aspects of Gaza’s aerial threats have grown relatively more important. Much like the kites, rockets now make Israel bleed cash instead of blood. Protective Edge, for example, cost the country some $3.5 billion but involved just five rocket and mortar deaths. (Of course, even those five deaths were too many—although routine traffic accidents killed Israelis six times as fast.)

More Israeli cash was also expended to achieve that result. The country spent billions of dollars developing, deploying, and reloading Iron Dome interceptors. (Although U.S. funding covered $1.3 billion.) Moreover, Israel spent another half billion upgrading civil defenses. Its per capita military spending is the second highest in the world. (American aid helps there too at $3.8 billion this year.) In effect, those capital investments have converted most of Israel’s human losses into financial ones.

Ironically, this defensive success hinders the country’s diplomacy. Its low civilian casualties make it difficult to get international support when its F-16s bomb Gaza. The IDF worries about similar controversies arising if it starts shooting Palestinian kite-flyers.

All this means more frustration for the frustration-filled Israel-Gaza standoff. Gaza’s kites and balloons cause relatively minor damage, but they inflame tensions and trigger risky escalations. Its rockets could inflict enough casualties to provoke massive Israeli retaliation and expenditures, but not threaten its livelihood or existence. Meanwhile, Israel’s high-tech defenses protect its people but not its finances, while leaving it no closer to stopping Gaza’s low-tech aerial assaults.

Michael J. Armstrong is an associate professor of operations research at Brock University. His recent research examines “The effectiveness of rocket attacks and defenses in Israel”.

Image: An Israeli soldier watches a chopper land on a military area in Kerem Shalom at the border with Gaza June 28, 2006. Israel fired artillery shells into the northern Gaza Strip on Wednesday as troops and tanks prepared to widen an offensive aimed at forcing Palestinian militants to release an abducted soldier. REUTERS/Ronan Zvulun (ISRAEL)