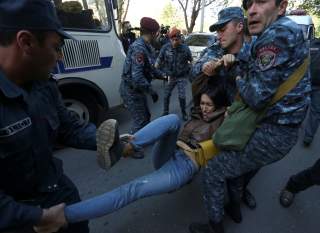 The political crisis in Armenia has intensified after Prime Minister Serzh Sargsyan’s resignation and shows no signs of ending. This crisis proves that Russia maintains two major levers of influence over Armenia: Armenia’s corrupt oligarchic system and the military threat stemming from Azerbaijan.

Azerbaijan’s leader, Ilham Aliyev, has maintained a zero-sum approach to the conflict in Artsakh (formerly Nagorno-Karabakh) for approximately the last ten years. This is largely because Aliyev has used his country’s profitable oil exports to fund a massive military build-up. As Azerbaijan has grown rich and powerful, its relationship with Russia has improved. Russian President Vladimir Putin has become increasingly willing to bargain with a more powerful Azerbaijan at Armenia’s expense, effectively abandoning his traditional alliance with Armenia.

Russia’s shift in alliances has resulted in the marginalization of Armenia. This shift has included a refusal to adhere to the OSCE arms embargo to the conflict zone. In doing so, Russia has ignored the interests of the region. Since 2010, Russia has procured up to five billion dollars worth arms and military equipment for Azerbaijan while subsequently delaying weapons sales to the Armenian side. This has increased the risk of war by tipping the balance of military power in Azerbaijan’s favor. Such lopsided weapons sales became a major contributing factor in causing that Four-Day War of April 2016, a conflict that resulted in Armenia losing territory for the first time since 1994.

Even though the political crisis in Armenia lessened with the election of opposition leader Nikol Pashinyan as Prime Minister on May 8, the situation nevertheless remains tense. This ongoing political crisis still provides a unique opportunity for Russia and Azerbaijan to make territorial gains through the use of force. In order to appreciate how powerful and intractable Armenia’s domestic crisis is, it helps to recall its origins.

Rapid privatization and cronyism following the collapse of the Soviet Union created an autocratic system of governance in Armenia based firmly on nepotism and politicized oligarchism. This followed a similar pattern throughout many former Soviet Republics when they began their haphazard economic transitions. The result has been a large concentration of wealth amassed by semi-competent individuals. These oligarchs funneled national wealth abroad for themselves and away from government coffers.

The ousted Prime Minister, Sargsyan, was one of the oldest, long-time leaders of Armenia and was a protector of the oligarchy and pro-Russian order. He was the one who changed the Armenian constitution from a presidential to a parliamentary republic. Sargsyan also followed the footsteps of Putin, and Turkish leader Recep Tayyip Erdoğan, by using constitutional reforms as an excuse to maintain and grow his power. However, his attempts at consolidating power drew  unprecedented protests in the capital of Yerevan. These protests were also the culmination of years of growing political unrest over everything from transportation fee hikes, electricity price increases, and even concerns over possibly surrendering parts of the disputed territories in what is now Armenia’s defacto province of Artsakh.

Sargsyan was able to overcome these protests and paper over domestic crises for a while by assuring everyone that, as a veteran of the Karabakh War in the 1990s, he was the one to ensure protect Armenia and Artsakh from Azerbaijan. However, because of economic problems and Russian support for Azerbaijan, Armenian military superiority would not last. The illusion of Sargsyan as protector would be shattered by Armenian military defeat in Artsakh during the Azerbaijani offensive of early April 2016.

It was during that Four-Day War that, according to Armenia, 800 hectares of land were lost (Azerbaijan claims it was up to 2000 hectares). That minor military triumph was largely a moral victory, and was followed by rare Azerbaijani media forays to the frontlines. The Azeri media barrage was intended to show off newly captured heights and a village in order to boost their leader, President Ilham Aliyev.

Armenian authorities repeated incessantly that the Armenian side won because the Azerbaijani offensive did not achieve its perceived military goals. They maintained, that while Azerbaijan had observable military superiority buoyed by its oil wealth, the attackers could not break the lines of the Joint Armenian Armed Forces (JAAF). This latter part was true, but only because of the flood of support from Armenia proper and the worldwide Armenian Diaspora. Sargsyan was caught flat footed and realized that any loss of land would never be considered a victory. Indeed, one meter of surrendered land would have been considered too much given the current political climate in the country. What made the loss worse for the public was that at the time, President Sargsyan tried to downplay the loss by commenting the territory lost was a wasteland. The rapidly changing political landscape in Armenia, coupled with Sargsyan’s ouster, may encourage Azerbaijani military adventurism. Therefore, the election of Pashinyan and his team of reformists is an attempt by Armenian voters to undo the oligarchic system they’ve been stuck with since independence and to find find someone who will ensure their security.

As Russia maintains the illusion of neutrality vis-a-vis the Armenian protests that ousted Sargsyan, Russia’s Medvedev and Kremlin-backed interim-Prime Minister Karen Karapetyan, exchanged a phone conversation the same day rumours of Karapetyan’s resignation began to spread in Armenia. That same day Karapetyan, who was also a former chief executive of Gazprom Armenia, refused to meet with Pashinyan, leaving observers wondering what was going on. The phone call between Karapetyan and Medvedev was followed by another phone call with Vladimir Putin. Karapetyan then flew to Moscow on April 28. Local media reported that Sargsyan, along with his predecessor, Robert Kocharyan, also flew to Moscow on May 1. While making Pashinyan leader of Armenia seemed tolerable, it was obvious that Moscow would prefer someone who would toe Putin’s line with greater predictability.

Meanwhile, some groups in Armenia’s ruling party tried to play up the Azerbaijan threat to coerce protesters to accept them as viable and more seasoned leadership. However, it was also clear that Karapetyan’s desire to grab the power received no support by the majority of those in the ruling party and therefore could not stay in as interim PM.

While this crisis continued, Azerbaijan has continued to deepen its alliance with Russia. Since its April 2016 offensive, Azerbaijan has concluded two extensive deals with BP and Statoil. Subsequently, the message to Azerbaijan from the West has been, if conflict is localized in Artsakh and does not threaten pipeline infrastructure, then Azerbaijan has a freehand to push militarily against Armenia and Artsakh. In fact, the decision by Western oil companies to ignore the risk of war and carry on with business as usual is in and of itself a contributing factor to a possible escalation of hostilities.

Furthermore, the United States also failed to condemn Azerbaijan’s use of force against Artsakh. The U.S. also remained silent even after the discovery that Azerbaijani Army officers trained by the U.S. Army had been involved in the fighting. Those two officers were Colonel Vugar Yusifov and Lieutenant Colonel Murad Mirzayev. Yusifov was trained at the U.S. Army Intelligence Center and Mirzayev completed Marine Corps training courses in Virginia and North Carolina. He also attended the Defense Language Institute in Texas. Both of these U.S.-trained Azerbaijani officers were found killed in action in the Armenian village of Talish. The use of U.S.-trained men in the conflict means that Azerbaijan is confident it won’t face pressure from either Western business interests or governments.

The question now is what Russia will do with its influence and pressure in the region against Armenia. How will it utilize Armenia’s domestic political crisis and a more powerful Azerbaijan?

Azerbaijan may be tempted to take up Russia’s original suggestion for what to do next, the Lavrov plan, whereby Azerbaijan will gain a number of regions controlled by de facto Artsakh and Joint Armenian Armed Forces, in return for the deployment of Russian peacekeepers and greater Azeri integration with Russia. Yet the temptation for being a tool in Russian designs for the region could backfire for Azerbaijan, because the JAAF actions will be less controlled by Russia should conflict arise. The Armenian side will also be more desperate and willing to fight back. Additionally, Russia itself can’t allow significant territorial transfers to Azerbaijan without bringing in their own peacekeepers to maintain control. Putin knows Russian boots on the ground will yield an additional lever in Moscow’s hands to mitigate Azeri sovereignty. Aliyev also knows this and therefore agreeing to the Lavrov plan would be a tough pill for Azerbaijan to swallow.

However, on the other hand, the likelihood of cooperation between Azerbaijan and Russia is high because of a convergence of both nations’ interests. Azerbaijan’s economy has not recovered from the economic downturn the country suffered with the fall of the oil prices in 2015 and that too will give Aliyev impetus for distracting the public from domestic politics. Aliyev does not need his people to think that another national destiny or domestic political arrangement is possible. He would also want to be sure to avoid any coups, many of which took place during the early years of the republic. Finally, Aliyev is also cognizant of the fact that even another small territorial gain will boost his public image as it did in April 2016.