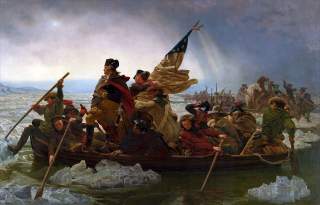 ON FEBRUARY 27, Sen. Ben Sasse spent about forty-two minutes reading George Washington’s Farewell Address on the Senate floor, an annual tradition—with readers from alternating parties—since 1893. (The first reading was in 1862, to a joint session of Congress. Annual Senate readings began in 1896.) Once Senator Sasse completed this extended oration, however, viewers quickly learned that while today’s senators value the tradition sufficiently to select one of their number each year to maintain it, they appear to view the individual so honored as a ritual sacrifice whose dutiful reading excuses his colleagues from attending the event and perhaps also from contemplating Washington’s advice. When Senator Sasse concluded this noble duty, the Senate’s presiding officer noted “the absence of a quorum” in the chamber and, as the camera’s field of view widened, the broader perspective revealed rows of empty desks.

For anyone living and working within the capital’s political bubble, it is hardly news that busy senators may consider other obligations—constituent meetings, briefings, fundraising calls, reviewing legislation—more pressing than a former president’s parting thoughts, especially when presented annually and in convoluted eighteenth-century prose. Indeed, the House of Representatives gave up its own yearly readings of Washington’s Farewell Address in 1979. Still, like many political rituals, this one appears to have preserved form without content. It has largely lost whatever symbolic power or social value it once held.

John Avlon’s Washington’s Farewell: The Founding Father’s Warning to Future Generations is a welcome reminder that the lessons America’s first president internalized from the revolution, the flawed Articles of Confederation and his two terms as the nation’s first chief executive retain considerable worth over two centuries later. “A work of popular and practical history,” as Avlon describes it, rather than a scholarly assessment, the book is timely, engaging and useful in telling the story of Washington’s Farewell Address, distilling some of its main themes and reviewing its subsequent impact on America’s political debates. While the book is not quite politically neutral, Avlon’s preferences are usually sufficiently subtle to avoid detracting from the work.

Avlon divides his book into three sections: a brief history of the address, a summary of what he describes as Washington’s “pillars of liberty” and a review of its later resonance. Since the book is a work of popular history and is relatively short, Washington aficionados may find that Avlon traverses expansive historical terrain at too swift a pace, sacrificing important detail in the process. Any effort at readable popular history requires compromises.

The central section of Washington’s Farewell—on the pillars of liberty—form not only the physical core of the book, but also the core of Avlon’s message to modern-day readers. He plucks six themes from the speech: national unity, political moderation, fiscal discipline, virtue and religion, education and a foreign policy of independence. Each has demonstrable modern-day value, though Avlon’s inclusion of education is questionable in view of Washington’s decision to allocate only two sentences to the topic in the address. Avlon justifies this by describing Washington’s long-term commitment to education (perhaps connected to the general’s limited formal education), his desire to establish a national university, and Alexander Hamilton’s successful effort to persuade Washington to move the topic from the farewell to his final address to Congress, which Hamilton argued should focus on policy objectives.

Avlon’s case may not be unreasonable, but another author could easily have excluded education from the six pillars and included law and order in its place. Just two years after the Whiskey Rebellion, Washington’s farewell insisted that

this government, the offspring of our own choice . . . has a just claim to your confidence and your support. Respect for its authority, compliance with its laws, acquiescence in its measures, are duties enjoined by the fundamental maxims of true liberty.

The “law and order” passage is significantly longer than Washington’s comments on education and at least equally supported by his earlier statements and efforts. Considering that Washington’s use of federal troops to put down the Whiskey Rebellion asserted federal power at the expense of the states, it is also consistent with Avlon’s later discussion of competing efforts to appropriate Washington by North and South before and during the Civil War. Washington’s conservative disposition is likewise visible when he urges “not only that you steadily discountenance irregular oppositions to [the government’s] acknowledged authority, but also that you resist with care the spirit of innovation upon its principles, however specious the pretexts.” This is the prelude to Washington’s well-known assault on “the spirit of party.”

That text, and Washington’s subsequent elaboration of his foreign-policy principles, are justifiably the best-remembered components of the Farewell Address and contain a compelling “warning to future generations,” as Avlon’s subtitle puts it.

WASHINGTON’S WARNINGS about “the spirit of party” reflected both his personal frustrations as a president unable fully to reconcile partisan cabinet members as well as a reasoned concern—widespread among the Founders—that past efforts to establish republics ultimately failed. In introducing the book, Avlon usefully recalls “the founding fathers’ fascination” and even “obsession” with ancient Greece and Rome, noting that Edward Gibbon’s History of the Decline and Fall of the Roman Empire, whose first volume appeared in 1771 along with Adam Smith’s The Wealth of Nations, was a bestseller in colonial America. This is an essential point: it conveys the sense of fragility with which Washington viewed America’s institutions and society as president and explains his motives in urging the country’s emerging partisan forces to avoid destroying their new nation. Washington and the other Founders recognized that succeeding in the American experiment would require breaking past cycles of history that had endured for thousands of years. It would also require contending with fundamental forces of human nature.

While Avlon aptly refers to Washington’s calibrated statement that party sentiments were “a fire not to be quenched” that required “uniform vigilance . . . lest instead of warming, it should consume,” he puzzlingly abridges another of the departing president’s statements on the dangers of partisanship in a manner that subtly changes its meaning. After acknowledging that the spirit of party is “inseparable from our nature” and asserting that in governments “of the popular form, it is seen in its greatest rankness,” Washington argues that a hyper-partisan republic could ultimately be no better than despotic rule:

The alternate domination of one faction over another, sharpened by the spirit of revenge, natural to party dissension, which in different ages and countries has perpetrated the most horrid enormities, is itself a frightful despotism.

Avlon omits the first words of this sentence, “the alternate domination of one faction over another,” making it appear that Washington is denouncing “the spirit of revenge” as despotic when, in fact, his concern is with rule by alternating vengeful political parties, each seeking payback for indignities suffered while out of power. Since this warning seems especially well-suited to the last two decades in American politics, Avlon’s incomplete citation is confounding.

Nevertheless, Avlon adds to the meaning of the Farewell Address in other ways. His frequent use of contemporary correspondence and other records illustrates and broadens its context. In considering today’s partisan battles, his citation of one of Washington’s missives to Alexander Hamilton—encouraging Hamilton to reconcile with Thomas Jefferson—seems particularly constructive. “It is to be regretted exceedingly,” Washington writes,

that subjects cannot be discussed with temper on the one hand, or decisions submitted to without having the motives which led to them improperly implicated on the other: and this regret borders on chagrin when we find that men of abilities—zealous patriots—having the same general objects in view, and the same upright intentions to prosecute them, will not exercise more charity in deciding on the opinions and actions of one another.

Washington’s statement demonstrates that he saw the corrosive consequences of declining personal trust between Hamilton and Jefferson. Given their roles as leaders in partisan disputes, as well as Washington’s wartime experience with a sometimes-factionalized officer corps in the Continental Army, he almost surely contemplated the wider implications of a breakdown in trust between rival groups, each challenging not merely its opponents’ policies, but their motives as well. Only by focusing on one another’s “upright intentions” and shared general goals could America’s political leaders serve the interests of the nation. From this perspective, mutual trust simultaneously constrains expressions of partisan passions and facilitates political compromise on major issues. Modern-day Americans know well the results of its loss.

IN SUMMARIZING Washington’s foreign-policy message, Avlon approvingly describes Washington’s “vision of peace through strength” as an approach “vindicated over time.” More concretely, Avlon distills what may be the first president’s most useful foreign-affairs advice for the twenty-first century, “that America should be a beacon of freedom—leading by the power of our example more than the example of our power—but we should resist the temptation to try to export democracy abroad by point of bayonet.” Avlon is likewise correct in asserting that the “true message . . . is not isolation but independence, striking a wise balance between realism and idealism.”