Georgia Has a Key Role to Play in Europe's Future 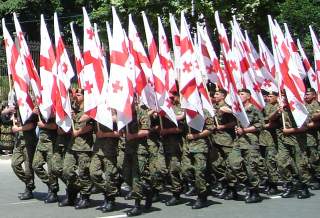 In the 1990s Europe was coming together, politically, economically and institutionally. That was a project associated with the emergence of the United States as the last remaining superpower. One generation down the line, leaders as diverse as Donald Rumsfeld and Angela Merkel agreed that “the West” is no longer a geographic specification. The Euro-Atlantic “community” refers to nations that opt for certain kinds of sovereignty, values, norms and institutions. We live in societies with open markets, a democratic level playing field, rule of law and freedom of speech. And we defend them together. One thing is certain: Europe cannot go back to being divided into spheres of influence, for practical rather than ideological reasons.

Georgia is a European democracy, with checks and balances, an electoral level playing field, the rule of law and the freest media landscape in Eastern Europe. On the foundations of strong institutions and political accountability, the country develops an attractive economic narrative. Located between emerging and developed economies, Central Asia and Southeastern Europe, the Caspian and the Black Seas, Georgia is attractive because it facilitates all kinds of flows: data, energy, talent, goods and services. Georgia’s comparative advantage is location, but its location is relevant because of governance.

Situated at the tip of the ancient Silk Road, Georgia is contributing to its reanimation. Tbilisi has concluded a Deep and Comprehensive Free Trade Agreement with the EU, preferential trade agreements with the United States and Japan, and is nearing the conclusion of a Free Trade Agreement with China. Beyond market access, Georgia offers one of the easiest places to do business in the world, with low regulations and a low taxation regime. Increasingly, the software matches the hardware, with private investment in state-of-the-art infrastructure, in transport and logistics, energy, tourism and human resources.

Georgia claims for itself the role of Europe’s launchpad to Asia and vice versa. Georgia combines Alpine and Mediterranean landscapes and is part of an energy highway from the Caspian Sea to Europe. And with the completion of the Deep Sea Port of Anaklia, Georgia will emerge as a logistics hub for a landlocked Central Asian market of 160 million people. Through Georgia, bullet-speed trains will go from Xinjiang to Madrid in fewer than twelve days.

Naturally, an open economy goes hand-in-hand with concerns about external volatility: labor market disruption, fluctuating energy prices and exchange rates. But Tbilisi is determined not to become one of those ghost towns buckled up in “sovereignty without a cause,” like Yalta, Donetsk, Tiraspol, Sokhumi and Tskhinvali. In such places, recognized only by Russia, there is no investment, no growth, no opportunity, no social mobility, no citizenship and no democracy. Russia occupies 20 percent of Georgia’s sovereign territory, but the only choice we have is to keep calm and carry on. We cannot and will not become a ghost town.

Like every U.S. and European administration, every new Georgian government comes to power with the ambition to reach out to Russia. And we do. Each administration reaches out to Russia, harnessing every conceivable channel of communication: diplomatic, academic, cultural, entrepreneurial and even religious. But Georgia’s choice has never been between East and West. The choice is between substantial sovereignty and colonization. Tbilisi has left behind messianic politics and is building a state with strong institutions, a level electoral playing field, rule of law and European human-rights standards first and foremost for its citizens. And that kind of society has yet to flourish in states and territories that Russia regards as its Near Abroad. But Russia engages in diplomatic negotiations to win, not to reach an understanding.

Russia has an imperial culture. Sovereignty for Russia is control over people, states, resources and territories. Control takes precedence over economic instrumentality, as additions to its sphere of influence often become dead weight, costing Moscow in terms of welfare expenditure and budget subsidies. Russia suzerainty is less about “assets” and more about the legitimacy of a strongman culture that scorns citizenship and rule of law, and hails power than can be visibly demonstrated. Georgia will not play along.

Georgia plays a role in the Euro-Atlantic alliance. Because of its location, Georgia is an indispensable partner in the fight against the traffic of arms, nuclear materials, biological agents and ISIS fighters. And Georgians have fought in Iraq and Afghanistan, as well as in Kosovo, the Central African Republic and the Mediterranean. And Georgia carries its own weight. In per-capita terms, Georgia’s contribution to ISAF was second only to the United States, and the country has spent consistently more than 2 percent of its GDP on defense. These are not choices against Russia; these are choices telling of what Georgia wishes to be as a state.

Situated at the intersection of the eastern and southern flanks of the alliance, Georgia can be the point of departure for NATO’s 360-degree strategy. But Georgia is a member of an alliance, not an outpost or a Checkpoint Charlie trying to dragging its allies into a confrontation with Russia. Clearly, Europe is not moving towards a new Cold War or a new understanding of spheres of influence for at least two reasons: first, there is no neat division of the world among two superpowers; secondly, there is no longer a choice between sovereignty and international engagement.

Unlike the Cold War, there are today at least three world-class superpowers and several regional powers. The sovereignty of Western states is realized through their alliance, and is in many respects its precondition. Unlike the Cold War period, there are forces that dwarf individual sovereignty, economically and politically. No one can go it alone, like farmers plowing their plot. States rely on each other to address threats in cyberspace, terrorism or even to coordinate monetary policy and regulate multinational industries. All politics are local, but nearly all policies require transnational cooperation. We look after our garden, together, or take our chances in the jungle, alone. Georgia has made a clear choice.

Ambassador Tedo Japaridze is Foreign Policy Adviser to the Prime Minister of Georgia.