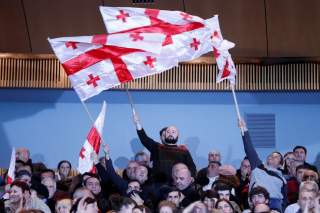 Amidst the myriad campaign posters plastering Tbilisi in the lead up to last month’s first round of presidential elections, an inconspicuous symbol of a changing political tide: green pine cone stickers. The pine cone, or girchi in Georgian, is the unassuming mascot and namesake of the former Soviet republic’s newest political disruptor—a libertarian party led by the spirited firebrand Zurab Japaridze. In a country plagued by an ever-looming Russian presence, corruption, media manipulation, harassment of civil society and even a reclusive oligarch who pulls the strings from a glass castle overlooking Tbilisi, Japaridze’s nascent libertarian movement is employing wildly nontraditional tactics to build a profile as the arbiters of an alternative to the nation’s toxic politics.

On November 28, Georgians headed back to the polls for the culmination of a runoff election between Salome Zurabishvili and Grigol Vashadze. Zurabishvili is backed by former prime minister, Bidzina Ivanishvili, the country's richest man who is said to exert the great amount of political influence in the country, including Zurabishvili’s candidacy. Vashadze, who came in second place, was backed by former president Mikheil Saakashvili, a polarizing figure in Georgian politics who is credited with positive political and economic reforms, but who is also criticized for his heavy-handed tactics in his approach to law and order. The first vote on October 28, which did not produce a clear winner, was marred by the frontrunners lobbing accusations at each other of being beholden to Russia.

Receiving only 2.5 percent of the vote, Japaridze’s Girchi party is out of the running for the longshot presidential seat for now, but this may be the beginning of the story for Georgia’s libertarians. His goal was to run for president in order to create even more recognition for the Girchi party ahead of the upcoming parliamentary elections. Girchi could become a much sought after coalition partner for any party wanting to form a governing majority in parliament. This strategy might pan out: several people in their twenties told me they wanted to vote for Girchi in the presidential election but thought it would be more strategic to throw support to the more serious opposition candidate to force a second round of elections.

I met Japaridze on a recent trip to Georgia with the German Marshall Fund. A former surgeon and member of parliament, he is no stranger to controversy: three days before we met, he had spent a brief stint in police detention for handing out joints at a political rally. His party supports free-market macroeconomic reform, less state intrusion in individuals’ lives (including the decriminalization of marijuana), and lower taxes along with EU and NATO membership for Georgia.

The Girchi party is taking a creative tactic to allow Georgians to sidestep the country’s mandatory military conscription. Whereas the rich can defer conscription by paying the government an annual fee, this is out of the reach of most poor Georgians, who end serving in the frontlines of faraway conflicts like Afghanistan and Iraq. It has received a tremendous amount of public recognition for setting up the Christian Evangelical Protestant Biblical Freedom Church of Georgia, a church whose sole purpose is to allow young men to avoid forcible conscription into Georgia’s military service. Clergymen are exempted from conscription, and this new church had already ordained twelve thousand priests. In a country where the Georgian Orthodox church and the military are viewed as the most respected institutions within society, this was a bold move that got Girchi the press attention it very much desires.

Founded in 2015, Girchi didn’t yet officially qualify as a “registered party” in last month’s presidential elections due to Georgian election regulations. Instead, Zurab ran as an independent and found a unique workaround the ensures that the name of his party still appeared on the ballot. He petitioned Georgia’s electoral authority to add the word “Girchi” to his name—making it Zurab Girchi Japaridze.

When it comes to those green pine cone stickers—the only sign that the party was even in the running—it’s an advertising strategy that came down to cost. Posters are expensive to print, stickers are much cheaper, and the party’s enthusiastic backers are willing to go out and put them up. The pine cone harkens back to the decision to give the party what Zurab calls “a crazy name.” People laughed about the decision, but it has indeed aided brand recognition amongst young Georgians. Girchi is also the only political party in the running to have taken out adds in pornography websites, which again, got the media talking. Another example of the Girchi mindset that there is no such thing as bad press.

Japaridze listens closely to its mostly youthful supporters (according to Girchi’s own data, about 70-75 percent of their supporters are aged 18 to 34) is which is why he chose to focus his efforts on conscription, marijuana and LGBT rights (gay marriage is illegal in Georgia). Zurab is very active on Girchi’s Facebook page, where he posts videos daily and engages with followers and detractors alike. He started his outreach by translating and uploading short videos about libertarian ideas of individual freedom and personal responsibility from sources within the American liberty movement such as the Foundation for Economic Education, Free the People, Learn Liberty, as well as some authored by famous classical liberal luminaries like Nobel-prize laureate Milton Friedman and TV anchor John Stossel.

Georgia-watchers will have to see if Girchi sustains its public relations campaign long enough to successfully run in the upcoming parliamentary elections in 2020, but regardless, the party seems to be successfully tapping into a cultural undercurrent amongst Georgia’s younger citizens. Georgians I spoke with seemed genuinely enthusiastic about giving Girchi their vote in the upcoming parliamentary elections. A seat at the table for these upstart libertarians could mean a new direction for Georgia, a nation that emerged from decades of suppression from Soviet rule but has yet to achieve the individual freedoms that its population is clamoring for. In the meantime, supporters will wait and see if the party of the pine cone can build the momentum it needs to see through its vision.