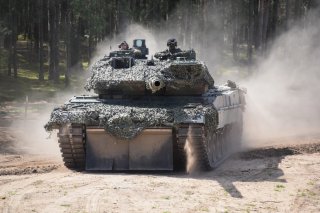 With the decision to send tanks to Ukraine and increase artillery production sixfold, America and its allies are moving to a war footing against Russia. Just as it took over a year to respond to Joseph Stalin’s incorporation of Eastern Europe, so the West’s determination to resist Russian president Vladimir Putin’s attempted subjugation of Ukraine has been a protracted process. Now the die is cast. Putin was convinced that he could outlast the Western alliance, but it is intent on outlasting him. Any hesitation about confronting Moscow for its depredations in Ukraine has gone by the wayside. President Joe Biden is determined to crush Russian aspirations for hegemony in Europe once and for all.

Despite initial hesitations, Germany’s Chancellor Olaf Scholz has agreed to send Leopard 2 tanks to Ukraine. His decision has both symbolic and practical import. Symbolically, it frees Germany from the strictures that it operated under after World War II. Practically, it liberates countries such as Poland and Finland to transfer German-made tanks as soon as possible to aid a forthcoming Ukrainian offensive this spring. The United Kingdom has already promised to supply fourteen Challenger 2 tanks to Kyiv. Poland and the Baltic States have been publicly pushing for Germany to abandon its ostrich-like position against aiding Ukraine with tanks. “The Leopard is freed,” declared Bundestag vice-president Katrin Goering-Eckardt on Twitter. She added, “now he can hopefully help Ukraine quickly in its struggle against the Russian invasion…” In all, Ukraine expects to receive 100 Leopard 2 tanks from twelve countries.

The driving force in altering Germany’s adamantine stance against dispatching tanks was its new defense minister, Boris Pistorius, who has made no secret of his support for Ukraine’s struggle against Russian aggression and who demanded that the Bundeswehr, as an initial step, examine its inventory of tanks. While some in the Social Democratic Party have clung to obsolete notions of reaching some kind of accommodation with Putin and his camarilla, Scholz’s coalition partners, the Free Democrats and the Greens, have been stalwart in pushing for a more hard-line stance. So has the Christian Democratic Union, whose leader Friedrich Merz declared, “it’s the right decision.” In essence, Scholz was bowing to the inevitable.

But it apparently took Biden to sweeten the pot before he would. Biden has apparently pledged to send thirty M-1 Abrams tanks to Ukraine, a move that Scholz had demanded in return for altering his previous opposition to supplying tanks to Ukraine. It’s the decision to ramp up military production of artillery that should also worry the Kremlin. Russia’s stocks are running low. America has the capability to ramp up production rapidly. Biden is signaling that America is in the fight for the long haul. Rep. Rob Wittman is calling it a “Sputnik” moment. Neither Republicans nor Democrats are unaware that expanding military outlays amounts to a jobs program for Americans.

The blunt fact is that Biden is becoming a war president. Putin reckoned he could roll over Biden. He miscalculated. He thought he could sweep over Ukraine in a week. He was wrong. He thought the Western alliance would crack up. Wrong again.

No one has done more to revivify the Western alliance than Putin. As the West ramps up military production, he is mired in a conflict that threatens the continuation of his tyrannical rule over Russia. Now that he has inadvertently aroused America from its post-Cold War torpor and unified Ukrainians in their resolve to oppose him, Putin faces a fight to the finish—one that he cannot win. It is now clear that when Putin invaded Ukraine, he signed his death warrant.